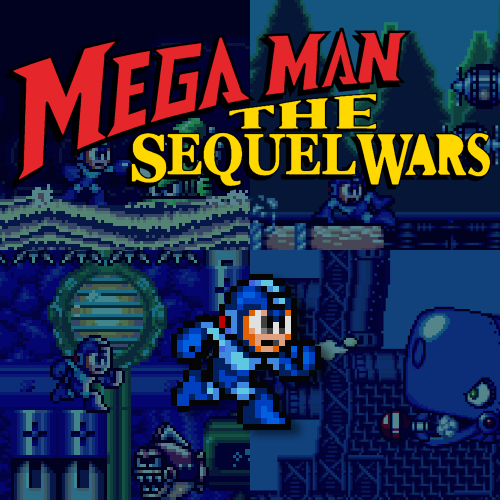 ​
Mega Man: The Sequel Wars is a fan-made homebrew remake of Mega Man 4, 5 and 6 for the Sega Mega Drive, following in the footsteps of the officially released Mega Man: The Wily Wars. It aims to carefully recreate the NES classics while giving them a fresh 16-bit coat of paint and a rearranged soundtrack. More than that however, it also aims to bring a slew of new content, both through complete re-imaginings of the classics in EX Mode and a new gauntlet of levels in Wily Tower 2. And it all runs on the original Mega Drive hardware!
Debuting in SAGE 2022 is a demo of the game featuring various remade and new levels.
NOTE: this is not a rom hack of Wily Wars! It is fully coded from scratch in C using the SGDK library. As such, the game will be distributed as full ROM releases as there is no original game to patch to.

FEATURES​
-Faithful recreations of the original games, with extensive research done to make everything accounted for.
-Loads of new content including a full-blown reimagining of the originals with new enemies, mechanics and bosses in EX Mode, a completely new set of levels in Wily Tower 2, and even a 4-player competition mode in Metall Party!
-Smooth controls that avoid all of the shortcomings of the original Wily Wars and its control issues.
-Refined 16-bit graphics that use the Mega Drive's superior visual capabilities to their fullest, with detailed environments and elaborate parallax backgrounds.
-Original soundtrack featuring both remakes of the original tunes and all-new compositions. Comes in both Classic (original Wily Wars style) and Modern (Regular) flavours.

IF THE LINK IN THE CORNER DOESN'T WORK, GET IT HERE: https://www.mediafire.com/file/hsz4a0s7mssisg0/SEQUEL+WARS+DEMO+EX+UPDATE.zip/

INSTRUCTIONS: Extract the downloaded .zip file and look for the two .bin or .gen files. These are the game ROMs and they are identical aside from the soundtrack provided. Once you choose one, you can put it onto a flash cart to run on a real console, or open it with a Sega Genesis emulator to play it on PC and a variety of other systems.
NOTE: We recommend playing the game with an accurate emulator like BlastEm. Some older emulators might run into issues with sound!

We hope you enjoy the game - have fun!

A beautiful recreation of Mega Man 4, 5 and 6 stages. Stages flow very well, graphics are lively and animated. Music renditions are very nice, my favorite being Cossack 1. Original games are respected, with hidden secrets in Toad Man and Cossack 1 being respected, and bosses like Mothraya are given a nice amount of polish. Things like the overpowered charge buster in the original Mega Man 5 has been nerfed by making it charge much slower, which is a very nice nerf.

Minor nitpicks might include Bright Man having a bit too much flashing going at once, I would probably slow it down a little bit. Dust Man might have a few too many Up'N'Downs, I might make more a visual indicator to show where they are coming out, or have them already linger above the pits before jumping over them.

Apart from that, this game looks incredible and will give many Wily Wars fans an incredible sequel with tons of replay value !
To say I am impressed is an understatement.
This homebrew really did overarchieved its expectations, and having my expectations exceeded is a great experience.
Not only it boasts great graphics, but also some nice original music and a very solid gameplay, the level design is faithful yet it feels refreshing, the fact the bosses do follow the art style but still are quite big is a nice touch.
Of course I can't forget to mention Dust Man EX's stage... sure, it's C&BT, but at least it's fun C&BT, defeating Dust Man is very sastifying in on itself.
If I have two complains it would be that I don't know why the continue option sends me to the checkpoint if I chose to have finite lives for a real game over punishment and two, on Dust Man EX at least I do get said punishment but there's a small problem, the cursor places me on "select stage" so I did accidentally went back to the stage select and lost my progress on the second half of the stage and forced to do the first half.
Other than those little complains, this demo is top notch, I am hoping to see at least one of the games completed soon.
Edit: Of course the Met Party mode is hysterical too, so, props for that.
Sequel Wars is great on multiple levels; it's a great homebrew, a great remake, and as the EX content proves, a good Mega Man game on its own. While it isn't finished yet, this is already a contender for one of the best fangames ever made. There are stunning graphical effects, smart weapon rebalances (you made Power Stone good!), and overall it's just a great love letter to three of the more underrated Mega Man classics. This is the best SAGE game this year. Outstanding work!
Read more…

eres increíble hermano,You are amazing bro, thanks for making my day
Gracias por estar cumpliendo el sueño de muchos que soñamos desde décadas el poder verlo, te mereces todo el amor del mundo.
Can't run the game, neither kega nor gens can run it, and blastem straight up doesn't work on my pc
Awesome. Consider me excited for the full version if the full game is gonna share the same quality as the demo.
I haven't tried this yet, but I'm impressed you got dynamic lighting on the Sega Genesis. How did you do that?
Amazing!!!, I hope the final version has the same quality or even better, this really is very good!!!
very good, I'm glad someone at this event makes something for a real video game with so much historical value, it proves you guys are excellent programmers
Dónde está el links de descarga?
Where download?
Mega Man The Sequel Wars is amazing and for sure one of the best Homebrew ever made of 2022! in addition, it is good in every way, whether it's improved graphics, Remake of the Music or Wily Wars style, being able to choose between the weapons of the 4 5 6 in any of the levels of the 6 games, and one of the great news is the EX MODE that It's also very good and creative! And look, this is just a demo, I hope to see this quality in the final version or even better and without a doubt in my opinion one of the best SAGE22 fan games!

(Sorry for sending another message but I definitely had to update!)
You must log in or register to reply here.