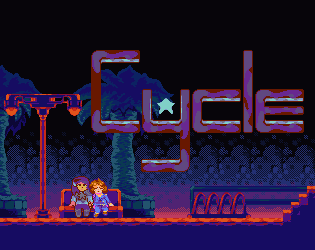 CYCLE is a metroidvania-style game, fashioned after GBA-era visuals and aestethics, and heavily inspired by the Mega Man Zero series. It is currently in development.

The tower of the Stars which powers the continent, mysteriously shuts down every few years. It's up to a hero chosen by the town to go on a journey to try and fix it and power it back on. However, it's a very dangerous journey, and not everyone returns from it. Lana's mother, Satella, never returned.

Lana is going to go on the journey to find the truth despite not being chosen by the town, and her friend, Verona, is trying to stop her from hurting herself.

In your journey to the tower, you'll visit many colorful areas, with various characters, aswell as gain some new weapons and skills to traverse the world in an easier way. Some of the areas will have boss fights that will put what you learned to the test, and there are even secret bosses for people who seek a more difficult challenge.
Reactions: Cotaku
Share:
Reddit Pinterest Tumblr WhatsApp Email Link

I loved this experience! It is such an atmospheric title that feels as if it is just brimming with lore waiting to be discovered. The sound track really adds so much to the experience, and serves as a great example how an amazing soundtrack paired with an awesome game leads to one unforgettable experience. This is definitely on my list of games to revisit after SAGE is over.

While this game is an .exe file, I was able to run it without any issues using WINE on Linux, so if you are a Linux user thinking about giving this masterpiece a go, I'd definitely say go for it.
Reactions: dvtzr
I am a close follower of this indie game from it's early life cycle™ and to see it start from a text draft to art and finally a working game build that DVTZR can show off in SAGE 2020 is really making me a happy camper since he deserves the recognition!!

The art is simple and beautiful, the music is atmospheric and complimenting. the controls are neatly polished and every time I think I see something I expect, i get thrown off the loop for something unique! please give it a try, it might be less action oriented than most metroidvania games but it really does well in it's own pace and it kind of evokes a serene feeling to it so you can take your time and play it to your hearts content!
Reactions: dvtzr
I'm not much for Metroidvania games since I usually get lost in them, I also got lost in this game... But I did manage to get to the first boss and decided to stop from there. The pixelart is really pleasing on the eyes and it gives a wonderland type of feel. Combat is quite decent and standard. If there's something I need to complain about this game is the benches, it would be more helpful if I knew what were benches since they blend in with the background and I often pass them without knowing, perhaps a highlight over it would do the trick? It's excellent otherwise.
Reactions: dvtzr
Read more…