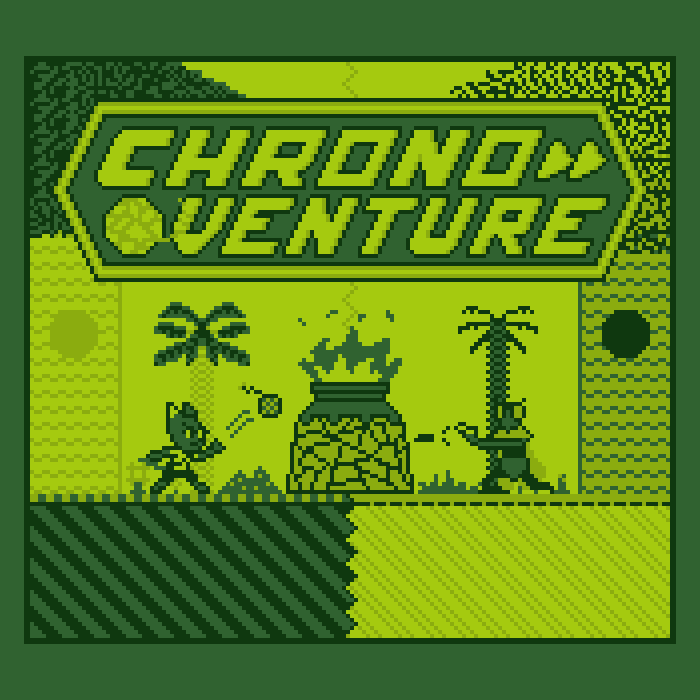 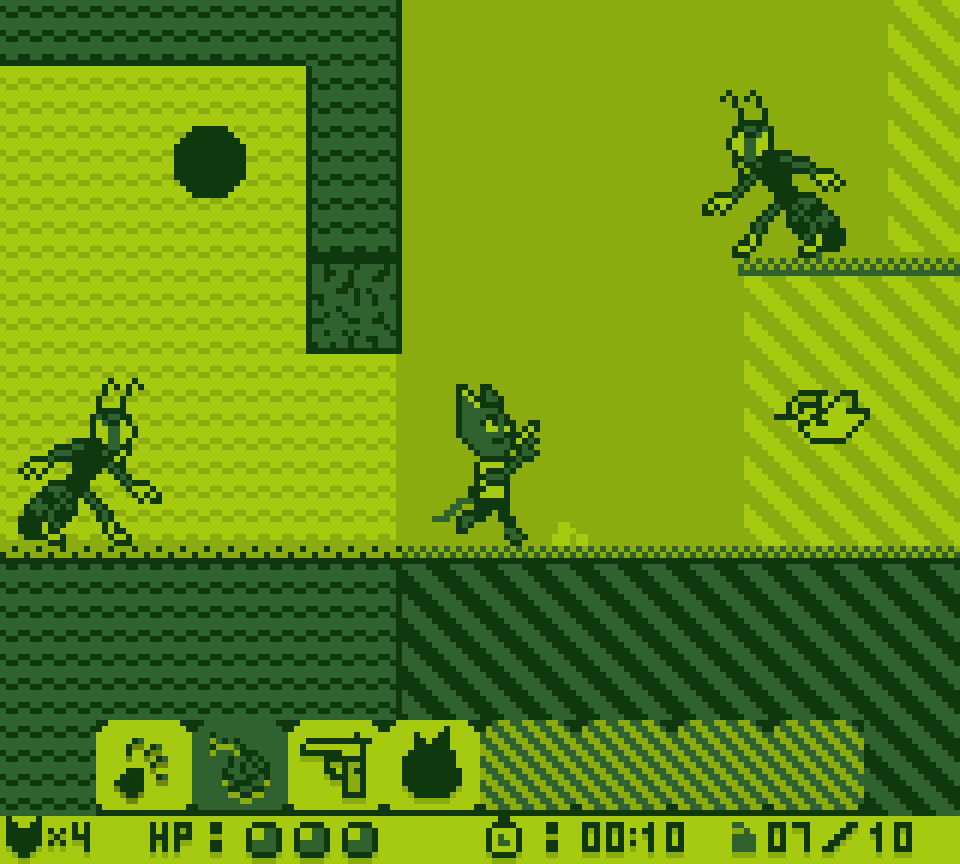 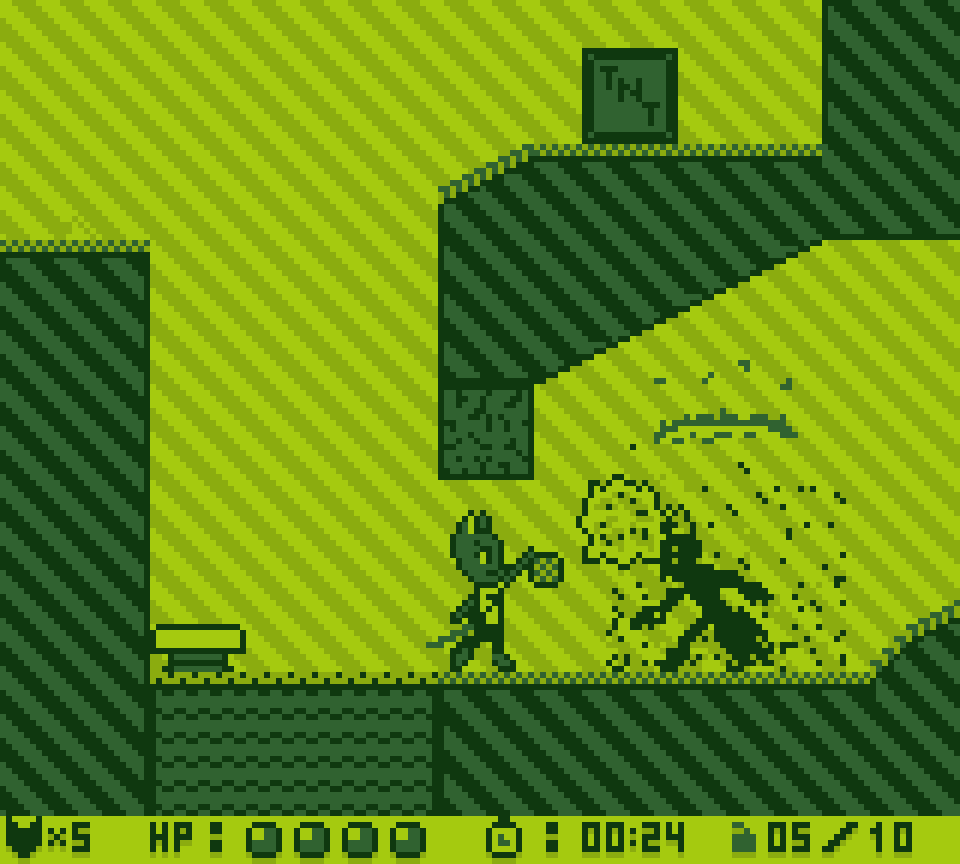 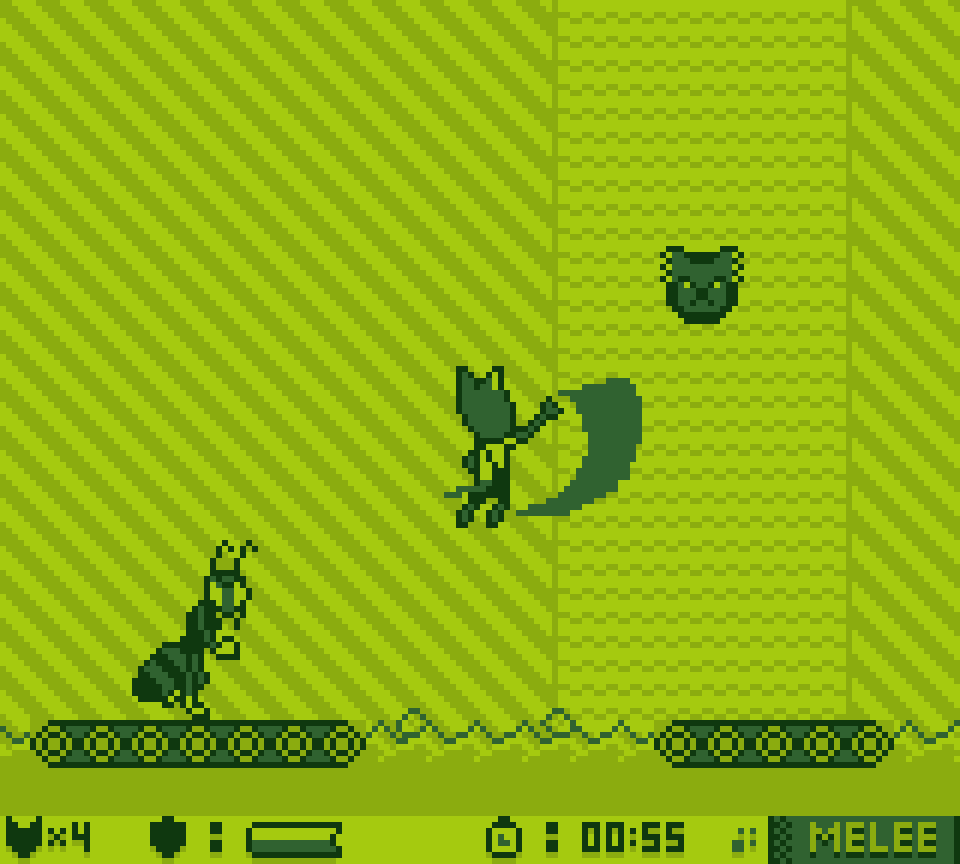 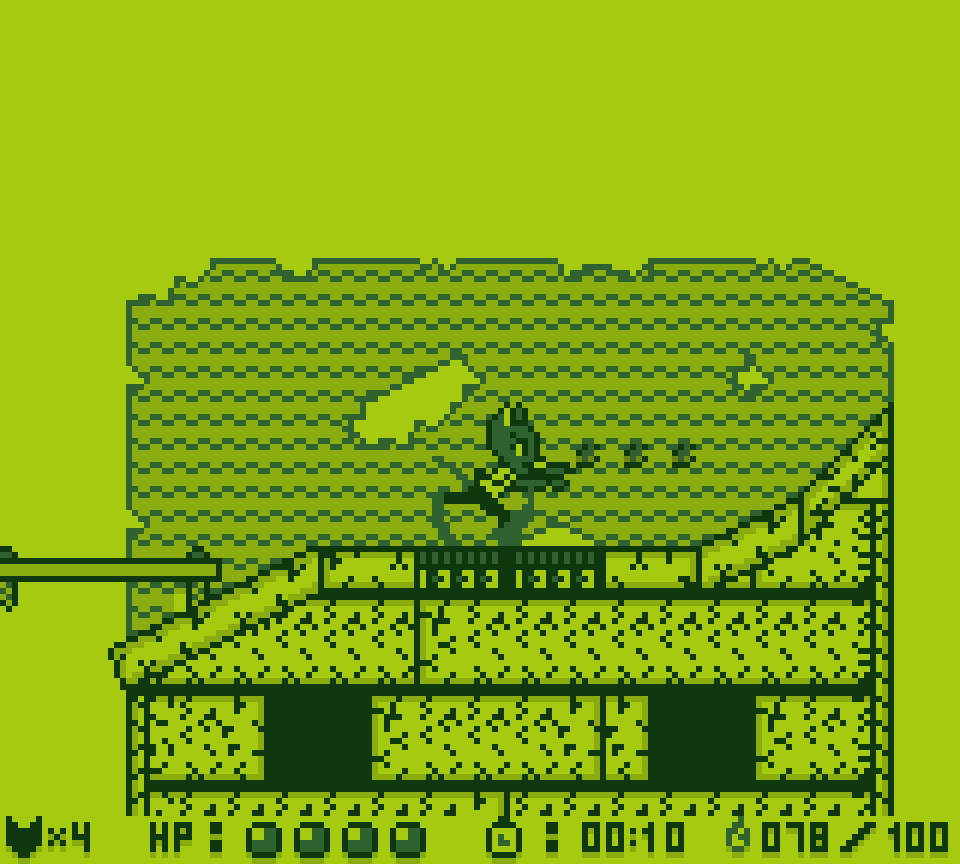 ChronoVenture is a momentum-based Gameboy-style platformer shooter where the player controls a cat named Lizzy as she runs, jumps, claws and shoots her way to the end of the level where she'll encounter against a boss to unlock a new weapon or ability before she finds herself warping into the future.

Taking inspiration from Sonic CD, you start off in Act 1 during the present or past of a stage where you can either focus on completing an objective that changes the future in Act 2 for the better or reach to the end as fast as you can for a tougher challenge.

I should clarify that this is not a real Game Boy game. This is a Windows-only game made with GameMaker: Studio that imitates to be a Game Boy game because I enjoyed playing some of those games. However, that doesn't necessarily mean I'm aiming to be hardware accurate as some modern features like widescreen support would be implemented in the future.

As this game is currently under development, your feedback and constructive criticism will be invaluable on making the game better so please contact me via email (duckilous@gmail.com) and/or follow me on Twitter (@Duckilous). Thank you!

ChronoVenture 0.1.2 Update Notes
This might be the last patch for the demo so I can work on the next major build.

Camera Panning
Screen crunch is a common criticism that this game received so camera panning has been implemented as a (default) option whenever the player moves.

Slowed Down Acceleration
The player's acceleration has been halved so they won't run too fast so quickly.

Reduced Knockback
The player's knockback has been decreased to be less harsh whenever they take damage.

Revised Enemy Placement
Some enemy placements have been changed or removed to make the game less difficult.

Doubled Yarnbomb Capacity
The player can now carry and start off with 20 Yarnbombs instead of 10.

Switch Weapon Notification
If the player hasn't switched weapons and they ran out of Yarnbombs, a text will appear above the ammo count to tell the player to switch weapons. The text will disappear once the player presses the "weapon switch" button.
Please read the "README.txt" or check the keybindings on the Controls Menu if you don't know which key/button opens up the weapon select menu.

ChronoVenture 0.1.1 Update Notes
Just as SAGE was getting started, I updated the game with some improvements.

SAGE Jingle
For the SAGE Build, the game now plays a familiar jingle in the SAGE splash screen.

Saving Settings
The game now saves your settings so you don't have to return to the Settings Menu every time you boot up the game. (Except for fullscreen currently.)

Saving Scorings
The game now saves your score if it's higher than the previous high score which is now displayed on the Title Screen.

Rebindable Keys
Selecting the Controls in the Settings Menu now takes you to the Controls menu where you can rebind keyboard keys and toggle extra keys for melee and weapon select menu.

Raining Particles
Instances of block particles and insectoid giblets will no longer be removed when out of the player's view. This change is noticeable if you destroy insectoids or blocks close to the top side of the screen.

Turn Down The Music
The Music setting in the Settings Menu is no longer binary. You can now change the volume by pressing left or right when it's highlighted.

Claws Are Not Swords
Some sprites have been updated including the slash effect of Lizzy's melee attack which should look more like a claw swipe than a sword swipe now.

I couldn't get past the 2nd level... Mostly due to the screen crunch and how the fast the character moves. But for how it is, it's a fine platformer shooter. I do like the GameBoy style you're going for, you don't see much of those. I'll wait for the widescreen to come in so I can actually see where I'm going. Otherwise than that, good looking game you have here.
Reactions: Duckilous
Read more…

Played this game on my stream!

I like this game's style and mechanics, but the screen-crunch kept killing me. I think the protagonist runs too fast, and there are a few too many leaps of faith. Otherwise, good work!
You must log in or register to reply here.