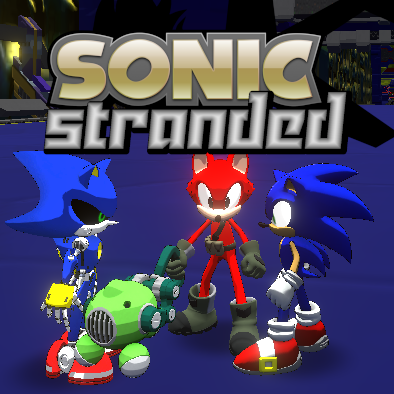 Sonic faced many dangers before, but now, he will have to face a new one... hunger. In this 3D, Adventure-like game, Sonic will be stranded on a deserted island and it's up to him to build a settlement and find other castaways, who were prisoners on Egg Carrier before it crashed. And most important, survive. However, the island has keys to many mysteries, including origins of the original Phantom Ruby...

Sonic Stranded is a 3D Sonic fangame combining classic physics-based platforming with freedom of 3D movement from Adventure series and continue the ongoing storyline of the series in a new in brand new environments with fully animated 3D cutscenes.

This demo includes 2 completely new original stages which were never seen before, even in previous demos. Each stage ends with a thrilling boss fight.

You can play as 6 playable characters, including customizable character from Sonic Forces! You can choose one of 3 Wispons available in this demo! Can't decide which character to play? Play as a team up to 3 characters and switch between them on the fly like in Sonic Heroes.

WARNING KEYBOARD USERS! I forgot to set buttons for character switching for keyboard. I'm going to make a patch to fix that, but for now, remap L2 and R2 buttons in the launcher to whatever you find comfortable.

amazing but a bit laggy though I also couldnt stop laughing when I saw "amy's eye sight" as a graphics quality also what the name of the song for the main menu because its amazing.
Reactions: Jerfer and Sonic Fan The Alex
Hey Gnidel. I just wanted to say how much you've improved this game since I've last saw it in 2018. Its really fun and has really good ideas in it. Keep up the good work!

The only negative I can say is that rail grinding is a bit off and it still has the wonky presentation. But art wise it has improved dramatically.
I see you got overlooked again. Well I, for one, think you're doing a great job. I can tell you've been working hard at this and I've noticed a lot of improvements. Mainly...well the new levels are great. I love the concept behind Portal Prison. ... and despite already forgetting the name of the second level, it was quite enjoyable. Both levels are so much more vibrant and colorful than past ones. I'm really looking forward to what else you come up with.

My main complaint is really the camera in some areas. It zooms out so much during the first boss, and the bombs are so big that it's really hard to see where Sonic is sometimes. It was an issue in some areas in the second level (like with the big cork screws) and again, during the second boss. It's a cool boss though.

That was my only real issue with this. I did run into a couple bugs but I haven't had an issue since 3.1 so I'll assume they have been fixed but I'll let you know otherwise. Looking forward to more!
Reactions: Gnidel
E
Elton John
I like how the railing system works... Pls could u show me how to fix mine... I can't seem to get it right... By the way the game is a perfect hit to me n I will like to have the full version
Read more…

I thought the last SLS demo I played showed promise, even if it needed a lot of tweaking, so I was excited to play this one. Unfortunately, both of its stages remind me of that ARK maze stage in Shadow the Hedgehog , and that is not a good thing.

The stages in past demos had their share of disorienting moments, but at least they gave ample opportunities to play with character abilities. With these stages, it's even easier to get lost, due to the repetitive terrain, and because of how angular it is, often speed isn't even useful.

I wish I could play enough of this to see more and find some positive things to say, and given how I felt about last demo, chances are that there are things that have improved, but I simply find these stages too dull and difficult to go track down all of the characters.
for some strange reason, every time I plug my controller in, the camera spins. is there a way to fix this?
nie spodziewałem się polskiego fangamea, nawet od polskich twórców
the music is amazing! I was wondering if I could get the names of them because they're are so good! and the gameplay is great!
You must log in or register to reply here.