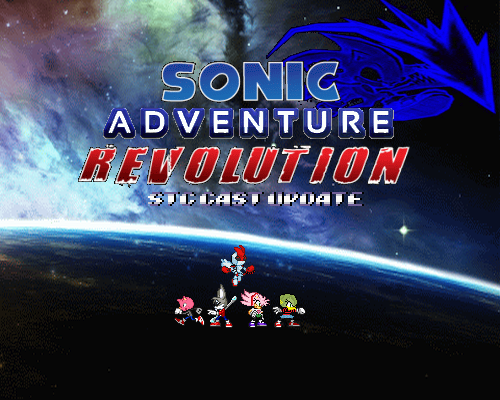 Sonic Adventure: Revolution is a beat'em up game with characters not just from the games, but other canons to, like the Freedom Fighters, Sonic's siblings from Underground, and several newly added characters from Sonic the Comic.

Once you choose a character, you're taken to a map where you can choose any stage and getting to fighting robots. There's 3D gameplay where you move in all directions, 2D where you only move left to right and can jump up platforms and back down by holding down and pressing attack, also hitting enemies under you. There's also mach speed sections, derived from Sonic 06 where you fight while contentiously running at high speed, and the new flight sections exclusive to the Campaign 2, same as mach speed, but on extreme gear. You can also summon up to 4 back up characters via menu to help you in the fight using the attack 4 button, must be mapped in the options menu. There's a bit more info in the how to play txt file included with the game.

Hidden within some stages are secret characters that help you during the stage they're featured in, such as Battletoads, Swat Kats, Ninja Turtles, Earthworm Jim, Klonoa, and more. Beat the stage they are in and you'll be taken back to the select screen, while there's no changes to the screen, you'll find the secret characters you fought with will be selectable. If you exit out of the game and go back later, be sure to select load game from the start menu, it loads some of them back as they don't automatically stay unlocked for some reason. Both campaign modes can be selected to load by pressing left or right in this menu.

SRA is also going to be changed soon where it will be going for a more fast paced style action game while still retaining beat'em up mechanics. Because of this, each character is faster then they were in previous updates, and pressing jump twice triggers aerial actions based on your character.

Note: This demo is still being developed, there's still some unfinished work concerning aerial actions, incomplete select menu, and some of the new characters.

So this is the real version of the Klonoa beat-em-up, I guess? It's alright. The screen is a bit too zoomed-out, but it does what it sets out to do.
D
D.N.T
friend you are wrong this project is older and according to my opinion is more complete, although I repeat it is my opinion

This is almost the exact same as Klonoa: Dream Trigger, but with an actual character selection. Pressing X brings up a character select, which summons other characters that I doubt you can send away. I had trouble closing the menu, too. The map screen is a pretty smart move, but otherwise, I don't really want to play much of this. I feel like this game is actually pretty decently advertised, but the character select bug turns me off. By the way, mach speed and flight scenes are the same as the normal gameplay, but with an extra obstacle in the former. The main thing that makes this better than Dream Trigger is the fact that it's actively presented as a beat-em-up.
Last edited: Oct 9, 2019
You must log in or register to reply here.