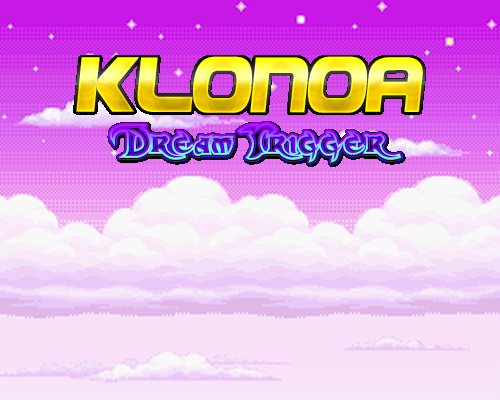 Klonoa: Dream Trigger is a small project put together just after the announcement of this year's SAGE using the OpenBOR beat'em up engine. The idea is making a game based on the Super Mario RPG, but using Klonoa to see how interesting it would be to have him in an action game and presenting him differently then his games, so I plan for the story to also take some cues from Chrono Trigger. This demo is only a concept, it's not long, with 3 stages, the first 2 have 2 parts, along with bosses and mid bosses. The music I picked includes certain Sonic vocal themes, Fighters Megamix, Megaman X4, Yakuza 0, and Three Dirty Dwarfs. I'll link a few n the media tab if you'd like to here them. My vision for the game was to have a combat system akin to Ginjirou of Guardian Heroes, with some moves/features akin to Devil May Cry and maybe Kirby added to it, combos and different abilities and the like.

Note: This is the only standalone demo Klonoa: DT will have. Any future updates will be presented within another project of mine called Multiverse Meltdown, formally Super Universe Brawl.
Download: https://www.mediafire.com/file/y3hz50ggpd8364m/Klonoa.zip/file

This one is kinda...weird. I was expecting something more, well, Klonoa-focused, and I definitely wasn't expecting a beat-em-up! It's basic, though the description effectively stated that ahead of time. I don't know how I feel about this one really, but it isn't bad!
Well I do like me some beat-'em-ups~ This one's no exception... mostly.

High points:
-The combat does feel fun and there's always satisfaction from beating up hordes of enemies with good button-presses~
-Apparently someone loves the Mana series as well as Monster Tale on DS, as pretty much every enemy is from those games~ I'm highly amused by this~

Tripping points:
-It is incredibly easy to get air-juggled by enemies if you let them pile on you. That wouldn't be a problem, normally, but this juggling can lead to your demise since you have no mercy invincibility in the air. On the one hand, yeah, it's a beat-'em-up engine, but on the other, most beat-'em-ups don't exactly allow that to happen. Instead, it's on-land strings that keep you rooted to the floor until the designated finishing point.
-The third stage is... well, I don't want to say completely boring, but what else can you call a stage that takes twice as long as the others put together and can be cleared hitless by using attack 4 after brief half-second wait periods? On the one hand, I understand that the stamina system is meant to encourage you to not just mash the buttons, but it can be really easy to manipulate. Case in point, stage 3, which has a cool concept that reminds me of the motorcycle/jetski sections in Streets of Rage Remake, but it's... uninteresting. Yeah, there are enemies constantly swarming you, but if all you need to do is spam laser cheerios on a stagger, the challenge suddenly disappears, and drastically. I almost completely tuned out of the game from the monotony somewhere after I hit a 3000 hit chain and quit after I hit 4355... and it was still going. How long does a storyteller have to endure his own insanity(oh wait, now I get the music selection. Sadly not defeating insanity today~ lol)before the not-turbo tunnel ends?! This stage overstays its welcome and should be so much shorter or more interesting! I mean, SORR's motorcycle sections had knife-and-barrel-throwing goons and molotovs in between fighting mooks, and its jetski sections still had moments of dodging obstacles to keep it engaging and fun. This stage needs some way to liven it up.
-Also, there's no way to heal? Well, I mean, technically there also aren't lives, that I can tell, but even so, it's a really weird thing playing a beat-'em-up without mysterious telephone booth chicken or gauze rolls or, heck, cherry-flavored cheesecake rolls topped with chocolate and mint leaves(no, I'm not hungry. Yes, this is a stretch, but I'm making a point) to pick up to ensure I'm prepared for what's ahead.

General aside: you mentioned "a game based on the Super Mario RPG, but using Klonoa", but I kind of got more "Klonoa, but he fights like he's Megaman's Zero instead of grabbing enemies". No matter which Mario RPG I look at, I see no similarity. Same for the Ginjirou part of the combat system, where I definitely see the DMC and, strangely enough, the Kirby(The attack 1 string feels a bit like the fighter ability and the moving attack kinda functions a bit like the top ability with how it can pierce through foes).
Read more…

This game was advertised as being Super Mario RPG with Klonoa. This is not it. This is a beat-em-up, and that's it. The game's title isn't even Klonoa: Dream Trigger in-game, it's titled Sega Brawlers Megamix, and there's a big character select screen that only shows characters from Genesis games. The gameplay itself is enjoyable, but it's not fitting for Klonoa. I feel like the description was a false advertisement.
You must log in or register to reply here.