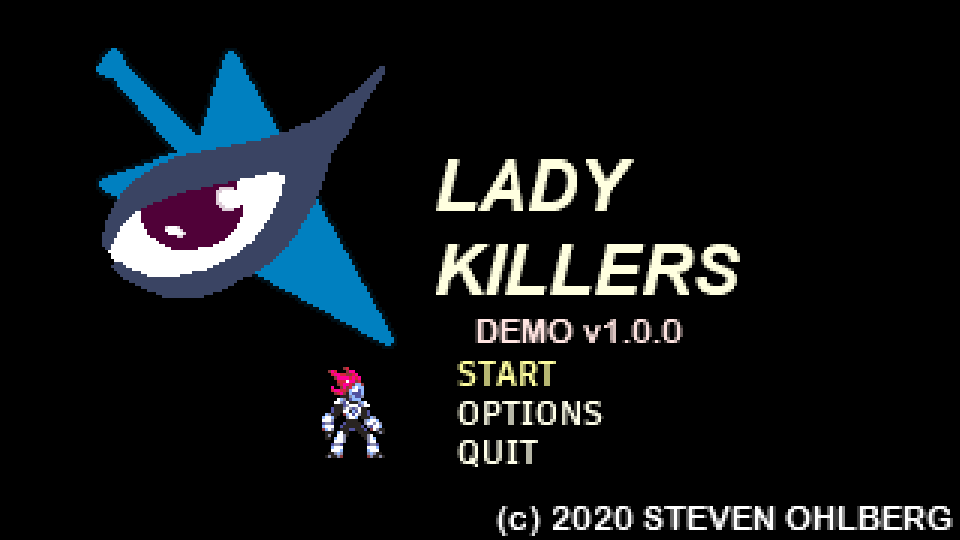 1.0.2 Update! Check notes at the bottom for changes.

DEMO 1.0.0 is FINALLY available! Play to your heart's content (and please tell your friends!) Let me know any feedback or bugs you find here, via email, or on twitter. I've also attached alternate exe's for Fullscreen/Windows options if you need them.

Important tip: To get out of the first hole you have to Backflip (Up + Jump while Standing) up to the Corner Ledge to Grab it, then hold Up to Climb out of the hole. If the Moth enemy shows up before you get out, open one of the Capsules, grab the Kunai, and Throw them Up at it to kill it.

(I'd like to build a Tutorial to explain alot of these concepts that are tested all together in just that first pit, but for now that's how you get out of that hole. The rest of the level should be easy enough to figure out after that.)

Hello! My name is Steven Ohlberg, or JackelZXA online. This is my game, Lady Killers!

In it you play as a futuristic ninja girl named Ashe who joins a female mercenary group called Lady Killers. In this game you'll be fighting robots, monsters, and other PMC groups as you progress through missions and fight powerful enemies.
(In the full game you'll to be able to purchase new gear and weapons for your next assignment based on your performance in missions.) 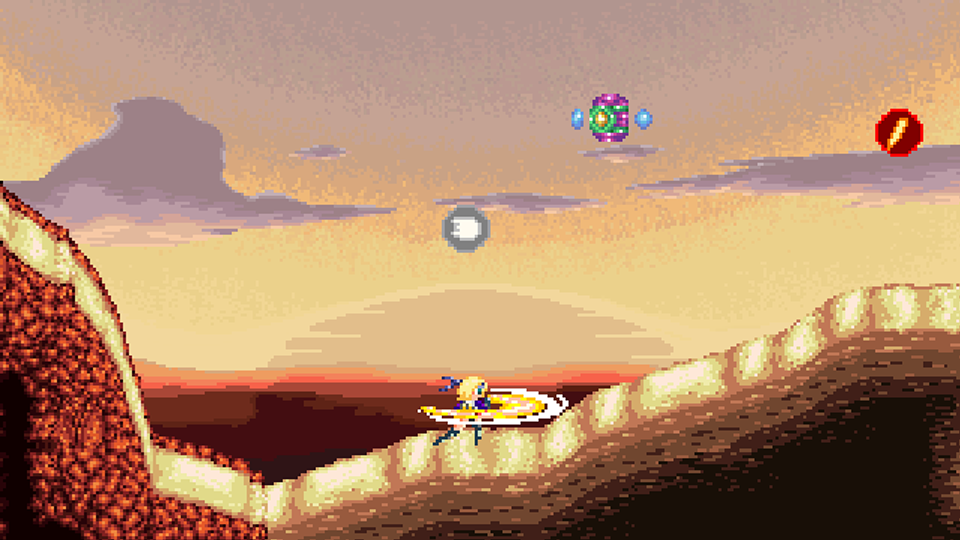 - Wall Jump (Press A BUTTON when near a Wall. Less Effective when not equipped with your Armor.)
- Wall Grab (Press LEFT/RIGHT against a Wall in midair to grab it. You can Climb Ledges or Cling to Walls by holding UP on the D-Pad.)
- Back Flip (Hold UP and Press A BUTTON while on the ground to Jump higher than normal.)
- Air Roll (Hold DOWN in the air, modifies jumps and performs attacks with certain weapons.)
- Air Dash (Press A BUTTON while in the air to dash forward using your Armor. Cannot be performed after a Wall Jump.)

- Hover (Hold LB BUMPER while in the air to use your Armor and hover in place.)
- Guard (Hold LT/RT TRIGGER to guard most attacks from ahead of you. Some attacks are altered when Guarding.)
- Slide (Hold DOWN while running to slide for a short distance on your knees, hold forward to slide longer.)
- Slide Dash (Hold DOWN and press LB BUMPER to quickly dash under low spaces using your Armor.)
- Pose (Press the BACK BUTTON to pose.) 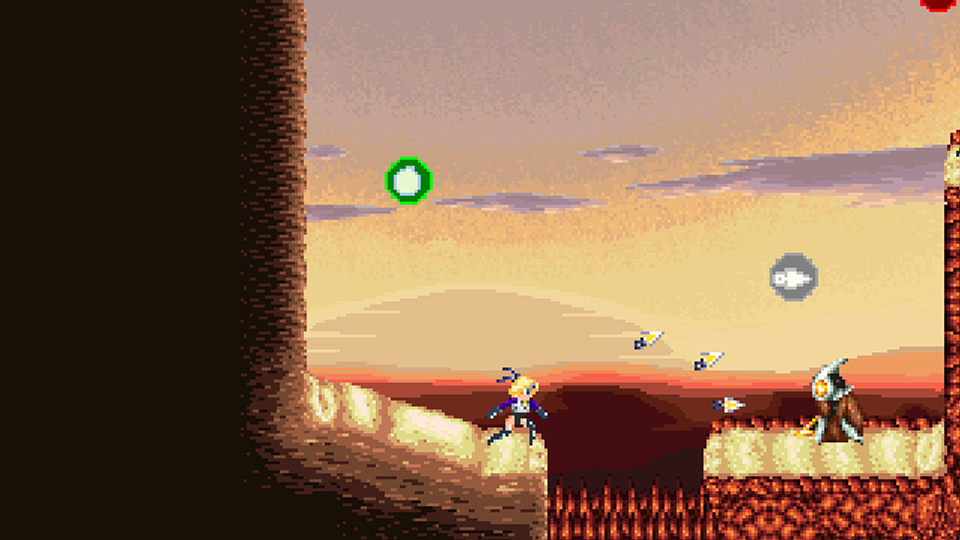 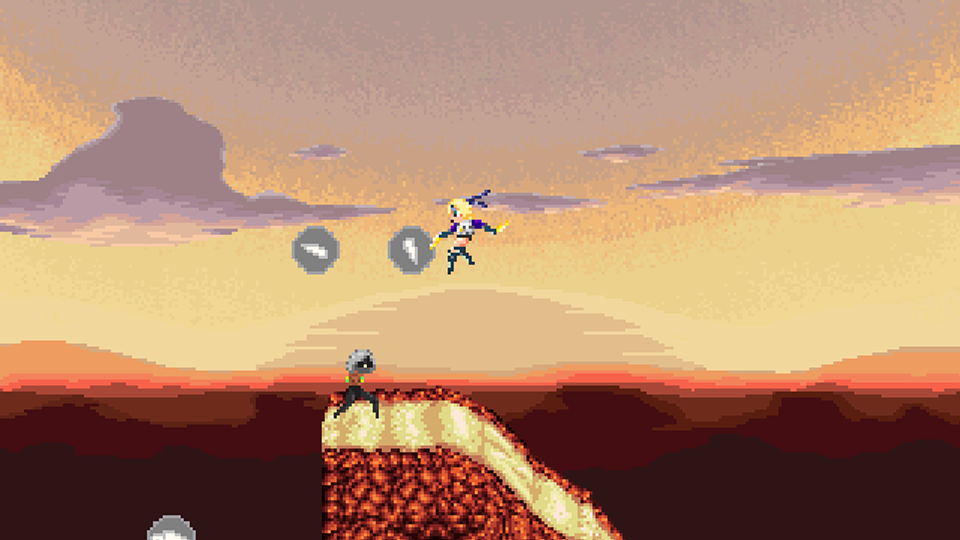 You can find several weapons in levels from floating Pods scattered around. Some have fixed contents, while others have randomized drops to vary up repeat playthroughs. Weapons range from limited throwable Sub-Weapons, Pistols, and Melee Weapons (Swords, Daggers, Spear, Staff) that have different attacks and change your handling based on what combinations you have equipped! If you hit directly with the full blade you'll see a full star shaped hit effect and deal DOUBLE DAMAGE for that attack! (Every spark is a bit of damage done!)


You start out Unarmed, only able to attack with your Gloves and Boots, but you can easily find Daggers which upgrade your attack range and speed. Swords are more powerful and give you more specialized moves depending on if they're in your Main or Off Hand. They also can allow you to attack while Back-Flipping or Rolling.

The Spear can only be used in your Main Hand but it has the highest range, while being the slowest weapon. It also has an Overhead Attack you can use while Guarding and also allows you to perform a Rolling Attack. It pairs well with an Off-Hand Sword. The Staff functions as an alternative that can rapidly perform a Sweep move instead of being able to Stab. 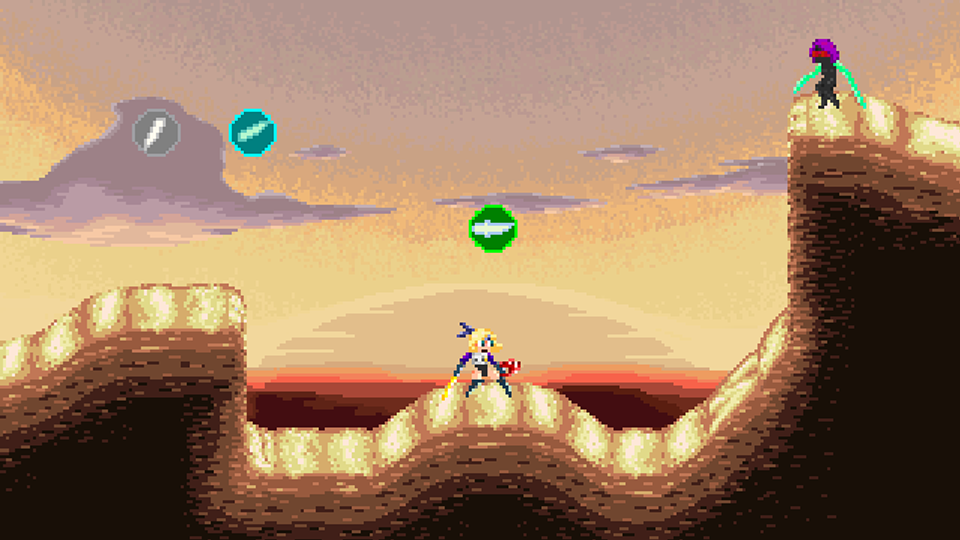 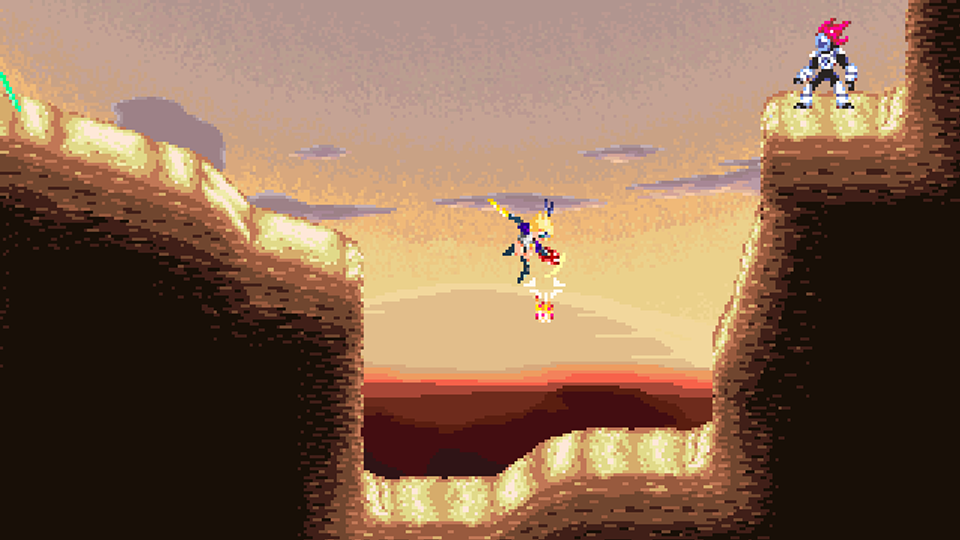 Throwable Sub-Weapons have a limited supply of ammo but are very useful. Each projectiles can individually hit, so while they're good for attacking from range, you can deal the most damage if you can land multiple hits at once!

Your Sub-Weapons include Throwing Knives, Kunai, Ninja Stars, and Bombs. You can only equip one Sub Weapon at a time, but activating the same orb again will refill your Ammo!

Pistols are extremely powerful ranged weapons take both your Off-Hand Weapon Slot and your Sub-Weapons Slot to equip! You can fire with either attack button based on what you find most comfortable, however. Keep in mind that you are unable to Roll in the Air while equipped with a Pistol. 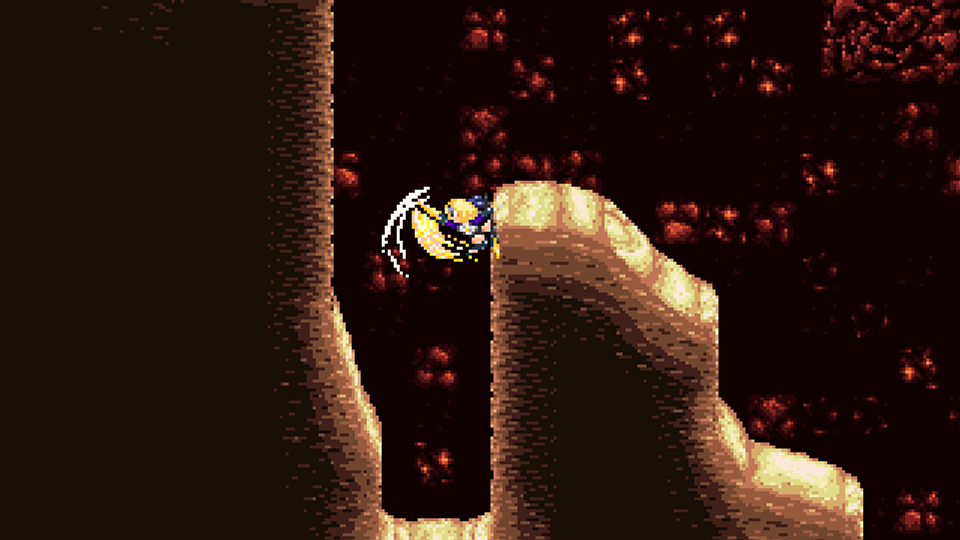 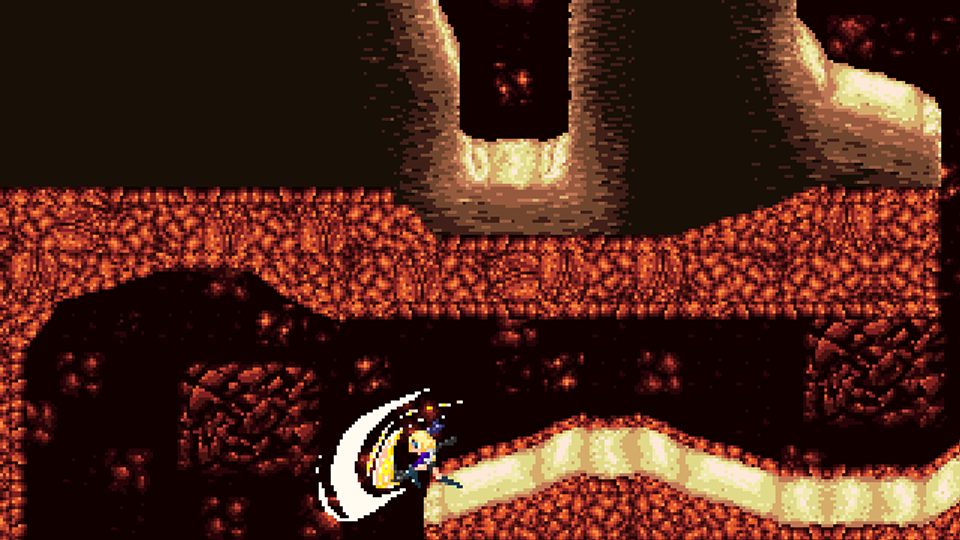 From the Options Menu you can rebind Gamepad Controls or Customize Ashe's Appearance! You can set Hair Color, Head Equipment, Body Armor, Gloves, Boots, and Skin Tone! This ranges from Bandanas, Eyewear, Metal Arms, and Armors that effect your abilities. NOTE: If you equip an Outfit without Armor Equipped you will not be able to perform Wall Jumps to finish the Demo. In the finished game Ashe's equipment will change her stats and add additional modifiers to gameplay. 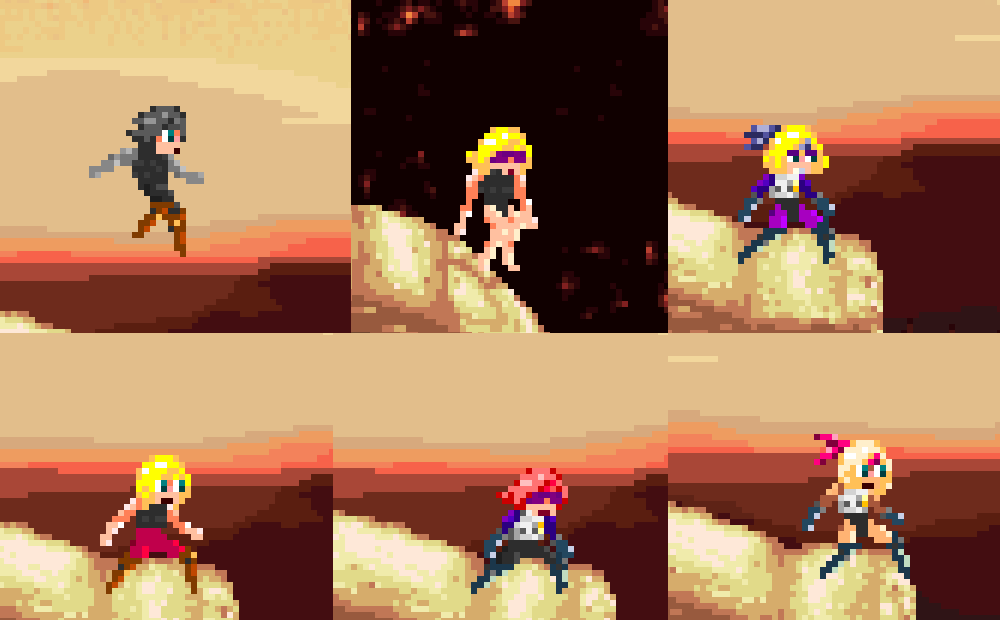 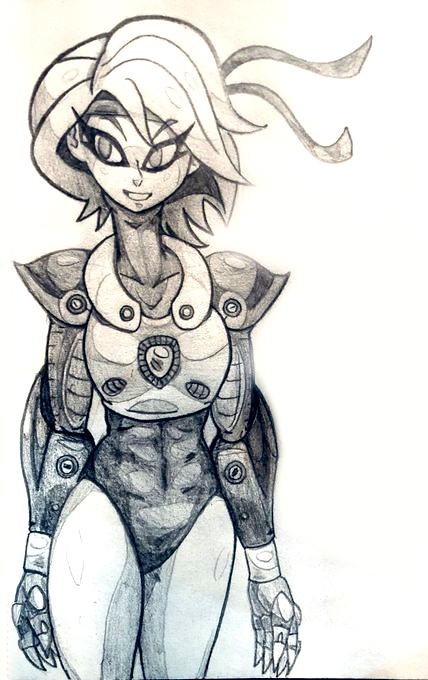 1.0.0 DEMO IS AVAILABLE! Everything is functional in this release!

Updated to 1.0.1! Tutorial information has been added to help players understand the controls. (I'd like to get a tutorial stage done at some point) I also modified when the first Moth bomber shows up so players can figure out the ledge climbing mechanic without being attacked.

1.0.2 Updates: XBox controller issues should be fixed now. Levels have had an optimization pass applied to hopefully increase speed on lower end machines. Capsules have also been modified in this build.

Art & Animation, Designs, Sound Effects, and Programming are all done by me, Steven Ohlberg!

Music is not done by me and is:
Title Music: Drums and Riffs (Half-Life)
Stage Music: Terran Three (Starcraft)

This one's just a bit too early to comment on. There aren't a lot of mechanics at play here, in general. The pixel art is cool, though, and the post-apocalyptic setting is pretty rad.

WhiskerMidi said:
This one's just a bit too early to comment on. There aren't a lot of mechanics at play here, in general. The pixel art is cool, though, and the post-apocalyptic setting is pretty rad.
Click to expand...

I've just finished my ver 1.0.0 Demo Update. It is now fully functional and completable. It'd be great if you gave it another shot and let me know what you think of the finished Demo! :D

JackelZXA said:
I've just finished my ver 1.0.0 Demo Update. It is now fully functional and completable. It'd be great if you gave it another shot and let me know what you think of the finished Demo! :D
Click to expand...

I'll check it out!
You must log in or register to reply here.