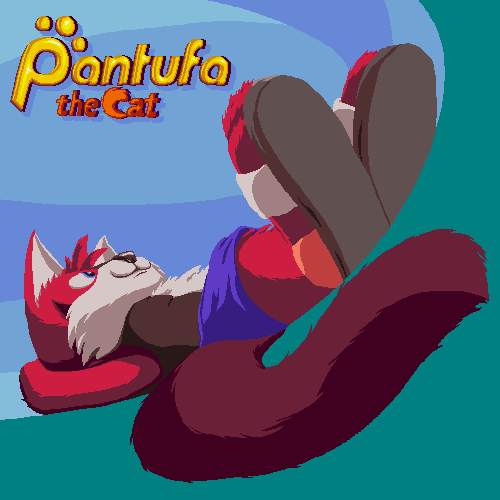 *IMPORTANT*
CHECK HERE FOR UPDATES ON THE PROJECT, THIS DEMO IS OUTDATED
*/IMPORTANT*

WARNING: Due to some weird glitch somewhere that I can't for the life of me figure out, there is a small chance this hack slowly corrupts itself on real Hardware. If anyone has any idea what's going on here or happens to have simillar issues on emulators, let me know. I haven't had any reports of this happening on anyone else's machine so it should be pretty safe.

In the Yo-world, a catastrophe had bestowed upon the lands. An unknown object hit the Ulteye Star, causing it to flood the world with the liquid known as Star Tear, which is about the same as ocean water but much more saltier and with a hint of melon. To prevent further damage, pipes were built everywhere to keep the liquids away. This event ultimately lead to a shortage of crops, including tomatoes which are one of the most important ingredients for making a Francesinha, Pantufa's favourite dish.

It is the red cat's task to stop the Star from crying and to prevent it from happening again to ensure Francesinhas are possible in the future.

There are rumours about this ancient artefact known as the Plot Bullshit Bell that is known to prevent anything from crying with its chime, perhaps this item will aid the red cat on its journey.

Play through a two Level Demo of what the project has to offer.

Relive 2011 through these rehashed stages from the original Pantufa the Cat, with minor slice of life alterations such as bug fixes (except for the fun ones).
The entire campaign is playable, albeit bonus stages were cut (granted they only gave you lives and continues which are pretty much nonexistent here).

Returning from the SHC 2017 are the DX levels, previously only accessible through the Dev Menu. Beating this mode unlocks the Dev Menu.

Youtube Playthrough that doesn't use the "High Quality PSG" option, from the SHC2016 version.

SHC 2017: Repurposed entire project for a Sonic After the Sequel DX joke under the name "Classic Pantufa the Cat DX".

SHC 2020: Added one stage and fixed up some of the Classic levels, along with the addition of Classic DX

Special Thanks​
Did a great set of 8x8 sized letters
Changed "Artist code" into code
inflate.asm (yes, this hack uses zip compression)
Minimal code help related to the pause screen
Minimal music help at one time
Helped by making some amazing custom tools
Has a Monopoly on Sonic hacking tools for some reason
Fixed some sprites to look pretty
The Shandon behind the Shandon Hill (majority of the tiles)
Cameos!
Made the lovely Logo
People who never gave up on me

I never got the chance to try this rom hack out until today and WOW this is really awesome!! Short, but very very sweet! It worked on the emulator I used just fine. I would have no idea where to even start when it comes to making something like this, bravo!
You must log in or register to reply here.