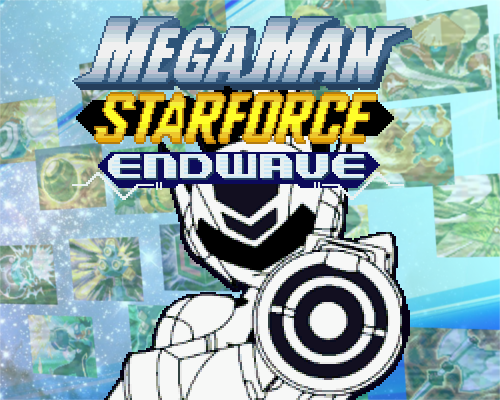 Take control of the human Geo Stelar and the alien Omega-Xis as they fuse together to become the interstellar warrior known as MegaMan!
Use a wide variety of specialized attacks, called Battle Cards, to take down powerful opponents in this fast-paced, grid-based action RPG!

This is a Mega Man fan game, based on the Star Force and Battle Network spin-off series. Mega Man is owned by Capcom.
This is a demo. Everything you see here is subject to change.

Get the full OST for the game by downloading the zip on the right! -->

This game is based off of what was unofficially revealed of the cancelled Mega Man Star Force 4.
In this game, Geo is teamed up with a genius outlaw hacker named Kazuma, and together they must perform several operations in order to avoid capture from the elite police force, known as the Satella Police.

One of this game's unique features is the ability to automatically adjust itself to the player's skill level! This way, both novices and hardcore fans of the series can have a fun time and fight challenging but beatable enemies.

Okay, all my yes! Seriously, Starforce is so underappreciated; seeing a competent fan-project, like this one, crop up makes me so happy~
High points:
-The only bits of dialogue we get work well to emulate the original series' writing style, including the joke stuffs(btw, hate you eternally for the dance joke. y tho.)
-The three main encounters do well to emulate the original battle style as well, though I did notice a few things were changed: for one, the field is set up like Battle Network more than Starforce, but it has been tweaked to allow for lock-on and the like, which is welcome. It plays well, at bare minimum, and it's fun~
-Scaling difficulty based on how you play is such a cool idea! Go without getting hit too long, and suddenly enemies start to fight harder; get railed too often and they'll slam on the brakes a bit to give you a fighting chance. In practice, it actually doesn't feel as hand-hold-y and coddling as I thought it would, and if anything, it feels natural. I can see applications where certain viruses or bosses will change their attacks/properties or even gain new attacks depending on your active rank.

Tripping Points:
-While I can get used to it, and have, I don't particularly like the fact that it's modeled after Battle Network for the sole reason of how much it absolutely FIGHTS against my ingrained muscle memory. No block function(probably a feature yet to be implemented?), two less Battle Cards per turn usable at a time, moving up and down as opposed to left and right....
-...and the Mega Attack is automatic for melee-based cards, which can kind of mess with the timing for sword and widesword counter hits on enemies that actually get close to you. I feel like it should remain as a trigger, as it was before. I mean, it's not like we're using left and right in battle, are we?
-Also, it's not particularly obvious that you have to shoot through the bomb line during the secret encounter. My first instinct was to block, honestly, BUT OH WAIT Kazuma accidentally the gorram button!

Oh, and yes, there's a secret fourth fight. Find it yourself and enjoy it~
Reactions: Alumae
Read more…

Hey man I don't have time right now to write a proper review but I agree pretty much with the review already posted. I am a huge fan of Star Force and I loved this. Had a hard time playing in 2d since the only time I played Battle Network was when I was a teeny winy tiny kid but it worked out fine, this is a great project.
You must log in or register to reply here.