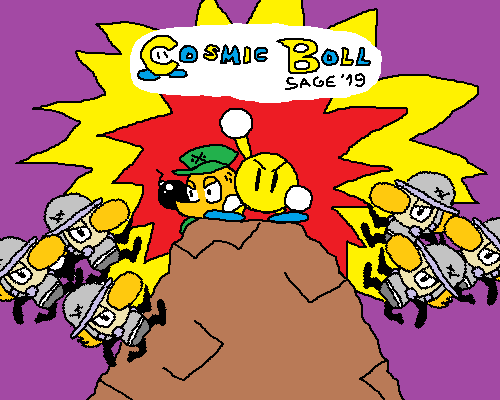 Cosmic Boll is a beat 'em up platformer largely based on Dragon Ball Advance Adventure, Astro Boy Omega Factor and the One Piece and Tiny Toon brawlers related to those two, among other GBA action games.
As Bolinha the marblobo, tear through an invasion of ducks with merciless punching and extreme rolling actions.

The demo contains a polished Stage 1-1 from last year and half of 1-2. Both are designed to be 4-6 minutes long, with potential for 2-3 minute runs if one figures out the controls in detail. The demo also begins with a brief tutorial to explain the basics. 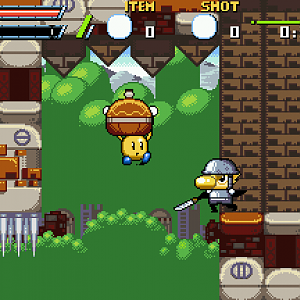 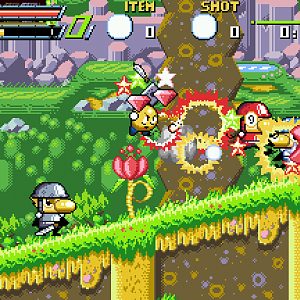 How to play the game:
Just punch enemies to destroy them all and use rolling to get around quickly. The rest is fluff, tbh.

How to play the game, in more detail. Or, "look how many bogus mechanics I crammed into a beat 'em up with just three action buttons":
-Tap foward while rolling for a tame boost.
-Roll from a dive kick for a mild boost.
-Roll from a ground dash for a spicy boost.
-Equip a comet orb for extra running speed.
-Blocking or rolling right before you take damage will parry it, stunning enemies, reflecting projectiles, boosting attack power AND granting invincibility frames all at the same time. How exploitable!
-The air dash is invincible, but doesn't deal damage without a comet orb equipped.
-Use air moves, special moves and the combo ender for crowd control. You should notice some of those methods barely deal any damage, though (but from gameplay videos everyone just keeps boringly spamming the default Sonic Boom special anyway).
-Red/pink enemies won't flinch from attacks. Wow, you can't just flail about like a doofus against them! And since I'm going by Astro Boy: Omega Factor rules, they also deal double damage.
-But if a fire orb is equipped, Bolinha won't flinch or lose Super stocks from damage while attacking either...
-Got hit? Press jump to cancel the knockback and hold down to block and heal some of the damage. the ice orb improves how much health you can recover.
-If your guard is broken you take double damage AND the stamina gauge enters negative values. Watch out.
-Bolinha won't be knocked out unless he takes damage at zero HP.
-Equipping an electric orb raises invincibility frames after taking a hit. Picking most items also triggers invincibility, so it might interest you to exploit that if a defeated enemy drops any.
-Power orbs explode when stomped on, damaging nearby enemies and granting temporary effects to Bolinha. 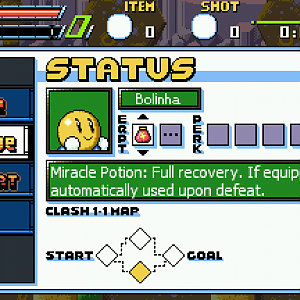 -The equipment menu is very much a WIP but there's some stuff available in the demo. A potion and a item for extra speed, for example. The last two "perk" icons can be unlocked in the demo, via sooome kinda method...
-Maybe if I make the guide illustrated people will actually check it out.
-And maybe I should be really, REALLY explicit in-game about how the mechanics work to begin with.
-For every two enemy encounters you get a in-area checkpoint.
-Wall-bouncing while rolling results in a stronger, continous bounce.
-Bolinha gets a power boost at zero HP. This effect can improve if you defeat enough enemies in such a state.
-You're supposed to hit those targets in the tutorial, you know???
-Stop pushing blocks. Air dash into them instead, or stomp on them/next to them like it's Kirby and the Amazing Mirror. Believe it or not, this is about the only mechanic I've intentionally lifted from good old Kirby.
-Try rolling over a flame you just tossed.
-Fire can burn the bridges in Clash 1-1. Even without fire attacks, you can parry the flame-thrower bots to create a flame in a couple spots.
​

By @TheTwosdayCoder
Developed in Clickteam Fusion 2.5, with Sonic Worlds Delta and Simple Sonic Worlds.
Placeholder music used in the game is from Konami's Power Pros/Power Pro-kun Pocket series (mainly the latter).
Greetings to Feon2 who gave Bolinha the "Boll" nickname back in 2007 or so, and to other people from Gaming Brasil too.
Apologies for taking so long to reskin the robot dummy from Simple Sonic Worlds (which is a recolor of a Spark The Electric Jester enemy).
Reactions: juney2008
Share:
Reddit Pinterest Tumblr WhatsApp Email Link

Bolinha nervosa ;) Congratulations for the project. Great concept, I like the creativity of it all
Reactions: Hyper Emerson

Hyper Emerson
Thanks, @lex! It was great to play Open Surge this SAGE too!
Really cool, this game just keeps getting better and better. :)
Reactions: Hyper Emerson

Hyper Emerson
That's too kind given how little significant stuff I've had the chance to build since last year...
Thanks.
I love how this game blends genres -platformer, beat'em up, and puzzle -seamlessly, too I might add.
Reactions: Hyper Emerson
Read more…