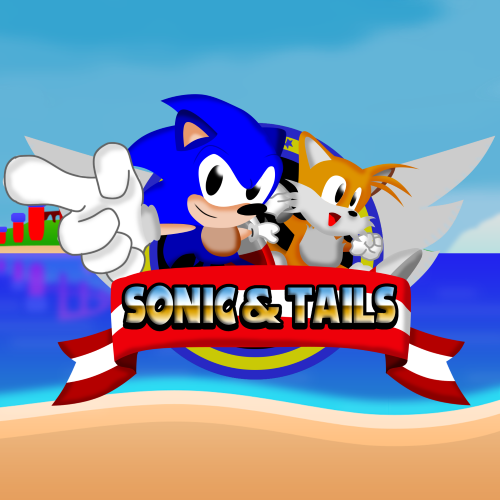 Sonic & Tails is a fan made Sonic the Hedgehog game that is set on Northern Island. Dr. "Eggman" Robotnik has created a doomsday device which is set to go off soon. Sonic and Tails set out to collect the seven Chaos Emeralds before Robotnik unleashes mass destruction onto the entire planet and stop him.

The game is planned to include the following 4 zones, Cyan Coast Zone being playable in this year's demo.
Prismatic Prologue Zone, Cyan Coast Zone, Twinkle Twilight Zone and Final Fever Zone.
Experiment with shields as we not only gave you 2 new shields, Ground and Air, to play with, but also expanded the moveset of the 3 traditional elemental shields, adding up to 5 elemental and 1 plain shields in the game.

We also have a website, check it out for further information on the game, including its characters, stages and backstory!

Controls:
A/Z - Jump
X - Shield abilities (both in-air and on-ground)
Arrow Keys - Move (In game)/Select (In the set-up).
Enter - Pause (In game)/Confirm (In the set-up)
F2 - Reset the game
F4 - Full Screen at will (as opposed to the initial set-up)
Different controllers are supported, with Z mapped to A (XBOne) or Cross (PS4), X mapped to B (XBOne) or Circle (PS4) and arrow keys mapped to the left analogue stick (both).

A set of 9 screenshots, showing off the game's various acts, title screen and more to come.

This is a classic-themed Sonic the Hedgehog fan game that has been in development for 3 years or more, under the joint cooperation of programmer and YouTuber Bluecore (not to be confused with Blue Core Studios, the makers of that fan film) and long time successless artist MrLevRocks.
In this year's SAGE demo we focussed on getting as much content out as we could, as we prepared 3 acts of one Zone for you to breeze through. Focussed on familiarity over originality, we tried to make a short, yet enjoyable, experience using the classic Sonic formula that helped the blue blur take the world by storm in the early 90s. Additionally, feedback has been taken into consideration and some things, including art, graphical effects and music have been added, changed or taken away as compared to the 2016 SAGE demo of the same game.
We hope you will enjoy the demo and, with your positive feedback, will be able to complete and perfect the game by next SAGE!

the game is good,have good musics and grahfics
but the game its super fast and have soo much ''walk to right''
I had a blast playing it. It had character, some new badniks, a cute butterfly following you around, good music, and enjoyable levels. Don't get me wrong when I say this, but it definitely feels like a fan game and not like an original SEGA game, it reminded me a lot of Sonic Axiom at times with the rings in arrow shapes. I wasn't necessarily a fan of the custom shield(s?) though.
I used an Xbox One controller and the D-pad didn't work, I needed to use the analog stick, but it was fine. Might be worth looking into.
I think the tile sprites need some work, the grass looks a bit too simple and you need some fills to break the pattern in the blocks, similarly to how Green Hill, Palmtree Panic or Mushroom Hill would do it. But you can try other things as well like other levels would do. I liked the burnt palette change in the end of Act 3, it worked well.
Read more…

is this a origanal game

SonicManiaFan22 said:
is this a origanal game
Click to expand...

Yes
Everyone is hyped for Sonic Chaos, but I have to say I liked this demo just as much if not a little more. It has the same things going as that game does. If you guys keep using your creativity and honesty this game will be great in the end. "Remember, kids, love with your heart, use your head for everything else" ;)
Hi Congratulatios for the game, it´s wonderfoul. The game aways gives error in part 3 of the first phase, always in the same place. Is there anything I can do?

Luis Antonio said:
Hi Congratulatios for the game, it´s wonderfoul. The game aways gives error in part 3 of the first phase, always in the same place. Is there anything I can do?
Click to expand...

Odd terminology you're using, but I think I know what you mean.

If I understand you correctly, you have an error at the third act of this 1 zone demo? If so, get me a screenshot or copy-paste the error message GM spits at you, because I can't think of any known bugs that cause the game to crash at that moment in particular.
Almost feels like the first part of a legitimate Sonic game. I really like it for the most part, though I have a slight issue with the few steep walls that you have to run up. Luckily we have the peel out to get up them, but I feel like they don't fit well. Hitting those made me think of Sonic Forces and its Double Boost moments where it seems like they should be cool moments, but they're misplaced or used too often so they lose impact and end up with the opposite effect that they should have. Other than those though, this really nails the feel of a Sonic game and I'd love to see more.

Excuse me, where could I find this game's music? It's awesome.
You must log in or register to reply here.