Overview Reviews (10)
Excellent animations, beautiful colors, movement that feels just as good as mania, and all the playable characters are excellent additions. I feel that f more levels are added, they need a bit more verticality and also the bosses are a bit too easy. However, this game is extremely fun and looks great.
B
bennimarru
I agree! I can't wait until there's more than just the first level!
This will be my first review of a Sonic fangame.

I played this game after SAGE 2020 and gotta say I am in love with this game due to its art style, gameplay, and new additions of characters that honestly fit in the Sega Saturn game.

Gameplay:
The gameplay is simple yet straightforward for the beginner's level, as it utilizes some of the character's ability, unique enemies (i.e. the enemy that shatters the bridge), and multiple pathways. The new gimmick no one talks about is the vine that moves a character in a slingshot matter. The mid-boss and Eggman boss are actually challenging but not too hard, with the Eggman being one of the most interesting bosses I saw and it's simple (though I think it kinda hard for new players). My only complaint to me is the Combi Ring which didn't show the strange blue ring for some reason.

Characters:
Fang the Sniper: Fang is a pretty nice addition to the team, not having been playable since Sonic the Fighters (though I never played that game either). His ability is to use a pistol that not only double jumps when pressing the Jump twice but also damages enemies which I was intriguing with. Overall, pretty fun character with some funny end clear animation.

Tunnel the Mole: This new character from the roster is actually pretty fun to use and broken (even though I never saw how broken it was). What I mean is his ability to cling on top of any block as long as it is nearby and he can simply dash when unsling which is a very unique thing since no other character can do that. Though this character was a bit struggle for me, it was definitely fun to visit this character.

Presentation:
Overall, the art style is what you expected from a fangame, and it's pretty neat how it represents the Sega Saturn graphics (such as Sonic appearance in Sonic 3D Blast). I also like the new character designs (particularly Tails' idle animations), it fits pretty well with the aesthetics and the zone itself.
The title screen is so clean like Sonic Mania and the main menu is such beautiful though I wish that the Options menu is open (but it's a fangame so).
The music is just better in this game and it's like a combination of Sonic Mania and CD at its best, and my favorite soundtrack from this game is Midnight (Trailer theme) and Tropicano (Verdant Isle Zone Act 2).

Conclusion:
Overall, this is the game that I was not hyped for when I became a Sonic fangame but this game is beautiful, it plays well, and I was surprised that it was developed over 3 years ago. So naturally, this game has great additional characters and soundtrack that I was very happy to come back after SAGE. I give this one 9.6 / 10 for me.
Last edited: Mar 1, 2021
Reactions: Nascar01 and Kevin CM
I Love playing Sonic galactic especialy Sonic,Fang and Tunel i hope next demo comes soon.

moh120
simply sonic mania 2
The games amazing, it's super fun to play. The first level is clearly a tutorial level and does a great job showing you how to play. I encountered one glitch, though. When using Fang's pop gun, you can hit broken monitors forever, thus giving infinite rings and lives.
The game is excellent! very well done, but what is the song that plays in the credits?

Lilac
Viewpoint Credits Theme: Mes Volutes Bleus
It's perfect, the level design, sprites, bosses, enemys, it's perfect. Can someone please give me the sprites to the game, I want to make some emojis for a Discord server.
Reactions: LuxMax92 and jocheaa
I just finished playing both acts with all the characters. And I must say, I can't wait to see the full game. The graphics are excellent, the level design and music are very good too. I actually didn't expect to see the Drop Dash, but I really like it, and I love the gameplay of Fang and Tunnel, it's very original and very well implemented. You guys are doing an excellent job, keep it up!
Reactions: Lilac
E
Eugegames234
Alguien que me diga dónde está el enlace del juego
I love this game! It's the true Sonic 4 when it's complete. You may say Sonic Mania is the true Sonic 4, but this game follows the triagly's tradition of a new character. They are both god tier though.
Review: I love this game I love playing as Tunnel. He has shortcuts that make you feel like speedrunner but there's no possible way I can speedrun. The 1st zone is very good in level design. The the sprites are very good. I can't wait for this to be finished.
That's it bye.
Reactions: Lilac and SEGAOtherSPZ
B
Bellenttier
Where u link download?
B
blahblahblah123
its on the right
Great game so far; good music, amazing sprite work and a warm welcoming presentation. Galactic has spot-on physics and provides us with some clear, polished level design that lets you pinball through the level with varied, geometric structures like the classics. Sonic, Tails and Knuckles all function as expected. (Quick Knuckles nitpick, the proportions on his head sprites tend to abruptly change sizes, which looks weird during gameplay) 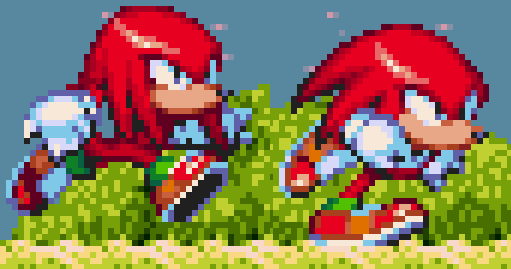 The new character Tunnel The Mole has a nice, fully realized design that keeps it simple. You can really see the 90's Sonic Team influences that don't look out of place next to the established cast.

Tunnel continues the tradition of characters having a species-specific ability tailored towards gameplay (for Sonic 1 it was Sonic curling into a ball, for Chaotix on the 32X it was Espio sticking to walls and Charmy's quick flight, and finally Mania Plus's Mighty having shell armour and Ray's glide ability), and having paths exclusive to his digging ability is a cool way to utilize him based on that criteria. The cool thing about his wall/ceiling jumps is that, in addition to being able to navigate levels in a fun new way, it's also basically Mighty's Hammer Drop but better because it PRESERVES MOMENTUM when landing on sloped terrain; It's really fun to pull off.

Fang is a cool addition as well, having his pop gun function as a chargeable double jump and an attack is a clever way to implement him into a playable role. Everything looks solid and I'm looking forward to whatever comes next.
Reactions: Alejandro Alzate and Lilac

Vix
the game doesnt work for me.when I launch it . a black window apperirs
Pls help

ModernTailsButOld
Hello!
excellent game, fun OST, GORGEOUS VISUALS OF SPRITES!
Love goes all around for this game! Bringing back fang was one thing but ORIGINAL BOSSES? unheard of and background adapting to a sunset in act 1? you guys are making sonic game mechanics unique.

adding a story and options menu is a minior gripe from me.
Quotes from my friend includes;
"only issue i have is that i have to press the stick directly down to spin dash, instead of a 45 degree angle at the bottom but thats an easy fix"
and
"a tad easy, but its the first zone"

i give a 4 star because there are some other gripes such as the mole OC kinda being hard to use for a game with speed, maybe make the mole crawl fast while digged in? also because i can't edit controls yet [but thank you so much for adding controller support i love you]
still a really good game tho don't let my criticism get you down.
Reactions: Lilac
View pervious replies…

Lilac
My interest is in making the movesets a One-Off deal that doesn't force momentum being cut out, or doesn't get complicated. It's also to be only useful as a move to use in air. This is modeled after what style is adapted for the classic moves. This and being able to shoot while on ground (ala SRB2) being useless in 2D is why I personally have no interest in going that direction.
S
SuperSonicDez9
Does anybody know how to play in fullscreen?
K
KrashKharma
SuperSonicDez9 I scoured the internet for an answer and couldn't find one, so I button mashed until I figured it out; it's F4. Hit F4 and it'll fullscreen.
Very fun level design, and the new characters fit in perfectly, especially Fang! Music is catchy and well composed, and the sprite work is some of the best I've seen in a fan work, and even in official works! So excited to see where this game is headed, because the framework is certainly set for this to be one of the best sonic fan games ever created. Nothing but praise from me! (Love love love the menus too)
Reactions: Lilac and Dextergethood

Lilac
Thank you! Me and the team absolutely appreciate your comments, please do look forward to more in our future!
B
Burst132
How to go fullscreen?
Top Bottom