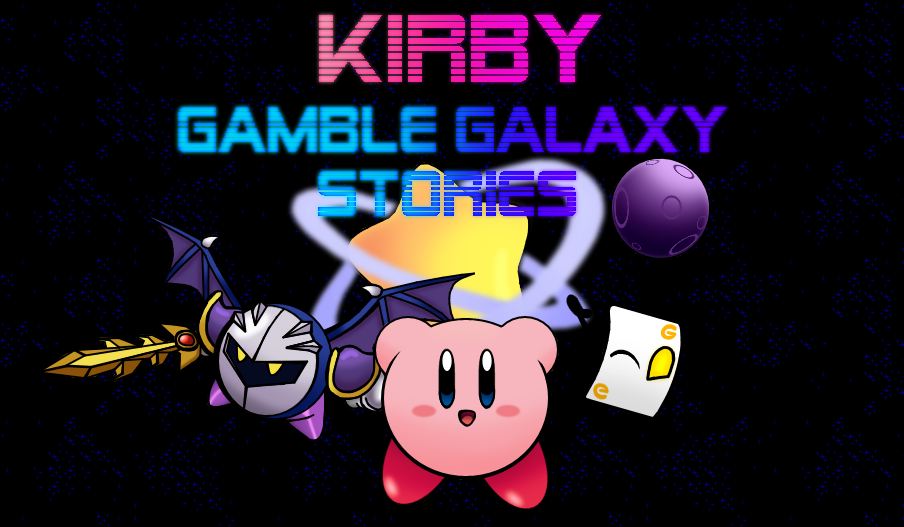 Kirby Gamble Galaxy Stories" is a fangame made by Team Gamble based on the Nintendo series "Kirby", taking inspiration from Kirby Super Star Ultra and Kirby Squeak Squad​
Story:


One peaceful day on Popstar. Dedede was up to his old tricks stealing food from the citizens of Dream Land, while a mysterious creature fell from the sky from an unknown location and ran into Kirby on his quest to return the food. The creature then told Kirby about a cosmic tyrant who's going to invade his home of Popstar. Hearing the news, Kirby stopped what he was doing and began to help the being. So with the help of Meta Knight, the three of them travel to a familiar place, Gamble Galaxy. Now it's up to Kirby and his new friend to put a stop to all this while uncovering what's really going on in this adventure.​
Extended Demo Includes:

Be sure to send us emails for game info, feedback, business etc.

Admittedly I have no experience playing Kirby Hacks or fan games, but I found your game to be fun and enjoyable. I like the level design and the music. The game play is fluid, and the controls were nice, and I say that last part as a guy who deplores using a keyboard instead of a control/gamepad.
I will admit, the first two (and partially the third) levels had me worried. But, the design gets better the deeper you go into it, with some neat ideas thrown in (mystics are a great way to avoid spriting entirely new sheets while still making engaging abilities for the player to use). The 5 health is also a neat change; it's a subtle but fair way to add difficulty rather than using the standard 6. I was having a blast by egg garden... until the boss. Please put the checkpoint in the room with the copy pedestals instead of at the actual boss itself. Fighting Magalor with abilities is a lot more fun than the standard star. Besides that gripe though, that was a really fun game once I got past Halberd, and definitely a lot more fun than your guys' previous demo. I look forward to what you guys bring in the future.
Reactions: MegaStrimp

Kirby Gamble Galaxy Stories is absolutely AMAZING. The visuals are gorgeous, the music is great, the controls are fluid, the new and old abilities are hella fun, the levels and visual changes are well-designed and interesting, the story is good and the bosses are awesome.
I honestly really enjoyed this demo! The graphics remind of Amazing Mirror and Ultra Star(My Two Most Favorite Kirby Games Of All Time) and so does the gameplay!! The story isn't too complicated(unlike most fangames nowadays) and is easy to understand! The story creates a new perspective on the Kirby universe and so does the new abilities that go with the story!! As a whole this game genuinely feels like an official Kirby game and I think it should be!!! I've played a lot of Kirby games as a kid(like all the time!!) and I strongly suggest that any Nintendo fan should play this game!! You won't and can't be disappointed with this AMAZING game!! Can't wait for your awesome future!!! -AppleGames
You must log in or register to reply here.