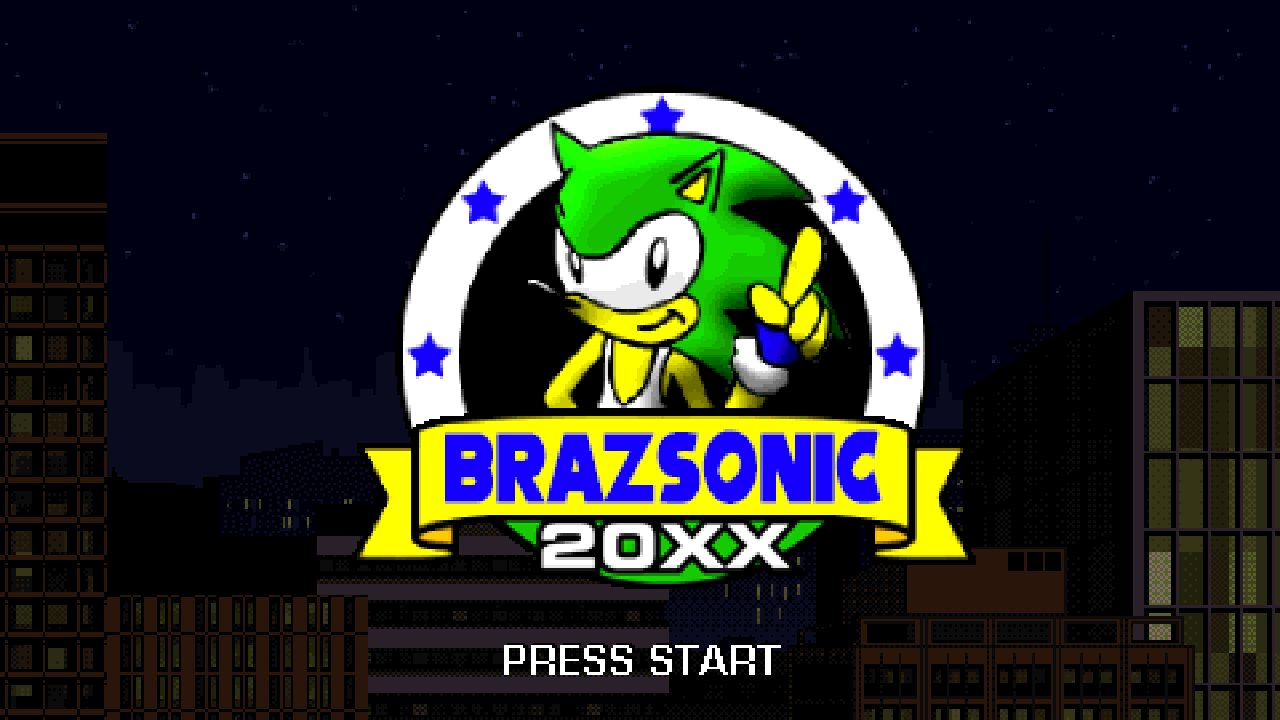 BrazSonic 20XX is an actual reboot of the BrazSonic series, with no links with any previous games. The reason for this restart is due to the fact that the BrazSonic 1 is already very outdated, and also BrazSonic 2 does not have been succeeded over the last few years.

The game is set in Brazil in the year 20XX (in some time of the 21st century), where the congressman Ivo Corruptnik, who dreams of being President of the country, seeks the Corruption Emeralds to make it true. However, his ambition implies chaos and destruction to the lands and citizens. Then the hero BrazSonic will come into the scene to stop him!

Get more knowledge about BrazSonic 20XX and the BrazSonic series on the official website (English and Portuguese):
https://brasonic.com/en/main/

To close June with something new to show, there is a new build of the Demo of BrazSonic 20XX for download, with a new game mode, more accessibility, new stage songs, more bugfixes.

Here we have a great update for the DEMO of the BrazSonic 20XX, although it will also be available for the 20th. edition of SAGE (Sonic Amateur Game Expo), an international virtual fair of Sonic fan games that take place every year, and this time, BrazSonic will not be left out, as it is here to stay!

This build was one of the hardest ones because, in addition to fixing some bugs still present, I wanted to do something different from previous builds, that would not make this just another patch with some bugs fixed.

The new main addition here is Mission Mode, something that has existed since Sonic Adventure in official games, where there are different objectives besides reaching the end of the level. Each level has a specific mission, hunting for things (coins, enemies), delivering things (I'll explain later), running away from things, and reaching the end in a different direction.

What we have so far of "missions":
Reverse direction: play the stage in the opposite direction, running to the left
Delivery Day: in the middle of the pandemic, BrazSonic, and his friends will have to work outside the home as couriers. Spend it in places and deliver the food before it gets cold, plus 5 minutes for that! To help you have an arrow to show your destination, either to deliver the business or to seek delivery; fire shield to cool less; and even speed monitors to speed you up. To disrupt, common obstacles such as traffic, enemies of the levels, and water shields that can cool the delivery! Remember, you will have 5 minutes!
Detonate all enemies: detonate all enemies on the level
Collect all coins: collect all coins in the stage
Race against Metal BrazSonic: reach the end before the metallic copy of BrazSonic
Fire escape: everything is on fire, just run!
Darkness: cross the stage through the dark, and be very careful, new and deadly dangers will be lurking.

This mode was to be completed only in the final version of the game, which will be ready later this year, but I decided to anticipate it.

We have an implementation of accessibility for mobile, where it will now be possible to configure the position and size of the buttons on the screen, something very present in mobile video game emulator applications.

I also thank everyone from the Beta Testing channel on the project discord and a few outsiders for their patience and willingness to test game updates.

Well, this build, with all these new implementations, is also the definitive one, as it will be released at SAGE 2020. And the next uploads will only be patches just to fix bugs.

- some music tracks by @sonico_cadeirante (original) and @SonicFã342 (remixed)
- new flying animations for PeloTails
- All characters are going to wear masks in the Delivery mission
- now it is possible to press the jump button in the air to type: flying, homing attack, shield ability ... this doesn’t have in the original Sonics, but I did it to give more reflex to the player (even though it’s kind of "overpower")
- Fire shield can burn the ground and hit opponents in multiplayer
- Sparks from the lightning shield can hit enemies and opponents in multiplayer
- Graffiti in the Sampa Zone
- New billboards

Bugfixes:
- Corrections to character animations
- Elemental shields more faithful to the original Sonic games
- Improved English and Spanish translations
- the character before falls off platforms with the water shield and modern Sonic stomp
- the character could move before the level started
- corrections to the title cards of the phases
- The time for dialogue with Mollynho
- Improved Iguaçu rapids
- Submerged currents from Iguaçu no longer lock the character when hit by spikes as before
- pause during special stages

Hello fellas! I have great news about the BrazSonic 20XX DEMO!
I’m releasing build 21+ (0.2.1+), with it BrazSonic 20XX will no longer be the same! And that will be very good!
Now, the game has more faithful physics to the Sonic 2D games, with smoother and realistic curves, slopes, loopings, gravity, unlike previous versions of this Demo. This is due to the GMate Engine, an open-source Sonic game engine, kind of old but still quite usable.
We have a huge list of changes and fixes:
One thing, because the project has now had a massive implementation, mainly in the physics of the characters, it is possible that there are still some bugs. I ask you to communicate me right here or on social media when you find one, okay?
See ya!

Brazsonic! This takes me back! I love this reboot, it's a really smooth experiences and I greatly enjoyed the few levels I've played so far.
hehe Sonic no Brasil
Strange and typical OC but the game is really cool, I like how it's complete with a map, settiings, cutscenes, and even the tutorial level! The levels were fun and well flowing for the most part except for the last level in the demo, some of the platforms were hard to get on sometimes and it took me 10 minutes to complete. Also, the special stage entrance and the stage itself is really cool!
thanks for game)
You must log in or register to reply here.