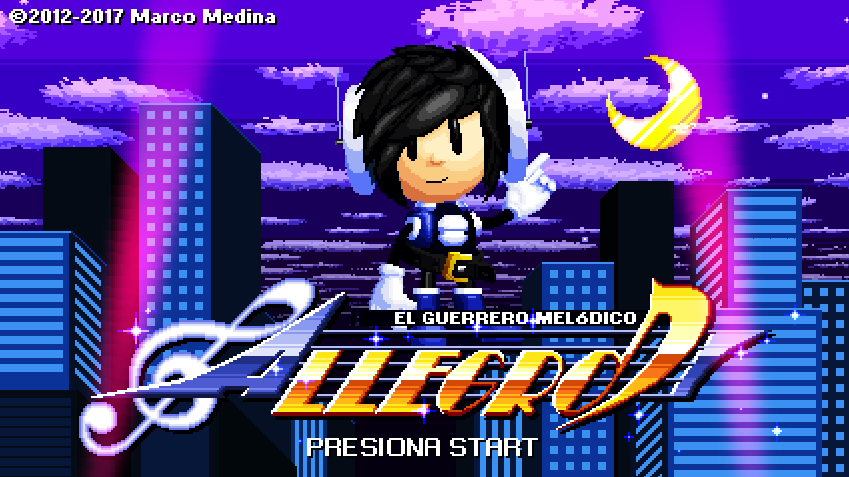 DOWNLOAD at: www.melodicwarrior.cl
SECRET BETA FOREST LEVEL: At the title screen press Up Up Up Up Up Up Up (6 Times) and then press A.
(The demo was released in November 2016, the beta forest level was revealed in later January 2017 in a promotional event).

Allegro: The melodic warrior is a fantastic retro-styled Chilean videogame, inspired by the delighting aesthetics of the 80s and 90s, characterized by their pixelated graphics. The first demo for WINDOWS was released on November 23rd, 2016. It should be noted that this demo is not complete, as there is still a lot to finish.

Meet our hero, Allegro, a mysterious melodic warrior whose origins are still unknown. His duty: to restore harmony to his precious musical world, the planet Concerto.

The planet Concerto is an extravagant world where everything is made of music, from plants, to its inhabitants, known as melodies. Many years ago, powerful evil beings decided to take the power of Concerto, causing many damages to the environment and its inhabitants, immersing them in the eternal darkness. Meanwhile, Allegro has spent millennia sleeping inside a musical box that lies in the Mystic Realm. Once freed, he does not seem to remember anything at all.


Throughout history, you will discover the mysterious past behind Allegro: The melodic warrior.

Well this is weird haha. I didn't know what to really expect, but what I got was interesting. At first I figured this would be Mega Drive-esque, but it actually feels a lot more like an Amiga/DOS game, and that was a refreshing change of pace. The sprites are all nicely styled, and serviceable. The music was also pretty good, but it got a bit stale at times. My biggest gripe with this is that it felt really weird to control. Like...really weird. Allegro moves pretty quickly, even without running, and his jump is SUPER high. But I think what threw me off the most was the Harmonic Frenzy. Using only the left and right keys alone to maneuver makes sense given the platform, but it's also pretty limiting, and given how fast you turn with it, it becomes difficult to use. The game is pretty cool conceptually (even if I still don't really know what's going on hehe), but the controls made it kind of hard to press forward. But a nice entry nonetheless.
Reactions: Mr. Beard and Marco
Read more…

reminds me of a super famicom game that i cant get off the top of my head but this game is really vibrant, sounding great, a creative idea and theres a lot of potential. however the physics could be improved a bit they feel a bit floaty
You must log in or register to reply here.