Interview with Stealth - Vertebreaker and Methyl

Article Gallery
The latest line up of games at this year's SAGE has seen an astonishing number of indie titles. Not least among them is a small demo called Vertebreaker, headed by Sonic Mania's own Stealth.
Vertebreaker shares a team with the Sonic Chaos re-imagining which we saw at last year's SAGE, with programmers Mr. Poe and TheStoneBanana, artist A+Start and musician Michael Staple, along with a few others such as Rick Danto contributing art and game design. I had a meeting with Stealth to get some insight about Vertebreaker and its inception, and Methyl, the new game engine it employs.

Plenty of people have heard the name Headcannon thrown around. It's been your studio name which was inherited by your custom game engine, also known as HCGE. This itself replaced an even older predecessor known as E02.
It seems as if this was a step towards the wider world of indie game development. About when would you say that began, and did you have any goals in mind?
Click to expand...

I registered Headcannon around November 2011 during preparation for getting into the mobile Sonic 1 port. HCGE is actually just a rebranding of E02, which I think happened when I released the Sonic example game right at the end of 2013, which would be the first time I had published anything with it since starting Headcannon. So, my most immediate concern when I started the company was to have a legal entity with which to work with Sega, but I did want to carry it forward as a brand after that.
I had wanted to get into game development full-time before that and make a career of it. After the mobile versions of Sonic 1 and 2 were finished, I tried to get some more exposure with HCGE, part of that being the updated Sonic example. With little-to-no interest, I put out a call in 2014 to form a team as part of "Project HC", where through creating a full game of some kind, I'd train some users and get the ball rolling, possibly build a development team to work with.
Click to expand...

It was shortly after then which Vertebreaker was first conceptualized with a small team, wasn't it? How did the idea come about?
Click to expand...

Most of my visibility was in the Sonic fan community, so when I put out the call, I offered two choices - either we'd go with a Sonic fan game for simplicity, or they could pitch some new ideas. When Rick responded, he had a concept that he had been holding onto for a few years about a Castlevania-like horror game with a Skeleton protagonist. We discussed it within the group and eventually came up with a direction that we agreed on. Originally, we tried to maintain a small scope since it was a learning experience, but I think we all wanted a little too much out of it for it to work at the time.
Click to expand...

So this lead to it being shelved for a good while. I would imagine your work starting on Sonic Mania also kept you busy after that.
Click to expand...

There was that and the attempted Sonic 3 remake, yeah. I wasn't able to work directly with the ProjectHC team on a full-time basis so we sort of collapsed under the weight of the project.
Click to expand...

In 2018, we saw the release of the Sonic Chaos re-imagining demo, of which there's some overlap between team members, notably Mr. Poe, TheStoneBanana, Michael Staple, and A+Start. Sometime between then and now, this wonderful team got together and decided to pick up Vertebreaker again. How did all of that manifest and when did development begin?
Click to expand...

Well, before that, I led what remained of the ProjectHC team in trying to create a Darkwing Duck game. I had made a contact at Capcom during E3 and was hoping we could run through them because of their earlier NES game and the recent release of the Disney Afternoon Collection. While we did that, I thought of the grappling hook we wanted in Vertebreaker and decided to try adding a simplified one to Darkwing to boost the appeal and just get in some practice since I didn't know how I wanted to approach the more-complicated one. It turned out that we weren't able to get anyone to pick up that game officially, so still without any paid work, I had to find something else to move on to. Fortunately, I had been struck with an idea for implementing the grapple the way we wanted it, so I went back to what we had of the original Vertebreaker in HCGE and hacked away at it until I actually got it working. I showed it to the rest of the team and attempted to start the project up again, but two of the main members, one being Rick himself, were both having problems with excessive work hours, and it sort of stalled out again.
In the mean-time, I met Mr. Poe, who I already knew from earlier in ProjectHC, at two separate instances of Sonic Fan Jam, and we had been talking about the work he was doing on his own, which ultimately led to his Crimson Engine and Sonic Chaos
I was really impressed by the demo, and even more about how quickly they were able to get it together. Since I needed more people for a proper development team of my own, I asked those members of the Chaos team if they'd want to work on a project with me, and they all said yes. I opened the floor to idea pitches while at the same time checking back in with the ProjectHC team. Rick was finally starting to get some more free time, and all three were interested in restarting Vertebreaker with a larger team
Work on Vertebreaker with the full team started around mid-July 2019.
Click to expand...

This demo was put together pretty quickly then. It also advertises Methyl as a new engine powering the game, which seems like HCGE's evolutionary kin. What spurred its creation, and what kinds of new and interesting features can we expect to see made use of in Vertebreaker?
Click to expand...

Methyl has several parts that were upgraded/changed from HCGE, along with some ideas that were brought in by Mr. Poe and TheStoneBanana, some of which were inspired by their work on/with Crimson Engine. With the state of HCGE's script system, we were off to sort of a rocky start, and since several of us needed the project to move along soon, it was proposed that we do some things in a way more familiar to the two other programmers. That led us to create a new engine tailored toward the team we had, and with the three of us on that task, it went pretty quickly.
HCGE has always been built with the intention of keeping it compatible with lower-spec hardware, so in that sense, there were some limitations that we've abandoned with Methyl. For one thing, you'll see an even greater use of color, and probably some more interesting graphical effects given that we're working directly in C now. Some other features are more internal, like the difference in how graphic and collision data are stored and managed, and the tools we're using.
Click to expand...

Will this eventually be a public game engine like HCGE, or is this intended for internal use on the team's projects?
Click to expand...

We're not really sure yet. At the moment it's just internal. We'd have to finish Vertebreaker before we could consider doing anything to make it an end-user thing and managing any kind of support/etc if that's the route we want to go.
Click to expand... 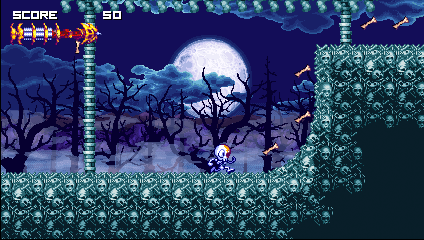 About Vertebreaker itself. Is there anything that can be said of what to expect? The main character Skelly, just what's that guy's story?
Click to expand...

We're hoping to have a little more on Skelly available when we release the Halloween demo, but some will be saved for the full thing.
In contrast to the sort of "sandbox"/"playground" level in the SAGE demo that we hoped would let players get a feel for the kind of physics we've implemented, the Halloween demo will have a more-traditional sort of level, ideally what will become the first part of level 1. For beginning players, it starts out a little more Castlevania-like in play style, but as they get used to the things they can do with the grapple, they'll be able to move around more quickly and freely, and be able to find alternate paths with some hidden stuff that's not necessary to just get an ending.
For our minimum scope, what we can do if we just meet our minimum funding goal, we'll have 6 large levels, each with 6 distinct sections that you can travel back-and-forth between as-necessary to solve optional puzzles or otherwise complete an optional special task. About half-way through each, there will be a miniboss, and at the end will be a full boss. There's a smaller final level with at least one final boss after all of that. We're also planning to have some expected stuff like a time attack mode and a boss rush mode.
Click to expand...

Funding goal and another demo you say? Will we be seeing this on a crowdfunding platform soon?
Click to expand...

We plan to launch some sort of crowdfunding campaign along with the next demo on Halloween. Our original plan was for Kickstarter, but we're not 100% sure yet due to some unfortunate politics going on right now. It is the most well-known and successful method, though.
Click to expand...

I'm looking forward to it. I have one more question, which may just be the most important.
Will Skelly actually perform a Vertebreaker in Vertebreaker?
Click to expand...

It seems there will be a more fleshed out demo soon, accompanied by a crowdfunding campaign. If you like what you see, you may want to support the project when that time comes.
The current Vertebreaker SAGE demo can be played right now on our showcase here.

What is Vertebreaker? Vertebreaker is a fast-paced action platformer with a hook - a grappling hook! Slash away at enemies and swing around the level on a bungee line! Zip to higher places or to gain speed! You are a skeleton on a mission - stop the forces of the dead from gaining the power to...
Reactions: Perfect Chaos Zero and Valeev