Hello! I am new around here, but a few of you might know me from Mario Fan Games Galaxy.
I am starting this project which is mostly an experiment:
Sonic with linear, Mario-esque platforming style.
You still get all of the classic abilities we all know and love, but the pacing will be generally slower
and possibly comparable to that of the master system version of Sonic 1. (You know, the one with the autoscrolling level!)

It is still very very early in development, no name was thought for it yet, or any story or anything really.
But possibly the zone lineup will feature a few genesis classics "reimagined" (maybe each zone could have 4 acts, similar to the world/level system in SMB1) as well as master system ones, of course.

The game is being made in GameMaker Studio using, of course, a Mario engine (Mario Worlds Engine by Gatete, to be exact), which I have modified so Sonic could have his trademark abilities. Sprites are the "Mario-style Sonic" by Neweegee. 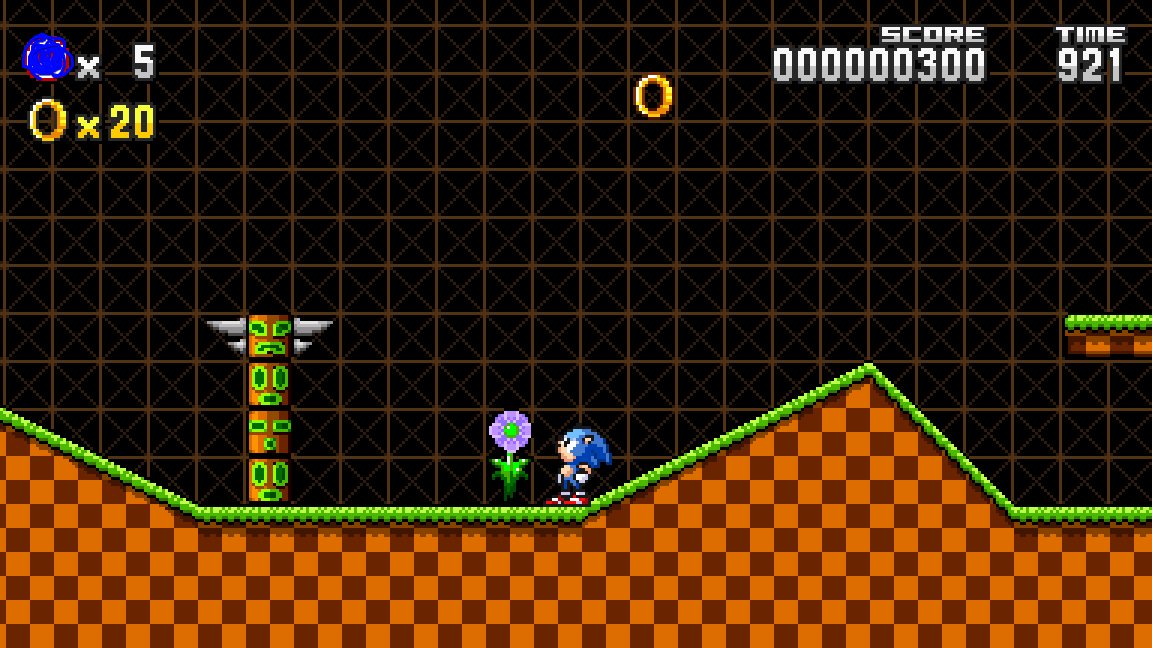 aside the super peel-out and spindash I plan to include the insta-shield too. (maybe the drop dash, but probably not)
but yeah, so far it's nothing major, just programmed sonic's abilities in to see how it would work out.

I will keep updating this as I develop it further.
Reactions: SoniKast, Super Dirpy Fox, LightHedgehog and 4 others

While it's unconventional, a more linear Sonic game like the Game Gear/Master System games would be interesting. Digging the graphics and sprite work, but I'd reckon for Sonic and his speed, your bottom screen shot is probably what you should aim for as far as screen size is concerned.
Looking forward to seeing more!

Yes, the bottom screenshot is the game resolution, the gifs were just to show the action.

Today I made some new things and decided to put up a video so you can see the progress:

Hey there. Just a heads up that this project isn't dead... I've just been busy with other fangame projects I'm also working on.
Reactions: Sslaxx

We're glad to hear that.

Wow! Looks GREAT! Considering this was once a MARIO engine of all things... It looks great!

This ain't dead yet!
Hopefully we'll have an engine test soon...
For now, look at how much progress was done.......

It seems to have a lot of elements from the mario series, which is cool. I like how it really resembles the master system games.

It was written on top of a Mario engine, so yeah. Not all Mario-related features were removed yet.

Something that will have to be tested, though, is the physics. They're still Mario physics. All I did to it was add Sonic's abilities to it.
When I release a playable demo/engine test, feel free to say which things should be tweaked in the physics to make it work better (although not completely, as I still want it to be a bit like Mario's)

The fact that you built a Sonic engine ontop of a Mario engine is really amazing imo. Keep up the good work!
You must log in or register to reply here.
Share:
Reddit Pinterest Tumblr WhatsApp Email Link
Top Bottom