I've been working on this for a little while, and it's still relatively early, but I figure I wanna share it with the world. A new 3D Sonic Engine/possibly game, made in Unity. Not based off of Hedgephysics, either; it's entirely original code. It's also much more based off of the Adventure era when it comes to controls, rather than the more modern/blitz sonic-y controls other engines usually use. Example video:

Planned features:
External level loading (Don't need to recompile a whole game to add a new level! Modding friendly!)
Easy-to-use netplay: even those who don't understand networking can sync new objects with relative ease!
Downloading custom levels over the internet (With some limitations; hosts, understandably, may not want to spend their bandwidth sending potentially large levels to clients who don't have them, so they can set some limitations to this, or disable it entirely if they want)
Playable Tails
More abilities, like grinding and the light dash
A better camera
Some degree of automation, usable for things like loops
Reactions: Greedy_Raider

While I, myself, am not much of a fan of the Adventure era of Sonic, this looks incredibly polished so far! Keep up the good work.

Sonic Adventure 2: Battle is my favorite Sonic game, so for me this has a lot of nostalgia value.

This looks great so far! Would definitely be interested in seeing where this goes. The jump / spin / spindashing animations look spot on to SA1.

Looks really cool so far. It seems most 3D Sonic fan games try to emulate Unleashed/Colors rather than Adventure. So I'd be very interested to see where you go with this. Do you have any other preview videos online?

Thanks for all the positive feedback; I appreciate it. I'm afraid I don't have much else to show yet, as I'm working on it fairly intermittently, but there's definitely progress being made. Slowly but surely.
Nearly finished with Sonic's abilities, with just grinding left, and some effects on things like the bounce bracelet and light dash, so I guess I'll comment on how I've changed them to work here:

-Spindash functions similarly to Sonic Adventure 2, where you must hold it for a moment before it becomes the actual spindash. However, in its place, instead of somersaulting, you will do a regular spin if you release the button before you start the spindash.
-Bounce bracelet returns, with some tweaks. A quick tap of the button will no longer initiate it, instead, it must be held for a few frames. Not nearly as long as the spindash, but this was done to prevent accidental death from trying to light dash in the air. In addition, releasing the button before hitting the ground will cancel the bounce; effectively giving you an option to return to the ground very quickly.
-Homing attack and light dash are basically the same as they appeared in SA2.

I tried to think about what I disliked in the Adventure-era games when coming up with these. Of them, the light dash being inconsistent was definitely a big pet peeve of mine, so I've tried really hard to make the light dash more usable and less prone to error here. I also never really felt like the bounce bracelet had any real utility, and was more a tool of "well, the game said I need to use the bounce bracelet now" so I tried to make it act more as a complement to Sonic's existing moveset, rather than a specific move required in a handful of places. I'm fairly satisfied with how he controls at the moment, but I figured I'd still like to get some feedback on these ideas, since how the game controls is very important.

Man, this looks so cool! In the back of my mind i've always wanted to make a SA2-like fan-game, so this is right up my alley. Great work!

Good luck. All those Sonic Adventure games feel rushed and unpolished. They haven't aged as well as hoped.

Alright, I've finally finished the grind rails! It took a while, as I had to design my own spline system to make it work, and as I stated in my previous post, making them easy to create, and to create well, took a while. What I have now is a system where you can place down way-points, and create curves between them to make complicated geometry easy. 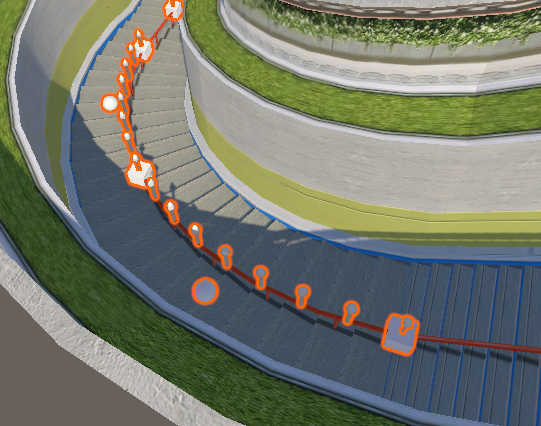 For reference, the cubes are way-points, and the spheres adjust the curve.
So, here's some gameplay showing off some of the physics a bit better, and of course, the brand new grind rails.

Huh. Haven't posted here in a solid month. But I have been developing this still! And it is coming along nicely.
I've spent most of the past month working on two things:
1. Rewriting the physics to be better. This isn't really visible to the standard viewer, especially given what little footage I've shown off, but things are now a lot more stable now.
2. A little pet project of mine: native Blitz Sonic level support. It can load Blitz Sonic levels, completely un-altered, at run-time! This may not be the most practical thing in the world, but I thought it'd be cool to see these old levels relatively compatible with a new engine.

With that being said, here's some more footage. Showing off one of the more complex Blitz levels working perfectly in it, and along side that, just more footage showing gameplay in a more fleshed out level.

It's been a minute since I looked at SFGHQ, but I noticed this wasn't getting an immense amount of attention. I just wanted to say that I'm very much loving the updates! Keep up the great work on it, this looks like probably the most accurate to SA1/2 engine in the making right now.

Thanks! I appreciate the support.
I've continued working on this quite a bit, adding a bunch of features, replacing the Sonic model and re-animating it. It looks a bit nicer now, and is much closer to being "feature complete".
So, as seems to be monthly tradition at this point, here's another progress video.

Been a hot minute since I posted here, but I figure this warrants it; alpha release is officially available. It's still early, of course, featuring limited content, but I'd love to get feedback on it!

I've just tried out this alpha in single player and I must say this is looking very promising so far.
Sonic controlled way better than I expected with very smooth turning and I didn't feel like I lost control when he reached his maximum speed unlike what a lot of Hedgephysics games have done, though I think Sonic's top rolling speed could do with a little increase as earning Sonic's top speed via rolling doesn't quite feel that much faster than the average running speed.
I'm also pretty impressed with the backwards compatibility feature you're doing for legacy Blitz Sonic stages as I do have quite a nostalgic connection with some of these often primitive stages that people made for one of hundreds of Blitz Sonic engine variants. I hope you continue to expand upon this feature in the future since if this games gets more recognition, there's no doubt going to be people who will want to port Sonic World stages to it and having a solid basis for their ports will help them in the long run. A built in stage editor for finer level object adjustments could help with this as well but I digress.
I think the only real problem I can really point out for this alpha is the camera, or rather the camera's position. I feel like it's rather close to both the ground and Sonic's back which kind of makes it harder to see what's around Sonic without rotating and I think this could risk problems if there will be hazards and/or enemies that will come up behind Sonic like a motobug or a homing missile. This is something I can imagine could be fixed by zooming the camera out along with any sort of custom stage cameras added in the future. Would also be nice if there's options to change controller bindings in the future since I'm not personally a fan of using the B button to spindash and prefer using X for that action.

Other than that one camera querk, I think this is looking like a very solid foundation for a 3D Sonic fan game and I can see it becoming a new viable option for people who want a Sonic game that they can make custom stages for without having to deal with game engines or modding existing Sonic games. Keep up the good work.
E

I've downloaded the alpha, and I can say that it does work quite well. I do have a few suggestions. 1: Increase the momentum requirement for continuing vertical velocity. Sonic ends up basically climbing up walls in some levels. 2: Add in a few Sonic World-exclusive objects to the level importer, as switches, dash rings, grind rails, and scripted springs are often required to complete a level. 3: Increase the size of the flying enemies. The control is good enough here and the main enemies big enough to make the homing attack optional, so why not commit to it? This would make a great game even better, and I hope to see what comes next!
You must log in or register to reply here.
Share:
Reddit Pinterest Tumblr WhatsApp Email Link
Top Bottom