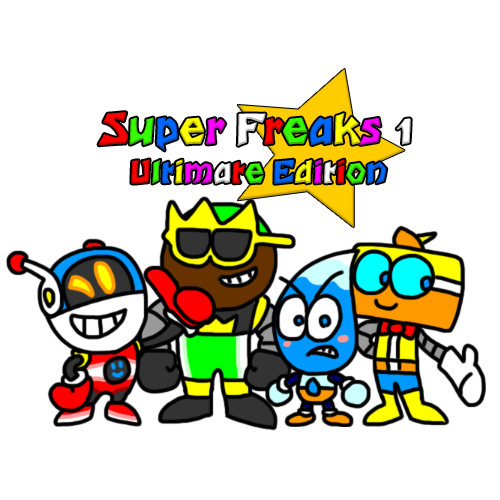 UPDATE 2:
This demo is now outdated. I'm leaving the SAGE booth untouched, but if you'd like to play a more up to date build of the game, check out the below links:

UPDATE:
What's up gamers, SuperFreaksDev here. I wanna give a huge thanks to everyone who played this game. It's gotten some great reviews and is starting to get good word of mouth too. I've mentioned this in a few places, but I was actually taken aback by how well the game was received.

AlmyriganHero (creator of Frebbventure, which you need to drop everything immediately and go play right now) has made an in-depth video review of the game as well, going into great detail about the high points and flaws. Spoilers, it got a great score. I’ve adjusted a few things since the review in a currently WIP build. 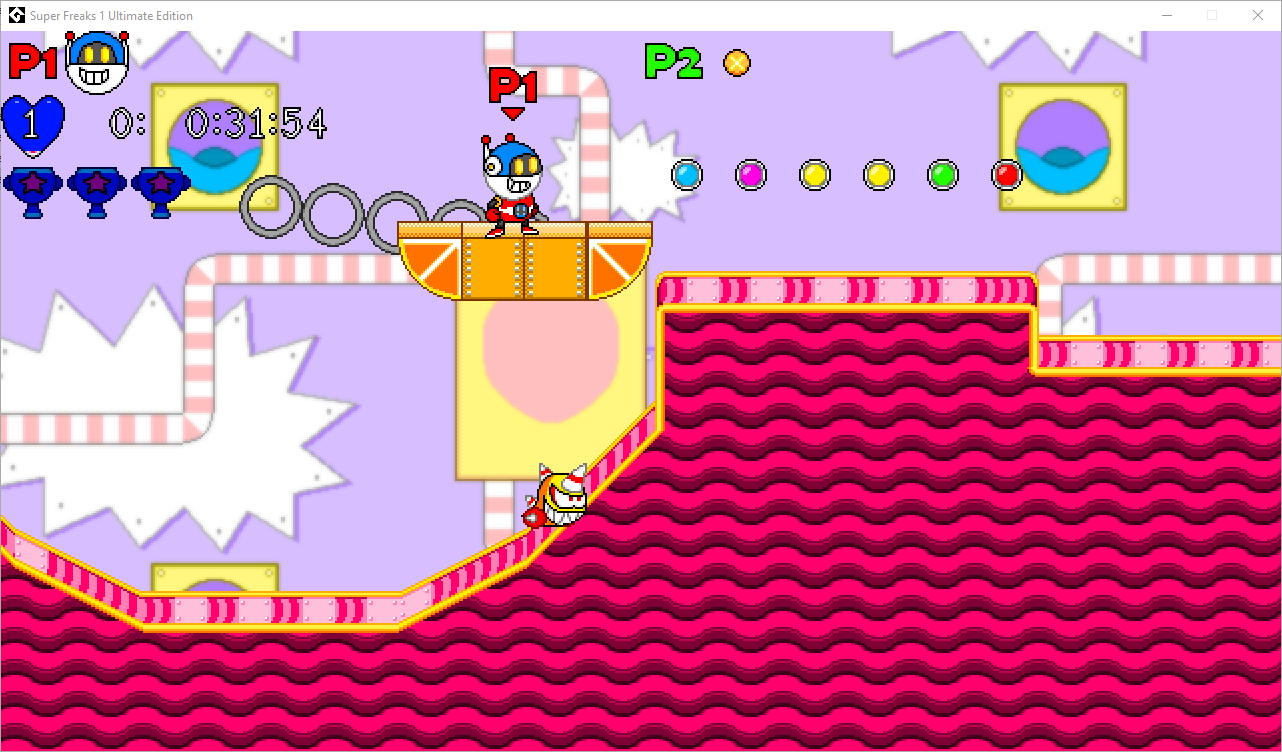 Many years ago, when I was a dorky 12 year old in 6th grade, I made Super Freaks 1. It was awful in every way, but I loved it like a son.

Over the past several years, Super Freaks 1 wound up undergoing so many updates and overhauls that it's become a Ship of Theseus, and arguably isn't even the same game anymore (this is why it looks kind of ugly, by the way). It's now a surprisingly modern platformer, with actual level design, weirdly advanced graphical features (including the ability to play the game at any framerate), and most importantly, a robust co-op feature. Two players can tackle this silly game together, armed with drop-in/drop-out multiplayer, a NSMB style bubble, and an optional Knuckles Chaotix style rubber band tether.
By collecting hidden trophies as you progress through the game, you can unlock several challenge modes, several of which are available in this demo.

This is Demo 3, which includes 13 levels (7 normal levels, 3 secret, 3 bosses) out of a planned 30; this is half of the main story mode! The demo also includes several of the challenge modes, which will be unlocked as you progress and collect trophies. Please let me know how it is. I consider this game a prototype for much more exciting projects I'd like to do in the future, and I'd like to "get it right" the first time around.

By the way, if you want to do multiplayer (and you should), I recommend Parsec. 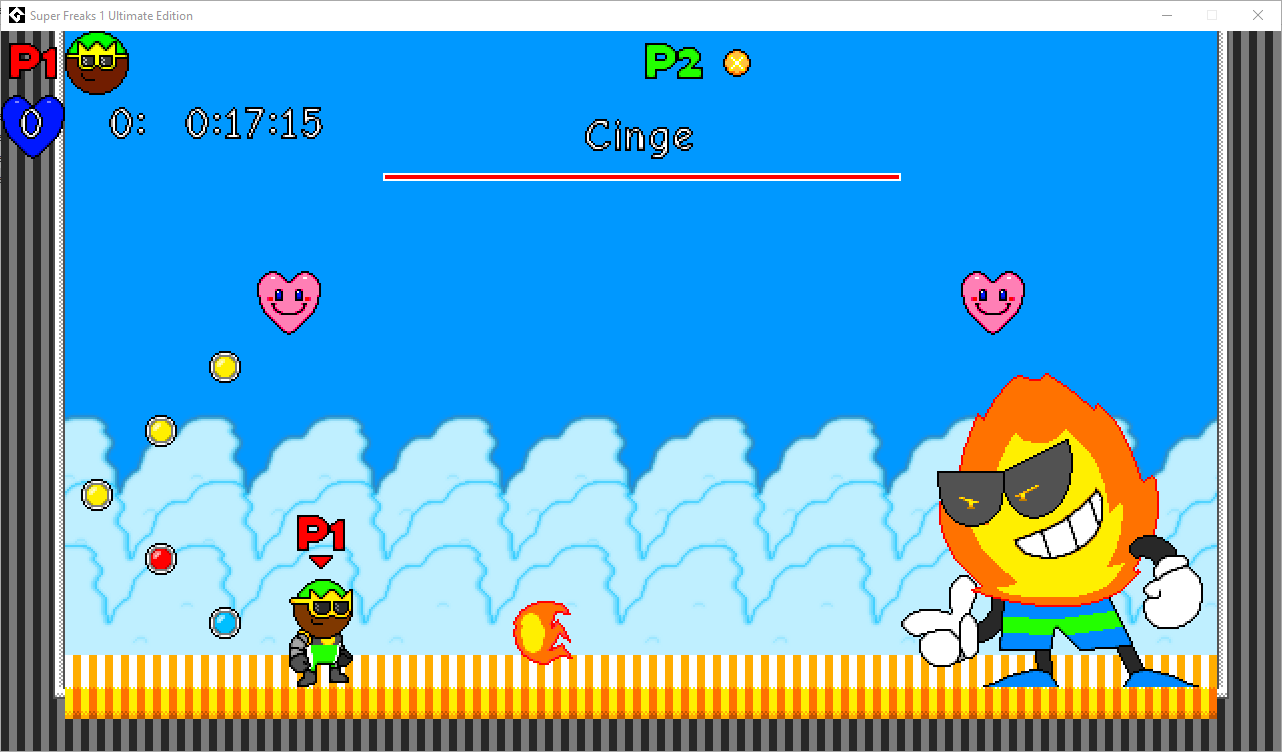 STORY:
Alright, let’s see what kind of shoe-string premise this dumb game has:

In the United States of Craziness, everything is chill thanks to Unlimit Energy, a magic energy source that lets anyone who has it warp reality. One fateful day, however, everything went wrong in the happy-go-lucky galaxy when all of the Unlimit Energy was stolen! Kranion, ever prideful, grew sick of being clowned on in Fast Cars Underground 2. Rather than admit he sucks at the game, he rounded up his army of Kranibots that he has for some reason and went on a galaxy wide looting spree!

Yet, there is hope. In a stadium on the floating Mystic Island live the Super Freaks, four half-brothers who always beat Kranion and other villains by using Unlimit Energy and Unlimit Powers. Unfortunately, no Unlimit Energy means the Super Freaks are denied their greatest weapon! The Super Freaks aren’t chumps though—they have several techniques they’ve honed over the years thanks to training with their Uncle Swordsman. Can they beat Kranion and take back the Unlimit Energy before he plunges the galaxy into mediocrity? …obviously yes! But they’re gonna need your platforming skills and dexterity to do it. Maybe bring a buddy along with you too. 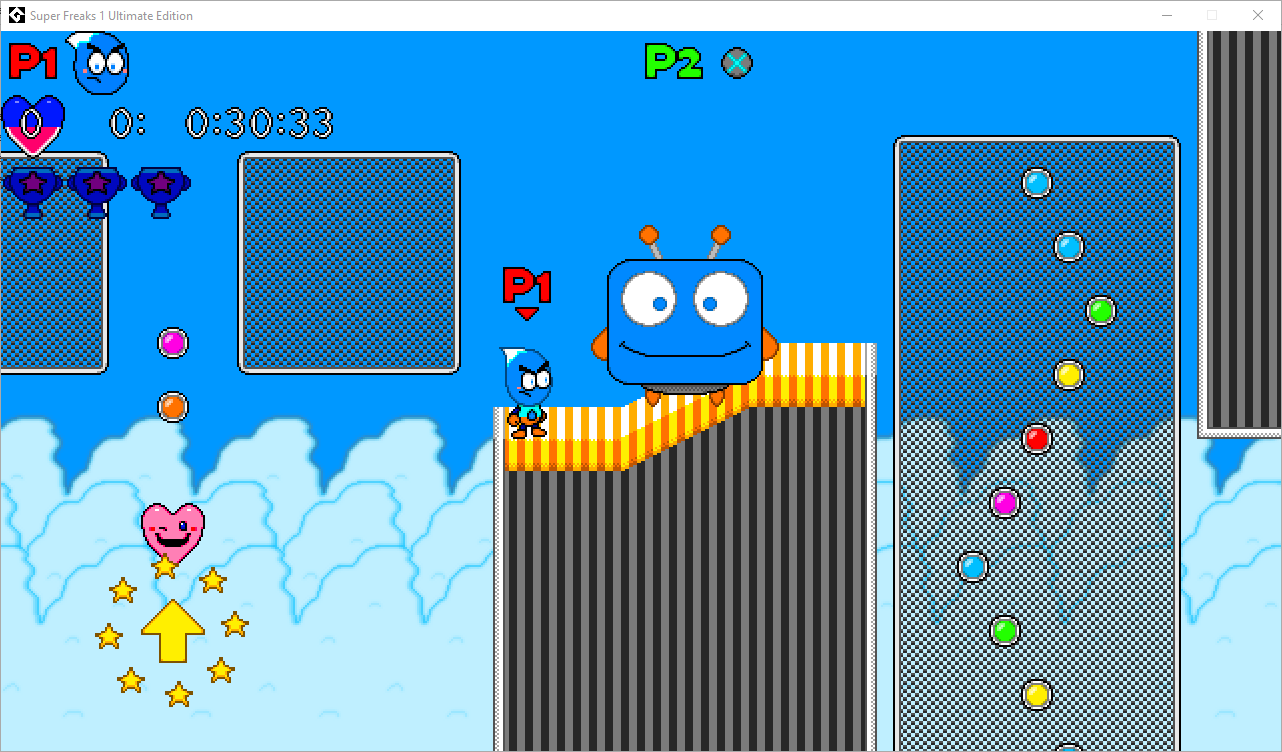 GAMEPLAY:
Super Freaks 1 Ultimate Edition is a 2D platformer. You'll need to go to the right (usually), bop some enemies, get to the end, etc. Compared to other platformers, the Super Freaks have a few extra tricks up their hypothetical sleeves, so let’s go over those:
DEFAULT CONTROLS:
You can remap your controls in the options menu, and even bind multiple buttons to one action. 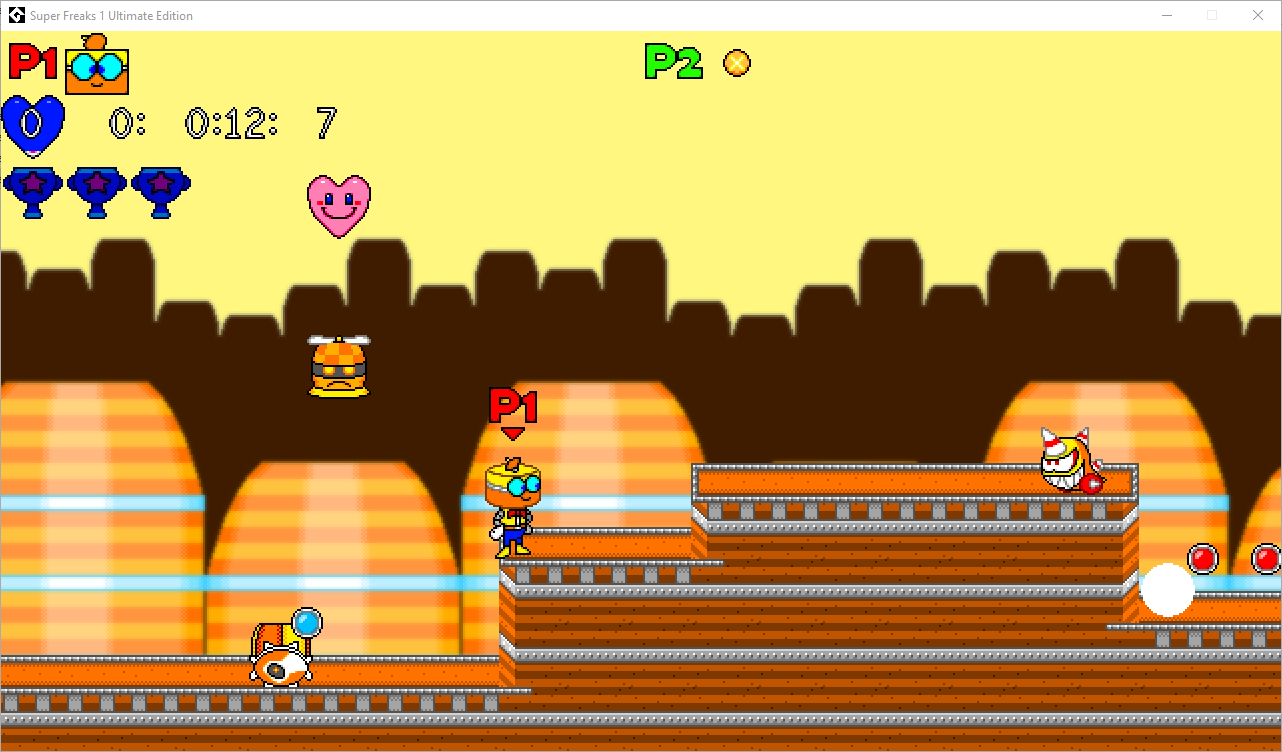 Made by:
SuperFreaksDev aka Joe Mama (yes really)
Kingnormal (about half of the characters)

Made with:
Game Maker Studio 2

One of the games ever. Jokes aside, i LOVE Super Freaks 1 UE. Everything about it feels right, from the early 2000s game feel, to the controls, to the levels.... its incredible.
Reactions: SuperFreaksDev
The jumping on enemies, and their bounce off the screen is super satisfying! I actually love the old-school Game Maker styled art, and got a good chuckle from the sound effects.

The game also has solid, snappy controls! I do wish there was perhaps a run button, just to speed up the platforming a little bit, but I can't find any glaring issues with the game. Nice work!
Reactions: SuperFreaksDev
The best way I can depict this game is like a cheeseburger and fries, sure it's nothing too crazy or cool but it is good for what it is and it works well, but like a cheeseburger it doesn't last long.

Nevertheless, you did a good job.
Reactions: SuperFreaksDev
Read more…