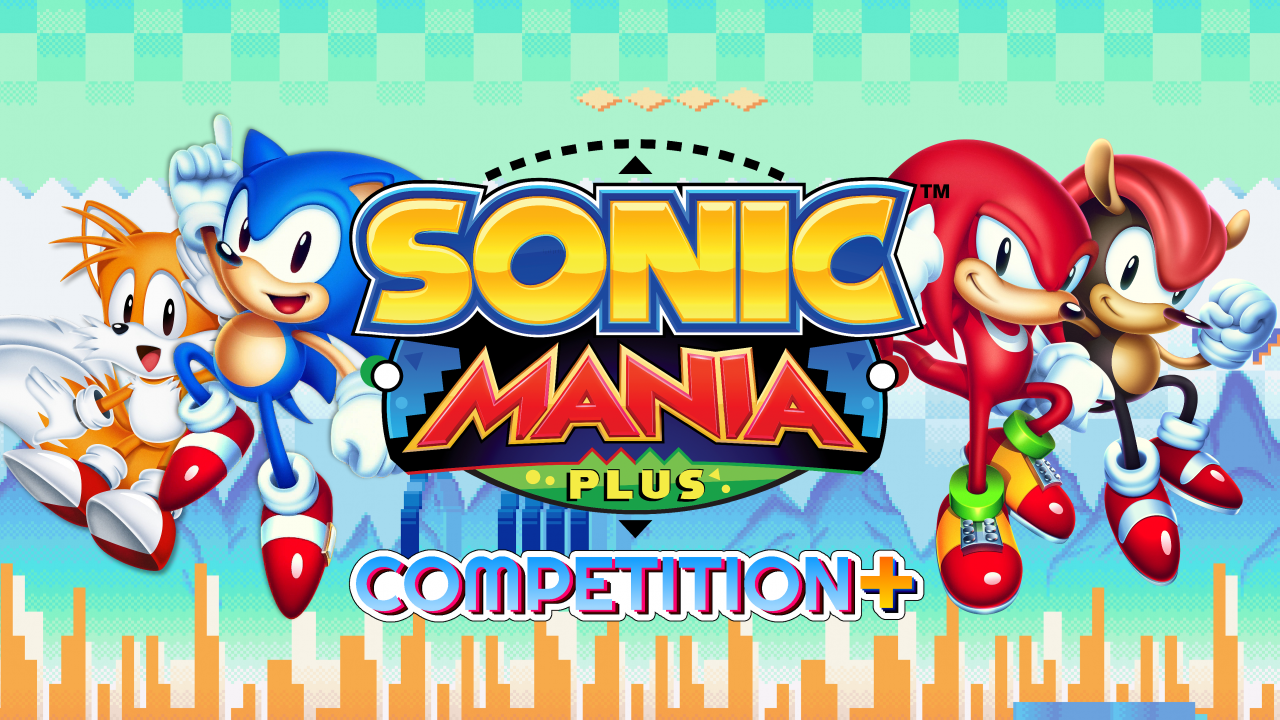 Ever had the thought about how cool it would be if all stages could be played in Competition Mode? Well thanks to this mod, you now absolutely can! All stages from both Mania Mode and Encore Mode are now fully playable in Competition Mode with up to 4 people! Even Custom Zones tag along for the ride! Have a trip into space with Gust Planet Zone or take it slow with Isolated Island Zone for example. With Competition Plus Version 5, Fun is Infinite...


Here's the interesting backstory for this mod. Back in January of 2018, I was messing around in the menu of Sonic Mania trying to see if I could alter the background in any way because I was bored and wanted something to mod. While doing so, I stumbled upon the entity known as "VSZones". This entity controls where the level select icons take you. Upon finding them, I immediately took the opportunity and edited one to take me to another stage. It worked (as you could probably guess)! I knew I had something on my hands, so I decided to do another test. This test was to see if I could add more "VSZones" entities into the level select, and yes I could! With this new-found knowledge, it was time to strike and make something out of it. I then remembered an opinion that I had shared with my cousin one day while playing Sonic Mania with him. I mentioned to him that I wish Competition Mode had more stages to choose from. So, I knew exactly what mod I had to do. And that's the history behind Sonic Mania Competition Plus.

Funny enough, I was in such a rush to push the first version out there and show off my wonderful discovery to the world that I never actually made the stages competition safe... But not to worry as I quickly went to work on version 2 which would fix this and make the stages actually competition friendly. Back then, I honestly thought version 2 would be the end of Sonic Mania Competition Plus, but after Sonic Mania Plus dropped, I knew I wasn't ready to let it go yet. With version 3, I had successfully ported it to Plus, for the most part, added a few more stages, and introduced Encore Mode to the mix, which was just a palette swap at the time due to me just porting the levels straight-up from Pre-Plus Sonic Mania. However, in version 4, Encore Stages were now the actual Encore Stages and not just color swaps. Version 4 would also finally manage to get every stage into Competition Mode for the most part. So again, honestly, I thought version 4 would be the final version, but then I got a DM from CarJem Generations asking about Competition Plus and that he really enjoys the mod and would love to help with it. With that, CarJem joined the team and started coding up a storm for version 5.

"PLEASE MAKE SURE YOUR MOD MANAGER IS UP TO DATE..... EVEN IF YOU THINK IT IS..... PLEASE TRIPLE CHECK..... THE INFINITYZONE API (which this mod rellies on) WILL ONLY WORK ON THE LATEST VERSION OF THE MOD MANAGER!!! ALSO, THIS MOD DOES NOT SUPPORT DATA FOLDER MODE IF YOU ARE USING IT, NOR WILL ANY MODS USING INFINITYZONE IN THE NEAR FORESEEABLE FUTURE WILL! TURN IT OFF!" - CarJem Generations

"ALSO, PLEASE MAKE SURE YOUR Data.rsdk IS UP TO DATE ALSO!" - angelthegamer
Click to expand... 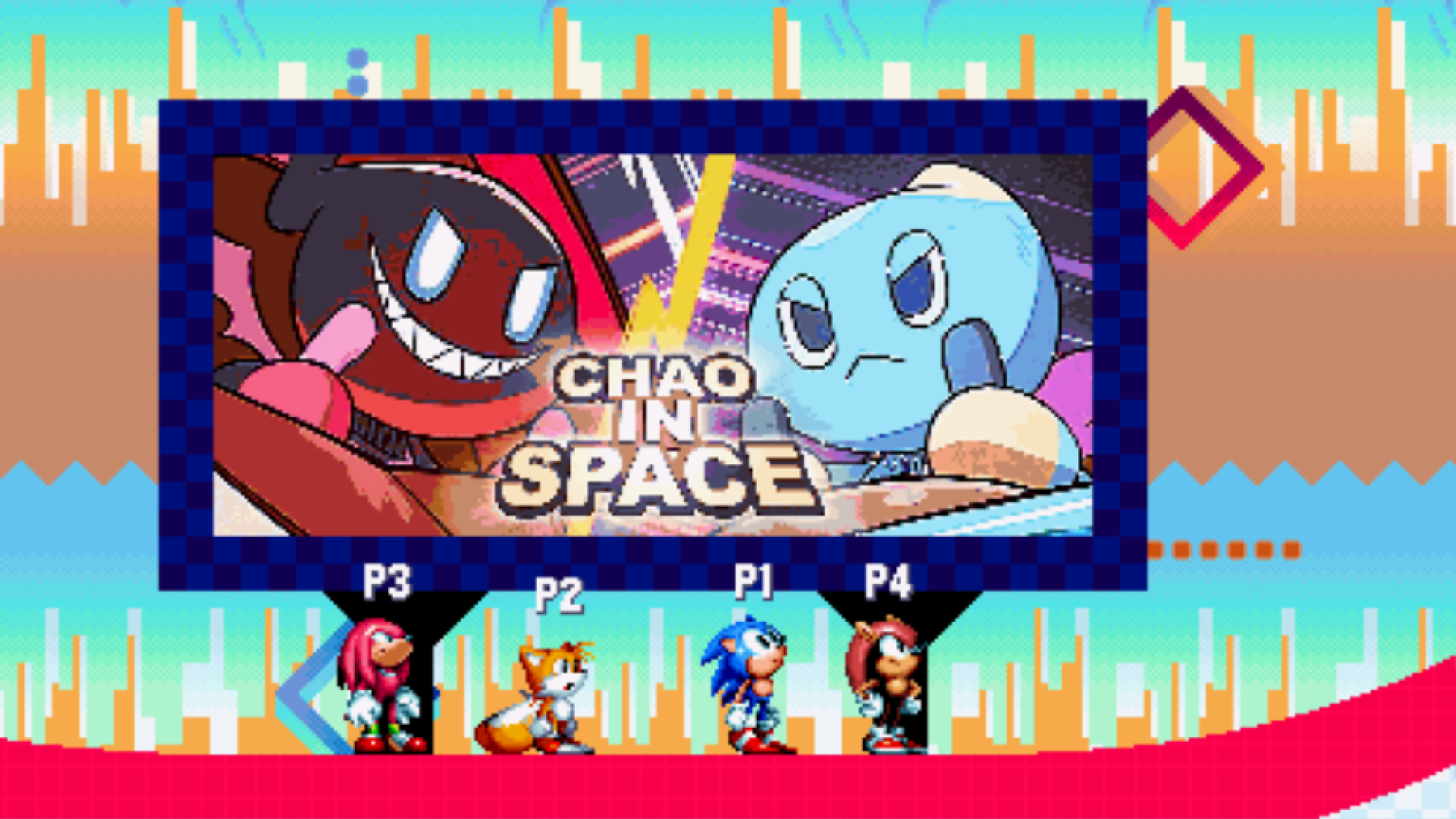 ​
Checkpoint Zone acts as the HUB world for this mod. In here, you'll be able to alter match rules and advance settings, check the leaderboards for everyone's rankings, and just have fun running around with friends. [NOTICE: Checkpoint Zone is NOT finished. There are things still left to come and plenty of visual improvements to be made.] 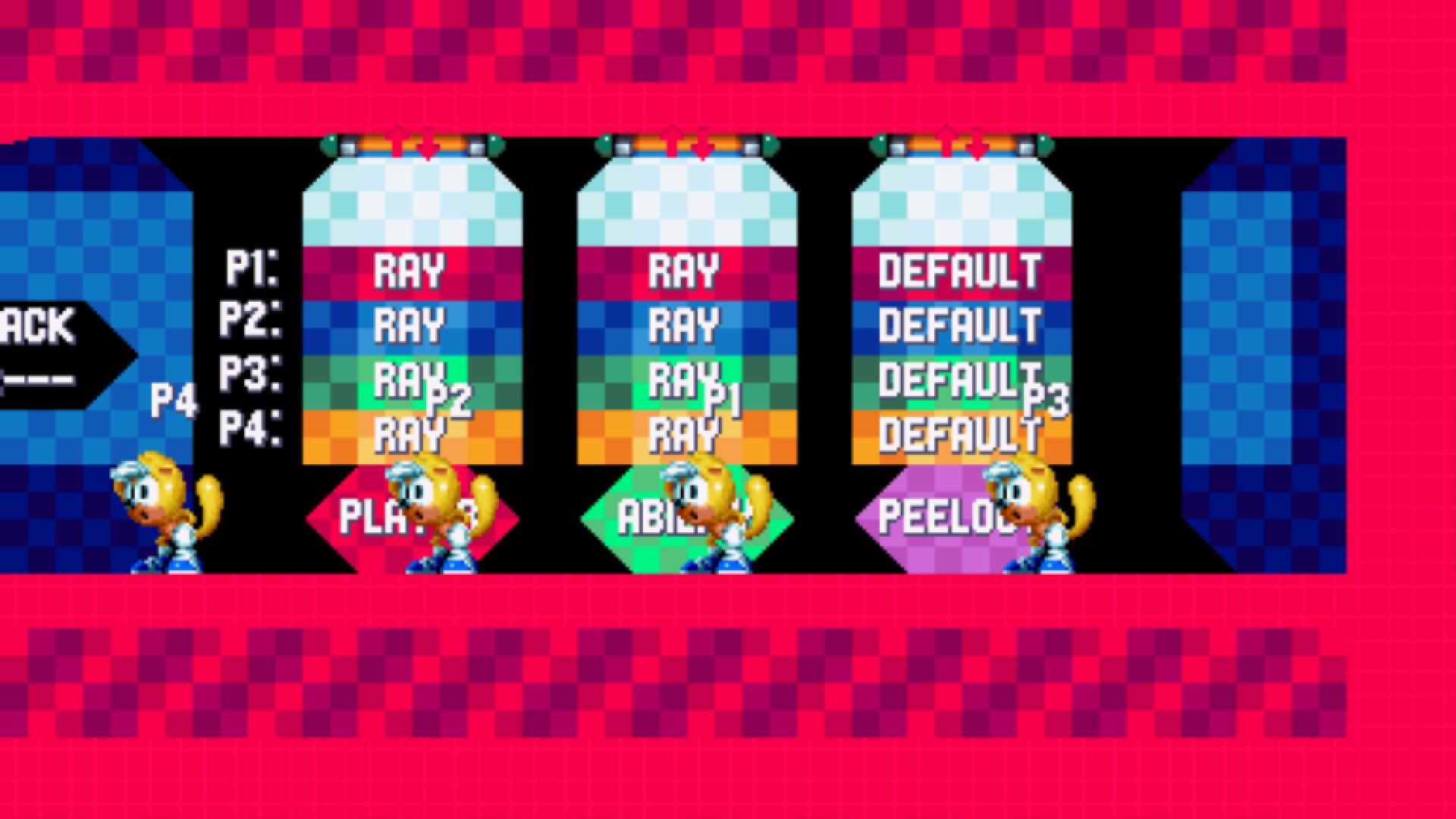 A cool feature of Checkpoint Zone that I wanted to point out is that you can now choose the same character as someone else! Meaning if you all wanted to play Sonic, now you can! No more rushing to get a character first because everyone can be exactly who they want! 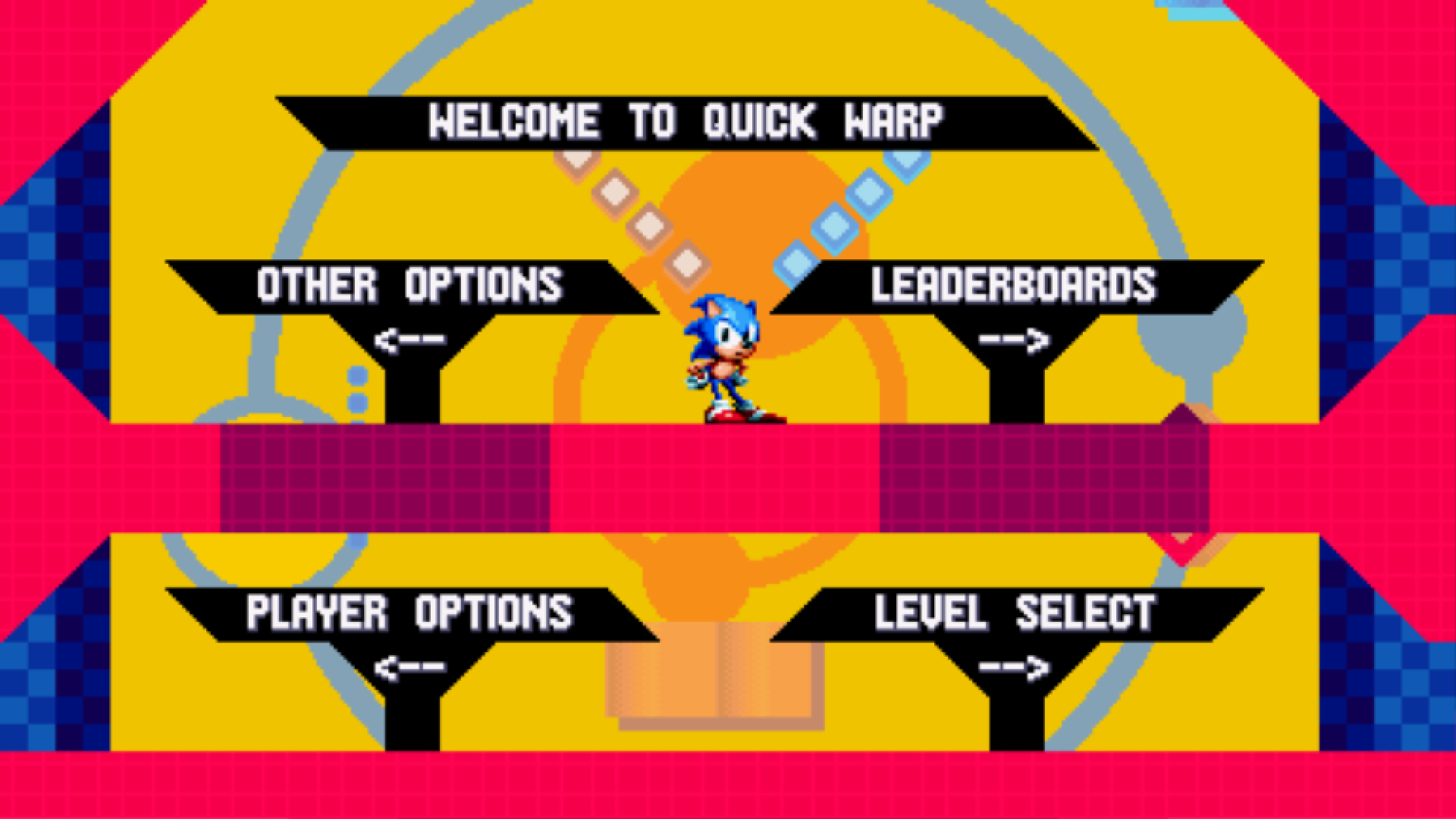 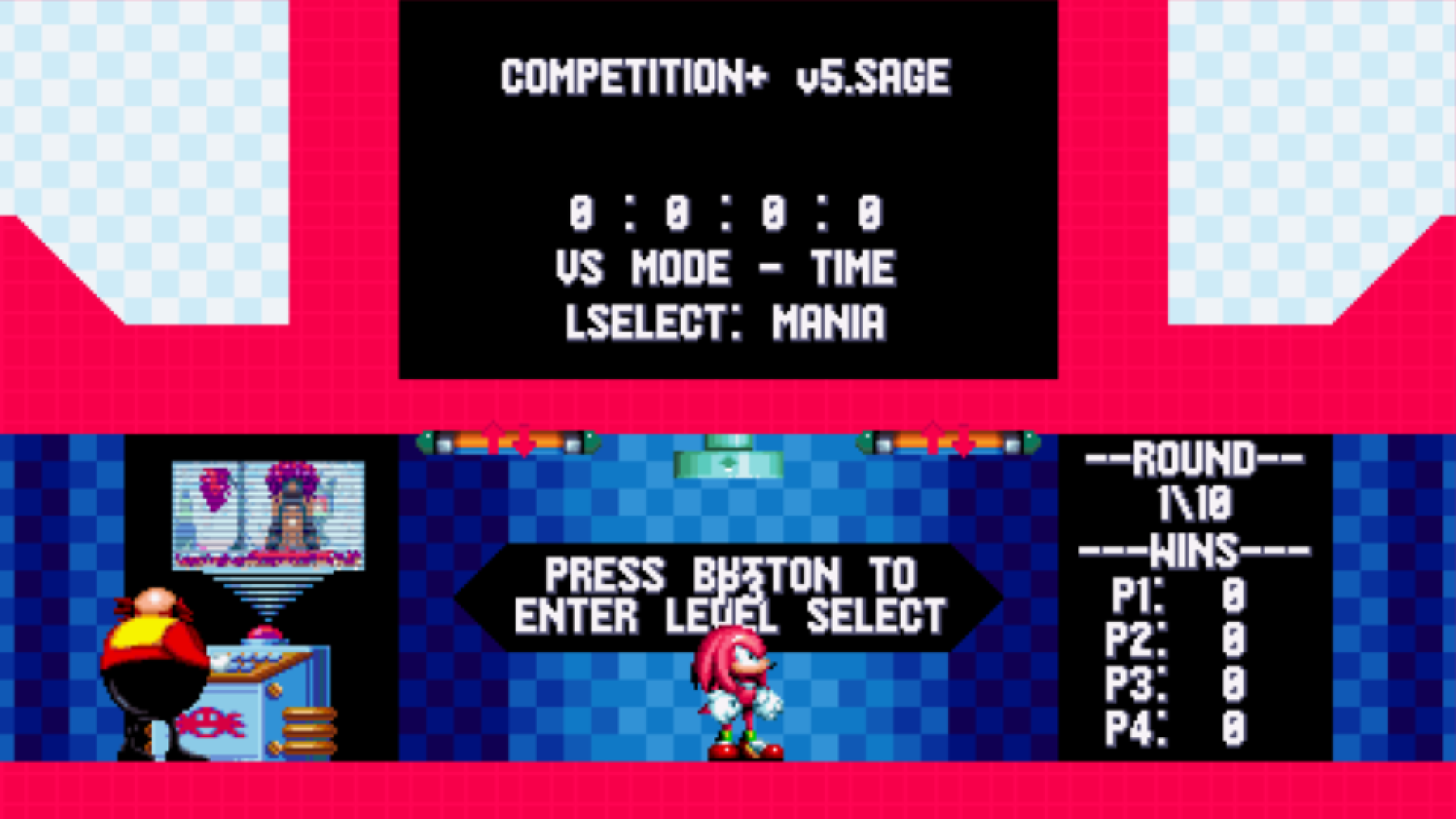 ​
Whenever you're ready to actually start a match, go and pay a visit to Dr. Robotnik/Dr. Eggman. Use the controllers placed along the ceiling to choose your Level Select, then press the button to travel there. You'll be sent to the Level Select of your choice, waiting with loads of levels at your disposal to race in. 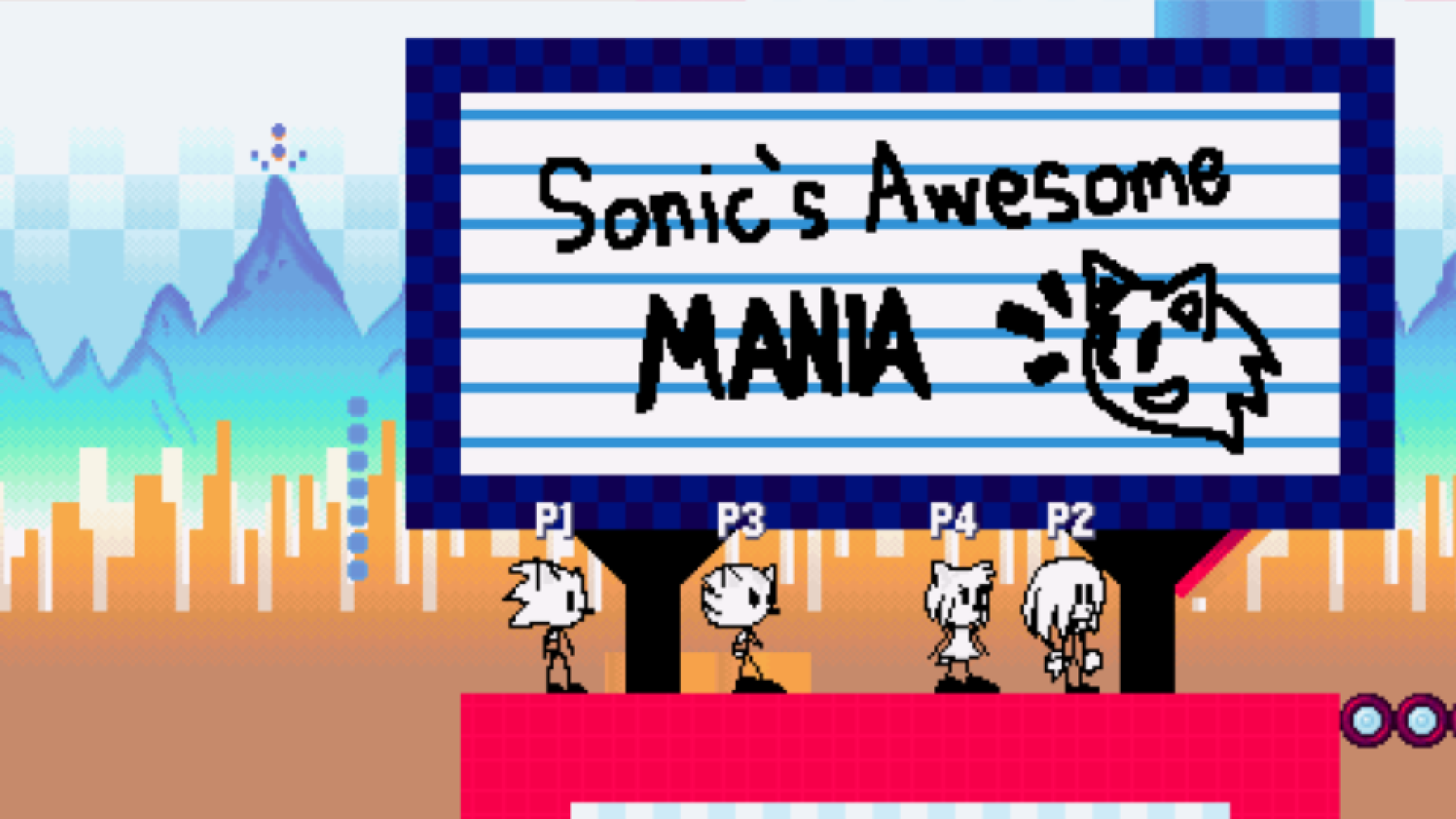 Oh! And heads up, certain Character mods should work. I can't guarantee that they all work, but just test them out. Some works while others don't. Stage mods, however, don't work. But don't worry as many, many, more custom stages are planned to be added in the future.


HERE'S JUST A BIT OF WHAT YOU CAN FIND! 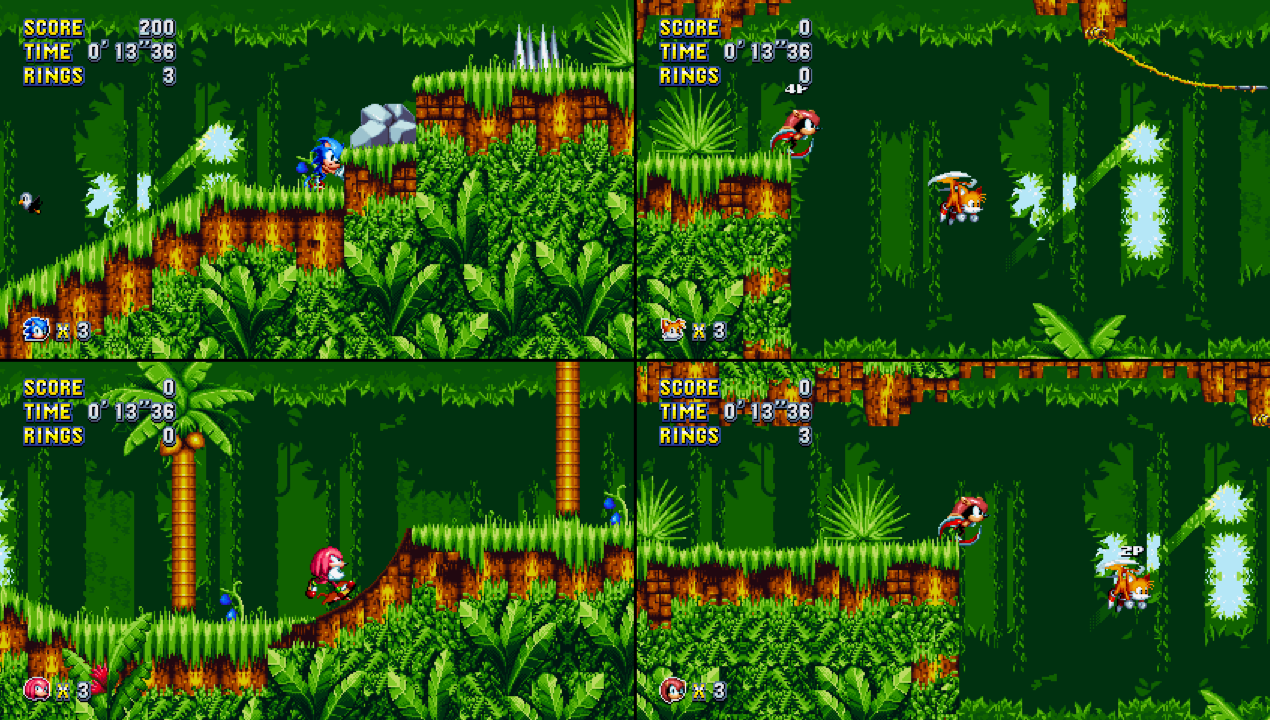 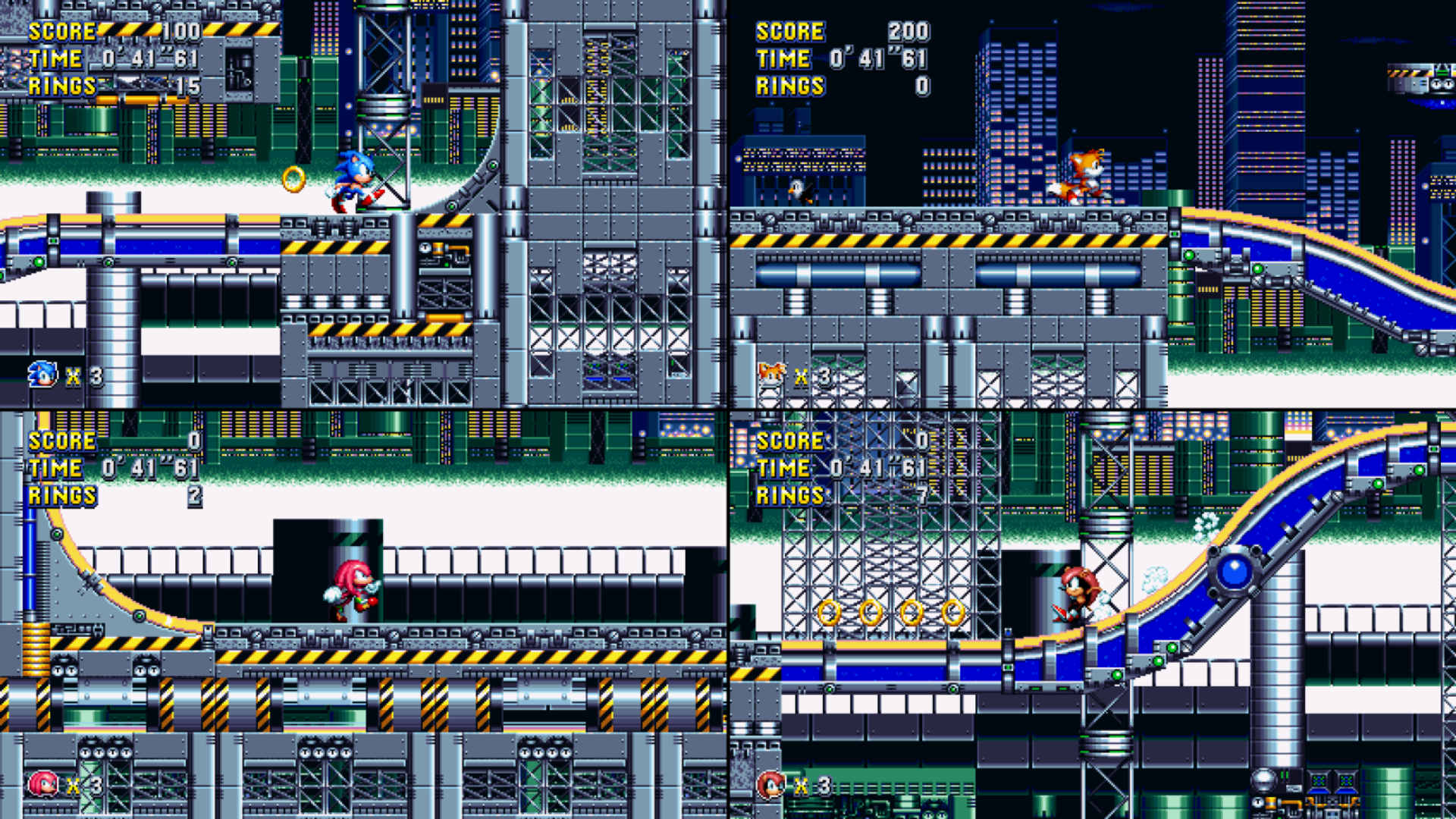 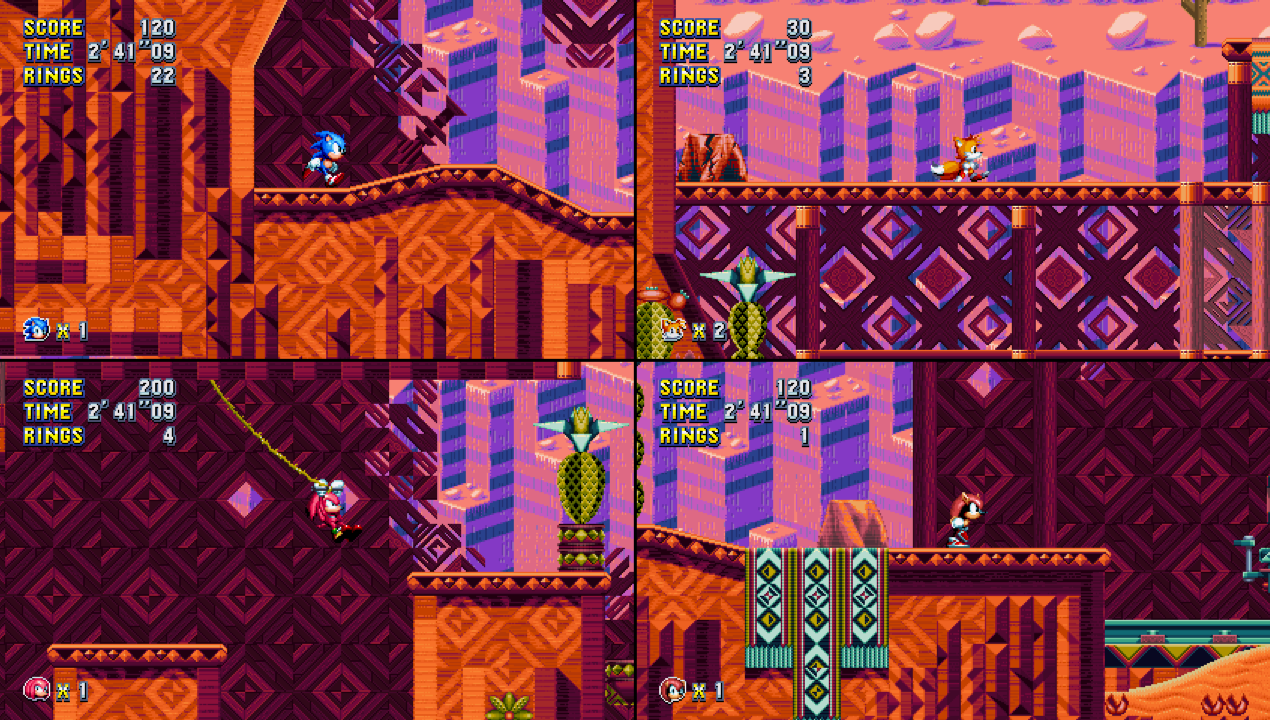 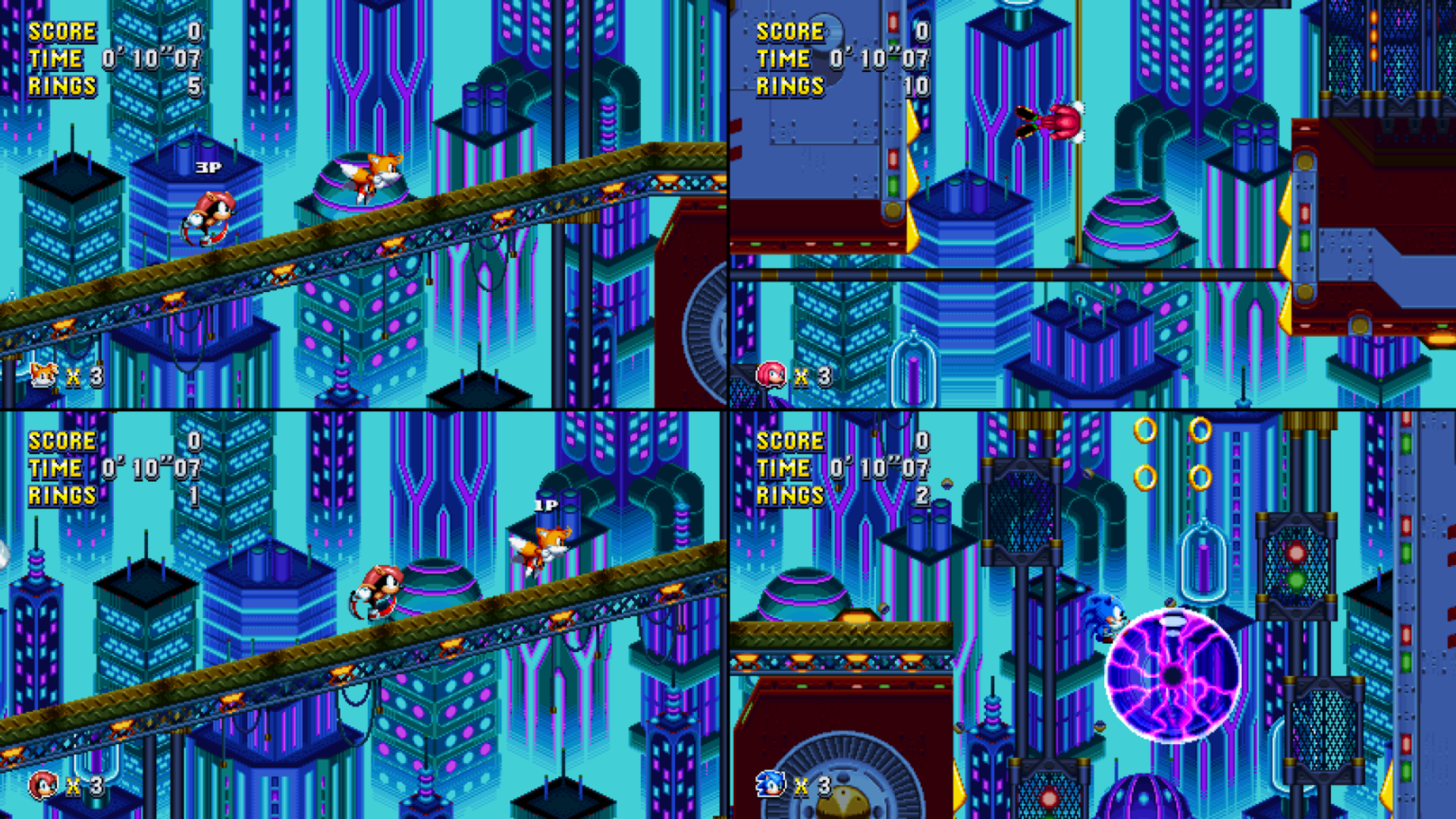 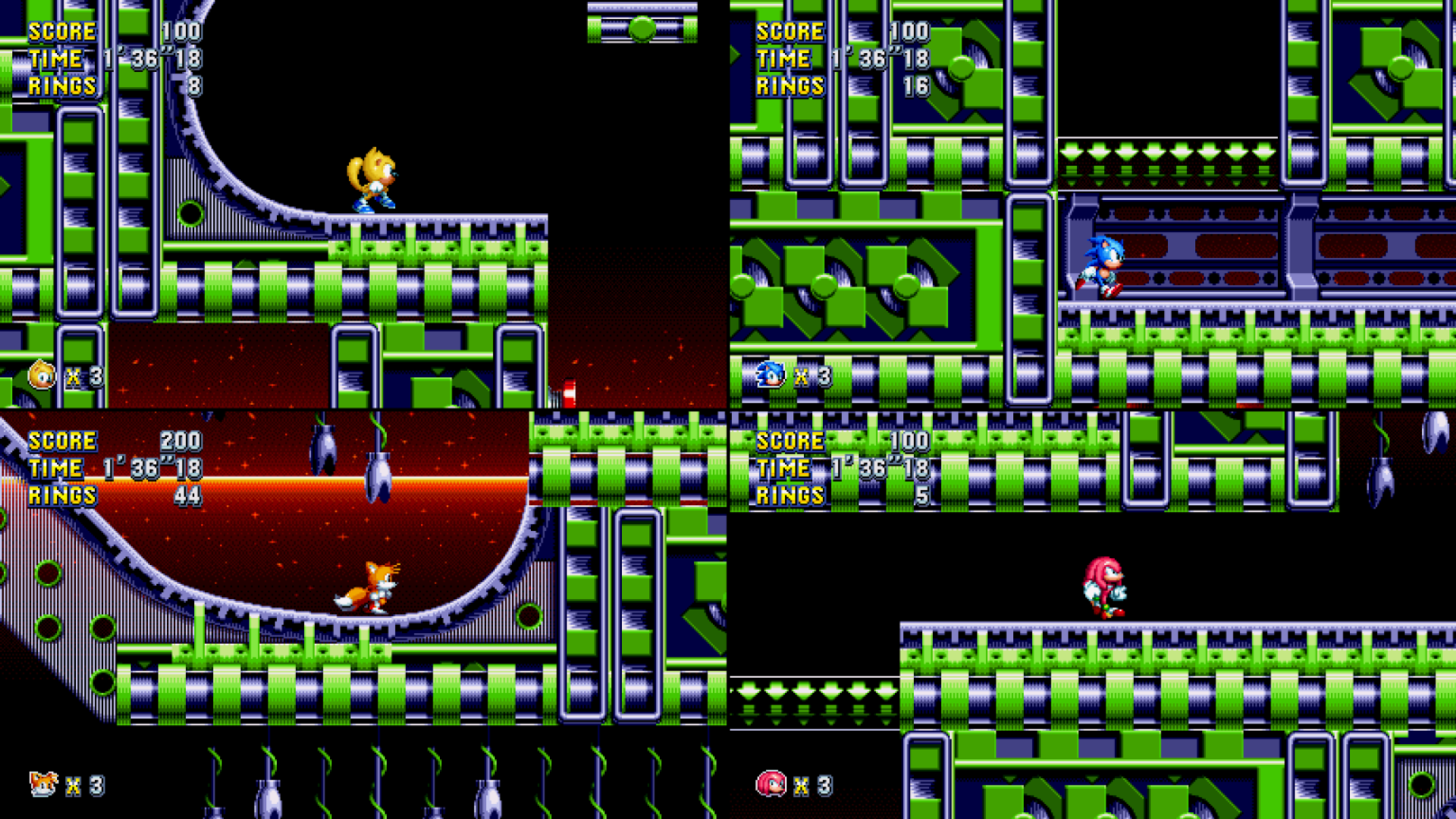 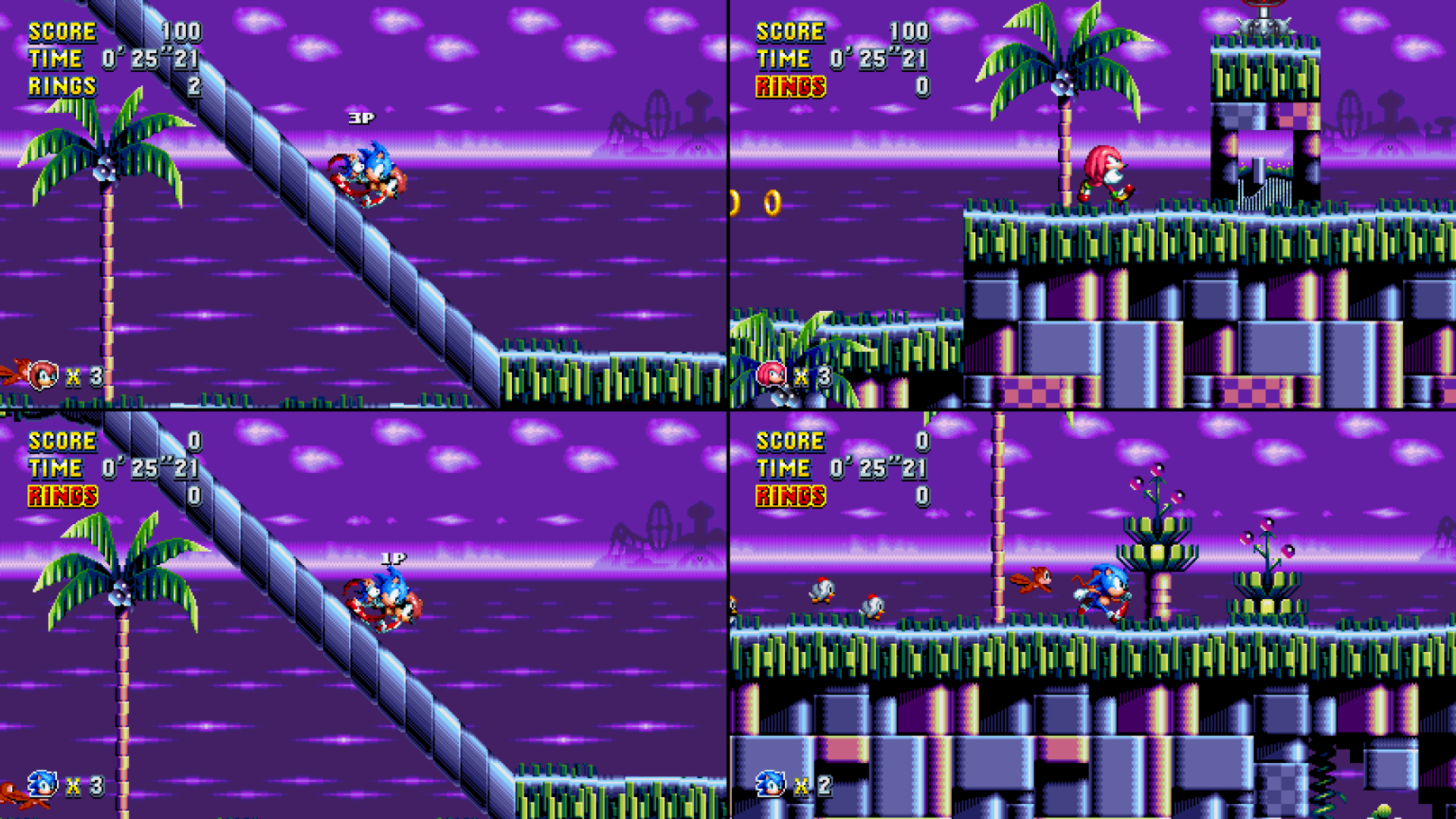 Team Competition Plus
• angelthegamer - Owns the mod "Competition Plus"/ Made base levels Competition Compatible / One of the announcer voices / Title Logo / Translations for Headers / Billboards / Overal Spriter for Competition Plus / Bug Finder
• CarJem Generations - Coded pretty much everything for Version 5, piecing everything together / Logo Screens / Checkpoint Zone / Technical Enhancements
• SuperSonic16 & CarJem Generations - Working on InfinityZone
• Kapuccino - Originally helped mess with the Competition levels to find stuff
• Apollyon Woman - Made "Competition Plus" Menu Header
• Garrulous64 - One of the various announcers to choose from
• Xanman - Made Thumbnail Art and 500x500 Art for SAGE page
• mr.watermalon - Made HUB "ACT" Icon for Checkpoint Zone
• CodenameGamma - Helped fix several coding issues that were happening / Made High-Resolution Competition Plus logo used in Xanman's Thumbnail Art and 500x500 Art
• N'Oni - InfinityZone logo

i like it
Cool! Especially including HZ from Halloween Challenge! Yeah. Exe. How about you put in Mushroom Kingdom Zone from Somari the Adventurer Genesis? Holy cow how is this still a demo? Also, don't waste the numbers. Add some points. The next one should be called Version 5.2 or 5.MP for misfits pack.
Last edited: Nov 18, 2020

HyperMarioKart said:
Cool! Especially including HZ from Halloween Challenge! Yeah. Exe. How about you put in Mushroom Kingdom Zone from Somari the Adventurer Genesis? Holy cow how is this still a demo? Also, don't waste the numbers. Add some points. The next one should be called Version 5.2 or 5.MP for misfits pack.
Click to expand...

The reason we're not adding numbers after Version 5 (like 5.1) is because this is just a demo. So rather than using numbers, we're adding a code name for that version after Version 5 (like 5.EXE). When Version 5 actually gets finished, that's when Version 5.0 will actually come out. (If that makes since, hopefully the way I worded this isn't confusing)
Um, why are you saying that so long after I posted that on literal friggin' november 14? Anyway, awesome mod, it's just so cool if there were stages from the trilogy then that would just make this mod the best ever, also the somari mushroom kingdom stage from somari the adventurer a rom hack for the genesis. This does use InfinityZone, right? Is that Sonic's Awesome Mania?
The game crashes almost every third round if you select 10 or more rounds match.
I don't know how to unzip the file. I can't find the executable. ):
My game constantly crashes after one round, doesn't matter what zone I pick, help?

Edit:(I think its because its demo but if I'm wring plz correct me.)
You must log in or register to reply here.