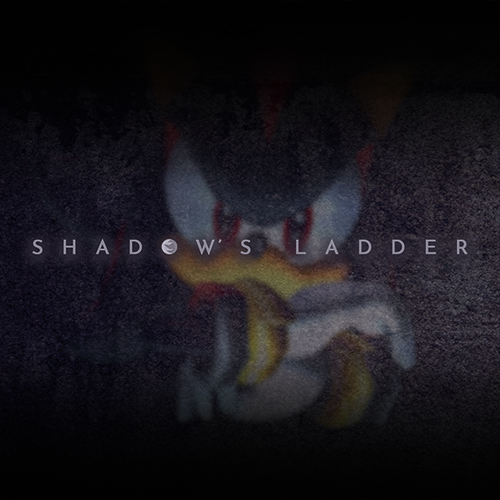 What is real and what is not? Explore the mysterious island where Shadow the Hedgehog wakes up. Destroy the G.UN. robots, find the keys, open the doors, and prepare to face something darker and mystical.
Shadow's Ladder is experimental light horror game, influenced by old school games. This is an attempt to mix the 2D style of Sonic games with the dark atmosphere of Japanese horror games.
Work is still in progress, but we glad to share it, our new demo at SAGE 2020.

this game is pure gold, it was love from first sight, i love the asthetic of the game, the horror theme and all of it, i made a lot of theories about the game and its story, what was that black thing that attacked us on the underwater lab? or the thing that attacked us after that looks like silver? is shadow lost in his memories? Hope the full game to be even better than the demo, thank you for this masterpiece! (if i said something wrong, please forgive me, my native language is not english)
Wow! This was amazing, it was quite the experience! At first, I thought it was a short demo when I took the easy way out at first but when I tried again with the Full demo path I was quite surprised! This game feels great! I love the controls, the fluidity of the level design, and simple puzzles too! I'm glad The use of OG shadow voice clips was a fantastic choice and this does a great job at portraying Shadow's character very well! Definitely an experience I appreciate investing 3 hours into! So much better than I expected!

A few things I would change would be D-pad support, a timer (because I get time overs when I don't realize I'm running out of time) and maybe make some of the breakable object a bit more obvious.

I'm looking forward to seeing how this mysterious story plays out in the future!

NOTO G
Brooo, who would've thought someone would put QR codes in the background of a fangame yooo this has me reallly intrigued

"Do you remember, V? You betrayed all your dreams."

becuasesonicthehedgehog
ur the great guys man ur great
Read more…

A Sonic horror game that's more than just cheap jumpscares and edgy imagery is a rad idea, and I love the way you used the Sonic series' momentum based movement to turn standard horror game progression, into sort of exploratory action design [or Metroidvania if you're a mongoloid]. This is a very interesting demo, but there's some serious flaws. The biggest is the lack of d-pad support. Having to rely on an analog stick for a 2D platformer makes for less precise controls. Another huge one is the lack of checkpoints. I got all the way to the chase sequence at the underground waterfall facility and died, and it sent me back all the way to the start of the area, about 5 minutes of progress lost. Such harsh punishment for dying could be excused if you were to ditch the ring style life mechanic and go for a standard life bar, or you could keep rings and add checkpoints after cutscenes. Not being able to aim your gun is a bit iffy, but seeing as how you only really need it for specific situations, it's not too big of a deal. Also, it definitely needs a better name- I love all the little horror references like the title and Toluca Lake, but those who don't get the reference to Jacob's Ladder will probably think it's a joke name.
Overall, I'm very intrigued to see where this goes, even if I couldn't be assed to go back through the lab facility after I died to the Death Stranding monster chase.
Dude, I can't believe how long I had this game downloaded but didn't play it, and that's a shame because it's so amazing. The atmosphere, the gameplay, the puzzles, the story so far sounds pretty cool. The only thing I found frustrating was the last Ark level, since thanks to the position of some of the flying bomb robots made them throw bombs a bit after or at the exact moment I went to the platform, making me die in such an unfair way. Also I find the Demonic Sonic design kinda silly, but that depends on someone opinion, so no big deal.
But overall I loved it, and can't wait to see the next demo :3
The download link is broken, just so you know. I'd like to play so maybe if that could be fixed...
You must log in or register to reply here.