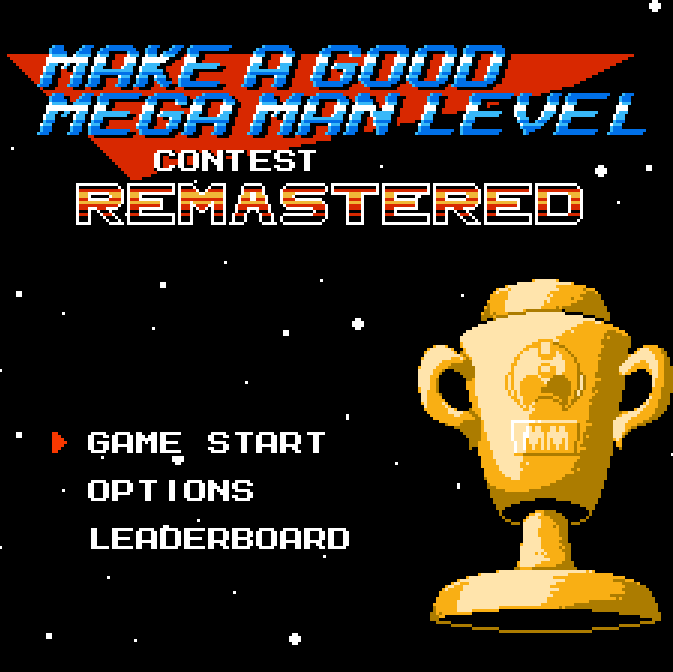 ​
The good news: A festival is being held in honor of Mega Man and his tireless heroics! The bad news: Dr. Wily shows up to ruin the fun, and basically everything at the festival tries to kill our hero. Mega Man must conquer an array of eclectic challenges in order to restore peace!

Inspired by the Super Mario-themed Make a Good Level contests, this is the game that launched the largest and most ambitious Mega Man fangame series ever. Contestants receive a "devkit" created in Game Maker based off of the classic Mega Man games and are tasked with creating the best level they can, after which they are judged by a panel of judges and compiled into a full game. Remastered, specifically, is a rebuilt-from-the-ground-up version of the original, much jankier and buggier version of the first game from 2016. Enjoy the original 20 entries as well as a redesigned Wily Castle among other extra bonus content!

Featuring:
For more information, check out the MaGMML website.

Changes:
- A boss gallery has been added in the basement of Dr. Light's lab.
- Slight tweaks to how Bass functions in Cheat Mode.
- The Jukebox now shows the number of the track you're viewing.
- Added missing credit for Chiptune Player in the disclaimer on game startup.
- A few small graphical tweaks.

Bug Fixes:
- Negative bolt overflow in the shop fixed.
- Custom Costumes should no longer erase save files with certain file paths.
- Implemented the GMS scheduler fix from omicronrex. Certain lag issues should be fixed as a result.
- Fixed a bug where you could absorb a bullet in a cutscene with Wily Machine TROPHY.
- Fixed inaccurate tiling to original game in Spiky Meltdown.
- Fixed a Spine falling off a ledge in Hard to See Land.
- Fixed the switch spikes in Neon Gravity not animating.
- Fixed the Weapons Archive flying out of bounds bug.
- Fixed that the health refill effect would softlock you in instant death mode.
- Fixed being able to block some invisible "projectiles" or spawners with Power Orb.
- Minor miscellaneous typo, formatting and visual fixes.
Share:
Reddit Pinterest Tumblr WhatsApp Email Link