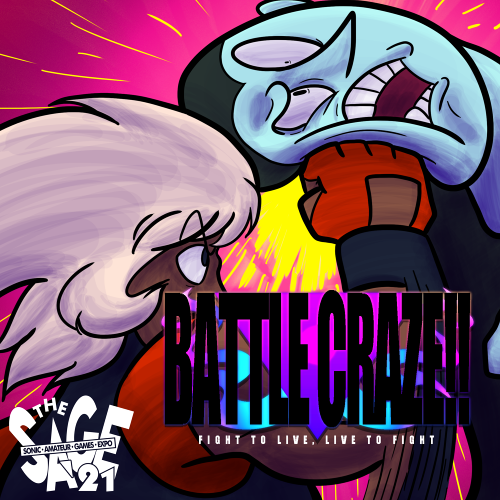 IF YOU ARE UNABLE TO DOWNLOAD FROM THE BOOTH DIRECTLY, PLEASE CHECK https://www.playbattlecraze.com FOR THE LATEST VERSION.

Welcome, one and all SAGE fans, to...

Battle Craze!! is a 2D fighting game which emphasizes animation, character, and intense arcade-style gameplay in a world not too different from our own. This version of the game currently runs on SUEHIRO's I.K.E.M.E.N. GO engine.

Battle Craze follows the events of the Battle Craze Tournament Series, a martial arts competition that takes place every five years, with the best of the world willing to compete. Although, something else draws those to this tournament. A hidden threat? The promise of wealth? Scores to be settled? For Ajit Sinha, he's here to save the world from a foreseen destruction only known to him, and nothing will stop him.

All controls are configurable for both keyboard and controller.

This version of Battle Craze sports 15 characters to choose from, each with their own motives and fighting abilities. Who will you go for broke with?

Our main hero, a college student who practiced various martial arts and has the innate ability to see the future through his dreams. Through this power, he learns of a cataclysmic event that could end the world, and it's up to him to take action.
TSUGUMI HONDA

A rising MMA star whose shot at glory was lost from her after a crucial match. Years later, she makes her return in Battle Craze to reclaim victory, and prove herself against the odds.

A fighting game aficionado who overcame his addiction to silver, and joins Battle Craze with his own self-made martial art, Shermsetsuken, to make his mark in history as a fighting legend.

Once hailing from an esteemed family of wrestlers, Wallace was resurrected as a revenant after a heart attack in the ring. Now he lives as a hitman for hire, with his latest contract leading him to a battlefield worthy of his strength.

The last of one of many scrapped projects by BioCorps. Reactivated after being released from the sea on the Bay of Gibraltar, and with their memory corrupted, they seek to find what their purpose in the world is.

The star face of the Ultra Wrasslin' Federation, la justicia enters the Battle Craze tournament as a final send-off before her retirement from professional wrestling.

A descendant of a long line of arcane practitioners, Boundary joins Battle Craze to investigate and tether the ties of a supposed catastrophe, predicted by Ajit.

An escaped BioCorps. super computer unit, bonded to a chameleon puppet. Driven over the edge from constant testing, Baxter runs amok, slaying anything and everything in his path.

BioCorps.' current soldier project, Ci-Ci is a biological human with manipulation over water, tasked with winning the Battle Craze tournament as his final test.

The current head of the Gardet Estate, and showrunner of the Battle Craze Tournament Series.

Isabella in this demo is a preview version. Appearance and function is subject to change come her official release.

Unique Traits: Each character has a unique status which makes each one stand out from the other. They will either always constantly be active, or are used via their Craze Technique.

Craze Technique: A unique manuver or power for each character that compliments their movelist or Unique Trait, usable by pressing either both Strong buttons, or C (this function's macro button).

Dire Counters: In addition to standard Counter Hits, which will deal extra damage, Battle Craze features Dire Counters, a special counter hit state that allows for stronger combo strings than standard special moves. Dire Counters are a result of hitting the opponent during recovery frames of certain command normals, specials, supers, and during their taunts. After landing a Dire Counter, the next time you use a move with a Dire Hit Property during that combo, the effect will trigger, extending the combo.

Craze Cancel: A global mechanic that uses the Craze Gauge to reset to neutral, with three different variants depending on the situation. Craze Cancels are activated by pressing either LP+SK, LK+SP, or the D and W macro buttons.

Side-C and Side-L: By pressing either Craze Cancel macro button over a character on the character select screen, you can choose between their Side-C and Side-L versions, which alters their Unique Trait, Craze Technique, specials, supers, and even Craze Gauge in rare cases. The changes are minimal, but substantial in how a character is played.

Some characters even boast a secret third side. Can you try to find them?

We have a wiki you can further read up on, and you can follow and get updates about the game as they come on either our Twitter or Discord server!

unexpected pleasure to find this game and enjoy it!

pros;
-ALL ANIMATIONS ARE SUPER SMOOOTH WOAH NICE!!
-mugen but it isn't a crap mugen with cgi and loud noises
-okay voice acting is pretty cool!
-everyone has surprising personallity
-there's an evil palette with unique voice and entrance animations? yes please
-all 3 [4 including that dark palette?] forms of sherm are really funny
-evil sherm quotes will go down in history as best quotes
-I thought not everyone has voice actors but most say something when taking damage or dead. [maybe some could talk more?]
-please if you crossover with any fighting game, put sherm in it

cons;
-most qcf x2 + k moves seems to be mostly attack barrage then big hit
-isabella's animations turn into ikue. i assume its a placeholder [I played first build posted on SFGHQ]
-the tag button mechanic isn't explained very well. like maybe put in a tutorial video with basic mechanics similar to how smash bros do their tutorial vids. Best to do this instead of hiding it in a .readme folder or hidden in command list
-in Character select screen, please change tag and turns icons to a more visible colour

you can use that idea if you need one for story mode. :)

I would love to play this again with a story mode that focuses on one main fighter or all fighters in one big story, like sonic adventure or mortal kombat.