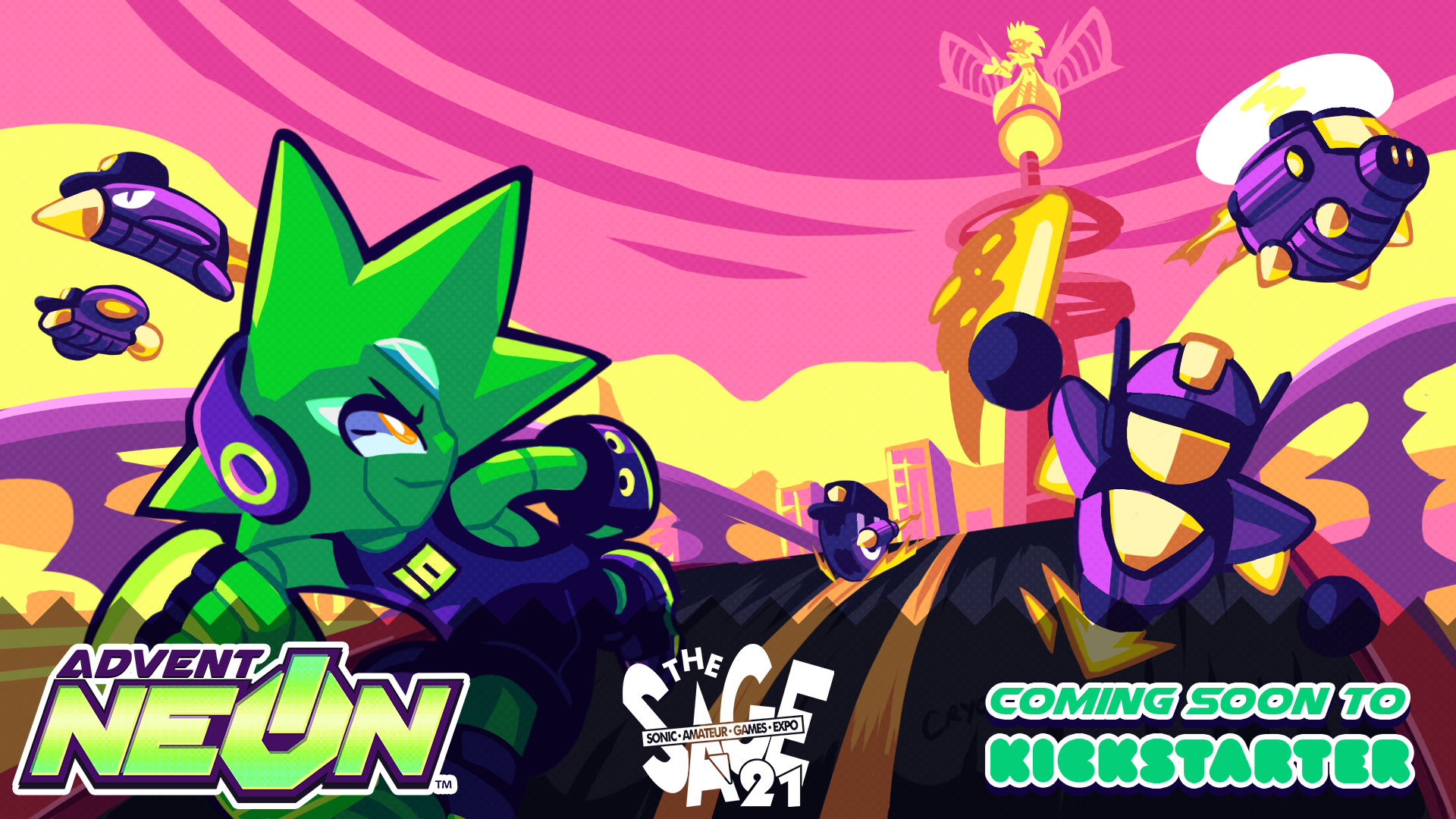 ​
Advent NEON is a solo-developed passion project meant to combine a ton of the inspirations I've had growing up into a single character and game.

With a focus on accessible, yet nuanced mechanics, speed, flash and tons of immediate power scaling, this game's meant to make anyone feel incredible as they tear through the opposition!

If you've enjoyed any of Sonic the Hedgehog, Megaman, Super Smash Bros, Celeste or even DragonBall, I highly recommend trying this game out!

(Configure keyboard or gamepad controls in the options menu!)
[Action]: [Keyboard input] -- [Gamepad input]
Move: WSAD/Arrows -- Left Stick/D-Pad
Jump: Space/C -- Bottom Face/Left Bumper
Punch: P/Z -- Left Face/Right Face + Direction
Dash: O/X -- Top Face/Right Bumper + Direction
Break Attack: Hold Dash + Press Punch + Direction (Can also be done with the Right Stick on Gamepad.)
"Tap up to Jump" can be set.
Gamepad Stick Deadzone can be set between 10% and 85% of the gate radius.
To ensure your gamepad controls are working, you can open a Visualizer for your inputs by going to Options -> Video -> Display Inputs. These show the realtime inputs from your controller regardless of what else is happening ingame.

Directional Attacks - Similar to platform fighters, you get an entire moveset of grounded and aerial moves that change with the held direction!
Attack Chaining/Canceling - Ever play Turbo Mode in Smash Bros? Basically, land an attack and you can cancel into whatever the heck else you want.
Directional Dashing - Ever play Celeste? Like its dash? Cool! You get two of them here, and you can use them to dodge attacks or travel in any cardinal direction, grounded or in the air. (Yes there's wavedashing for those who want it) Timing a dash with an enemy's attack lets you dodge it and freeze time!
Break Attacks - Strong attacks that use up one of your dash charges; use these to break through enemy armor and counter their attacks, stunning them.
Dodge/Counter - Dash at the right time to freeze time! During this time, attack to hit the enemy with a stronger Break Attack, without using a charge of your dash!
Nodes - The green spinning Doritos floating around. Collect 10 of them and recover a health point!
Resonance %- A scaling damage/speed buff that ranges from 0-100%. Hit enemies and collect Nodes to maintain this buff and absolutely snowball in power. The catch? This power goes down when you get hit or idle around. Get in there and smack stuff up (skillfully) and you'll be handsomely rewarded!

I played this demo back during SAGE 2020 and was impressed by the general concept and many aspects of the game play such as the combination of high-speed platforming, Celeste-like Dash Mechanics, and beat'em Up style sections. It was truly great through and through and I could find very few flaws in the game back then. Now, with new, far more expansive demo, I feel as though I have an even better idea of what the final game might look like and honestly, I'd say it's looking to be a masterclass in the genre. As I had previously stated, I believe there was a lot of hard work, heart, and effort put into this lovely little demo and I think the changes made from the previous revision has really helped it have a more fluid game feel; ramping up the difficulty while keeping things fair and balanced. If I had one complaint, and it's not even really a complaint; more of a suggestion, I feel this game would greatly benefit from having voice acting because while I was flying though the stages at mach speed, I hardly had any time to read the dialogue between the two main characters as I was more focused on avoid obstacles than reading. That is all. Good Luck, Game Devs! I can't wait to see the finished project.
You've used some interesting tactics to get this game to be well known,
you make a fnf mod for this game
post it on newgrounds and itch.io

You've got passion and a goal and I support you all for that!

pros;
-damn fun gameplay
-satisfying punches
-he goes fast
-funky fresh beats
-unique sound design for everything
-damn you can spawn so many enemies during training mode yeah!!
-the madman put in the gong sound effect and the sonic mania ruby sound effect too
-the silhouettes of those diva designs look very promising
-this legendary dev also put in c-stick smash attacks? that's rad
-funny dialogue that has internet humour but isn't rudely forced down my neck tube


cons;
-method on getting A ranks isn't clear, how do you do it?
-the timeframe to time stop during dashing doesn't feel fluid just yet. Do you dash during near contact? dash a bit further away from the attack?

-down airiel should be cancellable via jump. in stage 3 during the boss when you run up the walls, i time stop the boss but then input a down heavy ariel which sends me all the way to the bottom.
-when reaching the goal, sometimes neon will stay on the right in place instead of going to the goal
-when pausing during training mode, the sandbag will vibrate alot. I imagine it just has internal anger from neon hitting it all the time


best of luck for your Kickstarter!
I can't wait for the spark the electric jester X Advent Neon crossover in 2098
Read more…

First.
New hotfix released! This will allow you to properly access the bonus level.
The text is overlapping, words are being bundled together every time a textbox opens


I was in the tutorial but it started looking like this

KJ Gamer said:
The text is overlapping, words are being bundled together every time a textbox opens

Yikes! This is the very first time I've seen anyone have this issue out of all the playthroughs and feedback I've seen, including for this newest version. May I ask what your PC's specs are? Make sure your graphics drivers are up to date, as well. This is looking like an issue with your PC's graphics processing, its compatibility with GameMaker or both, as I'm currently not certain what could be causing this specific an issue.
This was one of my favorite games from SAGE 2020 and one I have came back to time and time again, so I was really surprised to see how much better this build was. The atmosphere reminds me of Vectorman, but your character I feels has much more depth and attitude. I look forward to the future of this project.
This is honestly amazing. It's just the way the game mechanics mesh well with environments. I highly recommend playing this demo.
Definitly excellent, i'll buy the final release

But just one problem i found : sometimes the action is too frenetic to read the dialogues, personally i have difficulties for that (maybe because english is not my first language, if the game is translated maybe i'll have less difficulties)

PS : I found the little warning message when the game launch cute!! haha
You must log in or register to reply here.