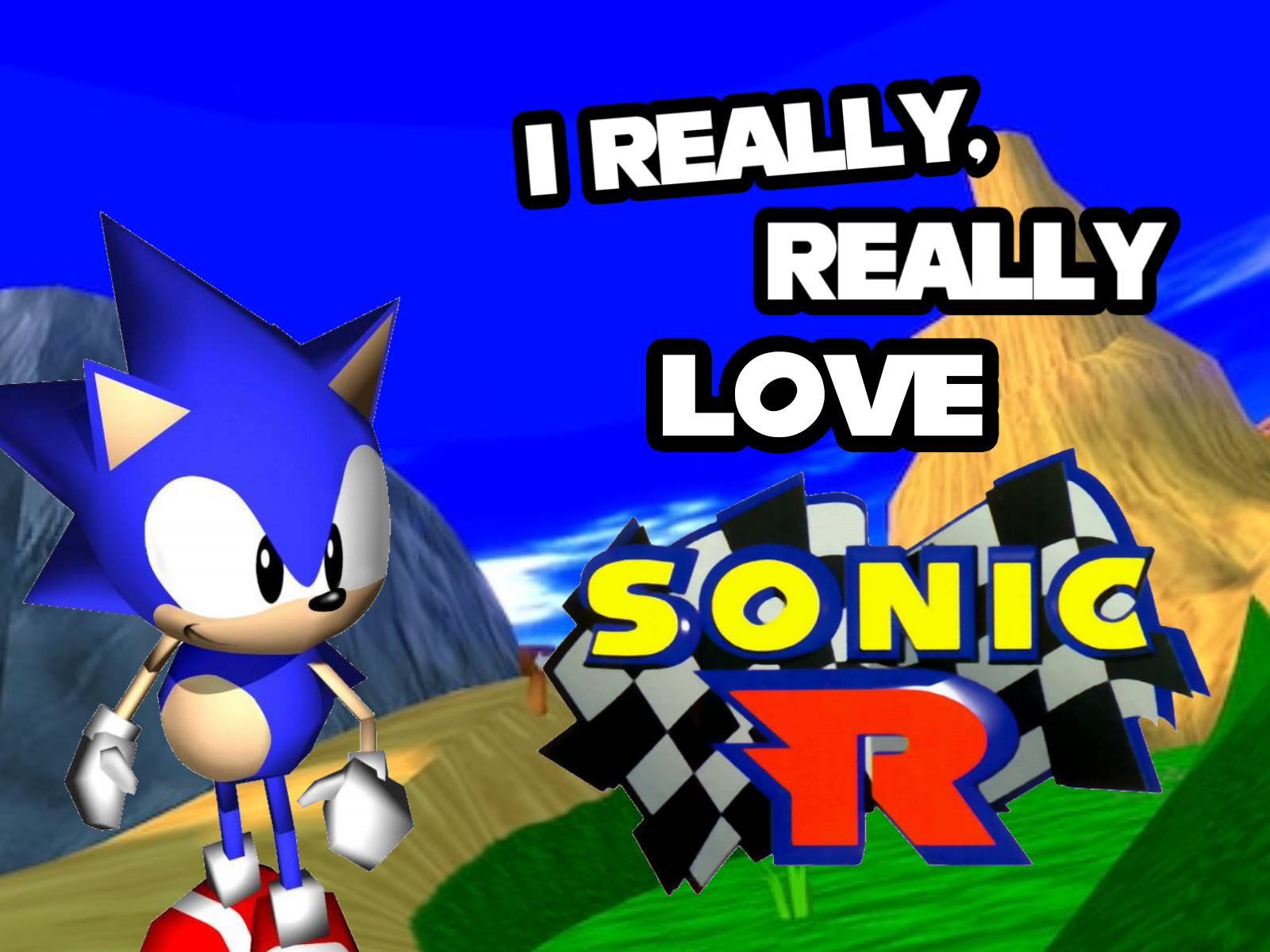 Don't worry, I know what you're thinking already
"Sonic R, that crazy Saturn game with the weird music and tank controls? How could anyone attempt to back the quality of THAT?"
fact of the matter is, this article isn't here to defend Sonic R's faults or devalue any form of critique against it. Instead I'd like to sit down and discuss the positives for
admittedly one of my favourite Sonic games of all time.

Sonic R needs absolutely no introduction, everyone and their grandma can hum the infamous "Can you feel the sunshine". The game released in 1997 for the SEGA Saturn and was inadvertently the true first 3D home console Sonic experience, what a mouthful. Although the game was praised at the time for its stunning graphics and presentation, its debatable whether the game actually aged well or not. I myself am a firm believer that Sonic R could've set the ground for an ideal 3D Sonic translated directly from the genesis titles, but more on that later. Without further adieu, the many positives of Sonic R!

The rich and faithful aesthetic!
Starting off with a relatively small yet largely disregarded point, Sonic R's environments are gorgeous not just from a technical stand point, but from an artistic perspective.
Part of what makes a Sonic environment memorable and stylised are the surreal and colourful concepts present in each zone. From the bumpy casino balcony tops of Spring Yard, to the glimmering Utopian carnival that is Stardust Speedway, Sonic never fails to impress when it comes to creative and wacky visuals. Sonic R manages to adequately and effectively capture this glorious aesthetic with its racetracks aswell, we have..
-A sandy deserted island filled with ancient structures and rocky waterfalls
-A groovy and colourful industrial city, packed with crazy highways and casino equipment
-A sunset temple in the middle of the ocean dedicated to relics of the Echidna tribe
-A high-tech energy facility with confusing corridors and futuristic machinery

Each and every course in the game embraces that tasteful aesthetic and even builds on established lore, what not with Regal Ruin being echidna territory. This presentation is extremely overlooked and for what exactly? A mystery for sure.

The music, the music, THE MUSIC!
I will be the first to admit that Sonic R's soundtrack is incredibly strange at face value, despite the unanimous agreement among Sonic fans that the music is fantastic, its not enough to justify the sudden change of genre. But when you think about it, is it really a change of genre? Sonic's main musical inspiration ever since the first instalment has been 80's and 90's hip-hop, reflecting the work of Bobby Brown, Dreams Come True and more directly Micheal Jackson. While the likes of Mario was all about developing a catchy tune that would fit on hardware, Sonic's music was always an integral part of the character and the games.
So tell me exactly...
If the franchise had built its musical foundation off of 20th century artists, why is Sonic R's music suddenly "weird"?
After all, the only difference in formula is the addition of vocals which as an effect has created arguably one of the most ear worm soundtracks in video gaming history.
tangent aside, composers Richard Jacques and TJ Davis do an absolutely phenomenal job with the soundtrack, capturing the levels and atmosphere very well. The beauty of Sonic R's music is that its appropriate for any occasion. Going to a party and need to shoot some catchy songs? Slap on Number One! Having a focused workout and need to zone into beast mode? Slap on Work It Out! You can't go wrong with these songs!

The interesting and easily repayable level design!
I really have to hand it to Travellers Tales here, Sonic R has arguably some of the most interesting track design for a racing game. Despite your goal being extremely linear, Sonic R goes out of its way to throw collectables, shortcuts and alternate routes to the player. This offers an extremely interesting and addictive element to the game which keeps players coming back for more. Not only does Sonic R encourage 3 separate runs of a stage with its scattered collectables, but offers an additional 4 variations of each track through modes of tag, reverse, balloon pop and time trials. With all of these variables at play, Sonic R easily surpasses its goal of being a fun multiplayer racing game, and even goes beyond with its single player content

The fantastic and surprisingly large roster!
Sonic R has a whopping character roster of 10 playable racers. All of these racers have their own models, animations and move-sets which is insane for a 3D Saturn game to achieve. Ontop of your favourites like Sonic, Knuckles, Tails, Amy and Robotnik, you've also got Metal Sonic, newcomers Tails Doll and Metal Knuckles, Egg Robo and Super Sonic. Even with some of these choices being a bit.....absurd, it's still charming to have all of these characters playable in a single Sonic title.

What Could've been the basis for a 3D Sonic platformer
Sonic R fantastically translates the basis and fundamentals of Sonic into a 3D space, staying faithful and respecting to the source material while simultaneously adding its own elements. I can't help but feel that the refined stepping stones of a true SEGA Saturn 3D Sonic instalment exist deep within the framework of Sonic R. From the open level design, to the varying abilities of each character, if you remove racing from the equation this game is practically a Sonic playground. Imagine what could've been if this grounding for 3D Sonic (i,e aesthetic, presentation, fundamentals) was fully realised by Sonic Team? Imagine a timeline where Travellers Tales were instead contracted to make a 3D Saturn/Dreamcast title instead of a Crash Bandicoot title? Its a crazy idea but the existence of Sonic R really excites me for a hypothetical continuation.

Sonic R has a plethora of flaws, ones that I won't even remotely attempt to defend, however I truly believe that Sonic R is a game with so much gold that's completely swooped under the rug, simply because we've been far louder about its negatives than its positives. Overall I love Sonic R and if you haven't checked it out yet? go check it out, you'll find yourself having a uprising amount of fun!

OMG, I agree so much with this article!

This is exactly why I made Sonic Revert, to have a spiritual sequel to this underrated gem which, in my opinion, has the perfect 3D Sonic gameplay.
I love this game too man, I wish it had a sequel. What do you think we talk to Traveler's Tale and SEGA about it?
You must log in or register to reply here.